Low cost – high resolution: 3D single-cell mapping of up to 100 gene targets in an intact Arabidopsis root with PHYTOMap 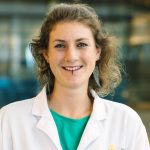 To ultimately understand the function of genes in a tissue and organ context, it is crucial to not only quantify gene expression in single cells, but also to identify the individual positions of these cells within the intact tissue. Isolation of specific cells for pooled RNA sequencing (RNAseq) in plants started in the early 2000s, for instance by using laser-capture microdissection to cut and isolate the tissue of interest with a laser beam under direct microscopic visualization, capturing subsets of cells via fluorescence-activated cell sorting (FACS), or isolating individually tagged nuclei (INTACT) (Asano et al., 2002; Birnbaum et al., 2003; Deal and Henikoff, 2011). The subsequently developed single-cell RNAseq (scRNAseq) technique was first applied to mouse primordial germ cells in 2009, and adapted for the use in plants a couple of years later, using isolated protoplasts which were manually collected based on a fluorescent reporter under a microscope (Tang et al., 2009; Brennecke et al., 2013; Efroni et al., 2015).

scRNAseq allows for the classification of cells into populations with similar transcriptomic profiles, thereby enabling the identification of certain cell types, such as the epidermis. Since the sampled cells are removed from their tissue context, however, all positional information for these populations is lost. This makes it challenging to classify and analyse cell populations that do not contain certain marker genes, for instance in plants that are less well-studied than the common model plant Arabidopsis. Furthermore, if experimental conditions only affect a subset of cells within a population, e.g. by a certain treatment, it is important to know where these affected cells are located, and if they form a spatially confined cluster within the population and tissue.

To accurately interpret scRNAseq data, the observed transcriptomic responses of individual cells need to be mapped back to the intact tissue. To date, the most common technique to spatially visualize gene expression in planta is the use of transgenic lines expressing transcriptional reporter proteins for the genes of interest. However, the creation of transgenic reporter lines is time consuming and tedious, and for some plant species even impossible. Another classic approach applicable to all plant species is RNA in situ hybridization, in which the mRNA of interest is directly targeted by RNA probes that can be detected by antibodies. However, mapping the transcription of only a single gene is insufficient to describe a cell population as observed in an scRNAseq experiment. Spatial transcriptomics, either by using spatially barcoded arrays or single-molecule fluorescence in situ hybridisation, are challenging because they require a single cell layer or thin sections, which is laborious in plant tissues and may again insert artifacts due to the sectioning. Additionally, with these techniques, information of the tissue environment is lost.

Ideally, spatial gene expression analysis of a large number of genes would be performed simultaneously at a single-cell resolution in an intact tissue context with minimal labor and financial requirements. And while this may sound illusory, in the publication highlighted here, Nobori et al. attempt to do just that with their PHYTOMapnyTM*, a method to spatially map the expression of multiple genes in whole-mount plant tissue at a single-cell level without the need for creating transgenic plant lines (Nobori et al., 2022). They develop a protocol for the Arabidopsis root tip and validate their method by mapping the gene expression of established marker genes and collating the expression to an scRNAseq dataset.

How a PHYTOMapnyTM is produced:

To produce a PHYTOMapnyTM, the root tissue is fixed and permeabilized, as it is for whole-mount RNA in situ hybridisation experiments. Hybridisation is performed with Specific Nucleic AcId Ligation (SNAIL) DNA probes targeted at the mRNAs of interest, which are labeled with gene-specific barcodes (Figure 1A). In the next step, the SNAIL probes are circularized and amplified in situ, incorporating amine-modified nucleotides into the amplicons to stably cross-link them to the cellular protein matrix. To then localize these barcoded amplicons, a multi-round sequencing-by-hybridization method is used, for which in every round four bridge probes are hybridized to four respective DNA barcodes, and then each bridge probe is tagged with one of four different fluorescent probes (Figure 1B). In an imaging step, using a standard confocal microscope, the four different targets can thus be detected in four different channels via their respective fluorescent probes. After the imaging, the probes are stripped and the next batch of bridge and fluorescent probes, targeting the next four DNA barcodes, are hybridized for the next round of imaging (Figure 1C). And so, with each round of probing and imaging, more transcripts can be added to the detailed PHYTOMapnyTM of one intact root.

The authors validated their approach by detecting transcripts of genes with well-known expression patterns, such as markers for different tissue types, and from a published scRNAseq dataset (Shahan et al., 2022). Additionally, they explored the multiplexing capacity of the method by targeting 28 genes in 7 rounds of hybridisation/imaging/stripping. For the combined analysis of the images from all rounds in one whole-mount image, the team developed an automated computational pipeline. For this, all images were registered in 3D, based on cell wall staining information cell segmentation was performed, and detected spots for the different transcripts were assigned to individual cells. According to the authors, the comparison between five roots yielded highly robust and reproducible data, detecting comparable numbers of transcripts for each RNA species between the different biological samples (See Movie 1). The data could be visualized as a Uniform Manifold Approximation and Projection (UMAP) without the input of spatial information and the clusters represent major cell types and developmental stages.

Why this preprint is important:

PHYTOMapnyTM will allow researchers to spatially and reproducibly map the expression of multiple genes at single-cell resolution within the same biological sample – an essential tool to get the most out of scRNAseq data. In this way, gene clusters that are identified in transcriptomic experiments can be assigned to specific tissues and cell groups in the intact plant. Furthermore, for Arabidopsis, the whole workflow can be performed at minimal time and labor costs. Time at the bench for the experimental work is similar to established RNA in situ hybridisation methods (Stahl and Simon, 2010): 4-5 days for sample preparation; for imaging, regular confocal microscopes can be used, with every round of imaging taking around 3 hours per root tip or 5 hours per five root tips. Using similar methods, it was shown that more than 25 rounds with new bridge probes and fluorescent probes are possible, so PHYTOMapnyTM can possibly map up to 25 x 4 =100 genes (Lee et al., 2015). As for the cost, commercially available tools to map the expression of several genes to tissues is offered by several companies, e.g. by localizing gene expression using 100-plex combinatorial single molecule fluorescence in situ hybridization. However, the cost for such commercial offers usually tallies up to several thousand dollars, and they are thus not affordable for many research groups. In contrast, for a 28 gene PHYTOMapnyTM, the authors calculate the cost to an approximate total of $80, and $230 for 96 genes, making this an experiment affordable for a broad range of researchers. Furthermore, by using intact plants, any artifacts or information loss due to sectioning of the tissue can be eliminated.

One major limit of PHYTOMapnyTM at this stage is that it has so far only been tested on Arabidopsis root tips. A main challenge therefore lies in the adaptation of the technique to other tissues, and, even more importantly, other plant species, especially non-model plants. The in vivo analysis and validation of gene expression using (e.g.) fluorescent reporter lines is routinely done in Arabidopsis (albeit simultaneously for 1-4 genes, not 1-100), but poses a significant challenge to researchers working on more complex plants that cannot (easily) be transformed. PHYTOMapnyTM holds the potential to massively accelerate research on such plants, if it can indeed be adapted to them. However, it is not clear if SNAIL probe and dye penetration would work as well in other tissue than the relatively small and thin root tip, which furthermore has the advantage of incomplete endodermal barrier formation, facilitating uptake of probes and dyes into the vasculature. More complex roots may require additional sectioning steps. For most plant species, RNA in situ hybridisation is still based on microtome tissue sectioning after embedding in paraffin (Zöllner et al., 2021), which results in flat layers of a few cells and therefore the 3D resolution of the approach would be lost. For these sections, the PHYTOMapnyTM protocol must presumably be highly modified. Another approach to deal with thick tissues is to section them by vibratome after the fixation without paraffin embedding, which has been used for whole-mount RNA in situ hybridisation on date palm tissues (Xiao et al., 2019). For this, only slight changes in the PHYTOMapnyTM protocol might be sufficient, and the 3D resolution would partially be maintained, because the sections consist of multiple cell layers.

In summary, spatial transcriptomics in plants is still in its infancy, but the PHYTOMapnyTM presented by Nobori et al. is a big step in the right direction. 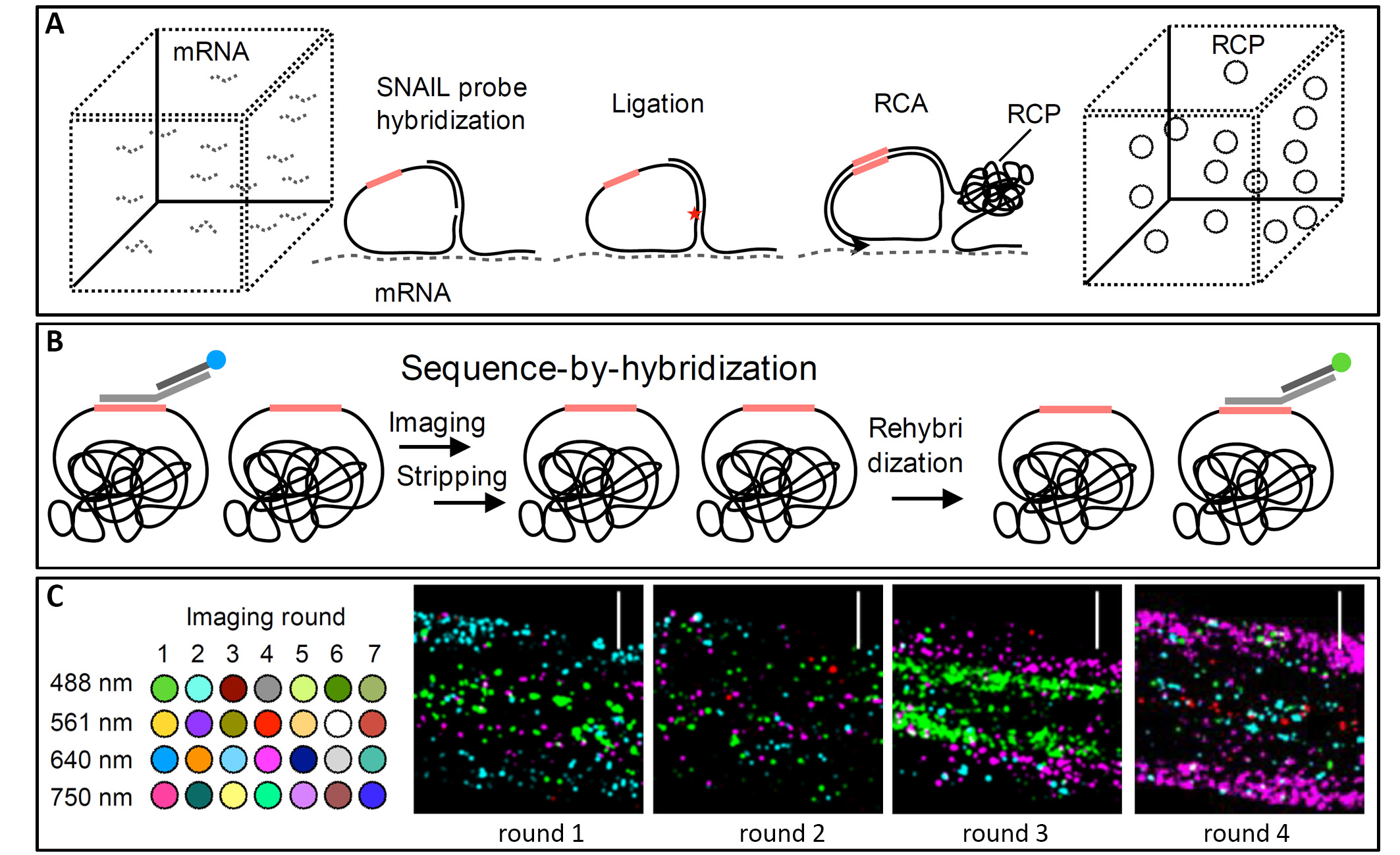 A) Experimental approach of PHYTOMapnyTM for probe hybridisation, ligation and amplification in situ. B) Sequence-by-hybridisation chemistry for sequential rounds of imaging by probing, imaging, and stripping. C) Set-up of the imaging rounds (left) and representative images of Arabidopsis root tips at different imaging rounds, with the four different fluorescent probes in blue, pink, green and red, shown as maximum exposure of z-planes at the same position (right), scale bars 30 μ Modified from (Nobori et al., 2022).

Movie 1: Proof of concept by mapping of four different genes per root; displayed are 3D projections of the root tip. Taken from (Nobori et al., 2022).