Are you ready for your close up? Cryo-EM identifies microtubule binding proteins and actin filaments inside the mammalian primary cilium

Cilia are ubiquitous, microtubule-based organelles that protrude from the surface of eukaryotic cells1. They come in two flavours: primary cilia, which act as antenna for various extracellular signals; and motile cilia, which beat like a propeller to move either the cell itself or to waft extracellular material such as mucus. Both types of cilia share a similar overall structure consisting of a core ring of nine microtubule doublets (the axoneme), which extends from the mother centriole and is enclosed by the ciliary membrane. Motile cilia have an additional pair of microtubule doublets in the centre (9+2 vs 9+0 arrangement).

For a cilium to function and maintain its structure, ciliary proteins such as tubulin and signalling molecules must be transported along the axoneme by specialised intraflagellar transport (IFT) machinery. Cargo molecules are assembled onto large protein complexes called IFT particles which move collectively in trains. Within the particle, sub-complex IFT-B couples to the motor protein kinesin-2 for anterograde transport to the ciliary tip. The IFT particles then rearrange and the sub-complex IFT-A couples to dynein-2 for retrograde transport back to the ciliary base. 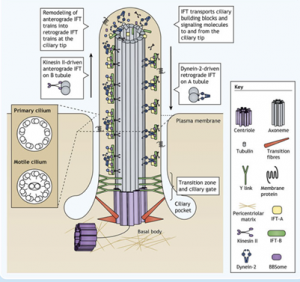 The basic structure of the axoneme of both motile and primary cilia from various cell types has been known for some time thanks to transmission electron microscopy (EM). However, our knowledge of the more refined details of ciliary sub-structures is almost exclusively derived from cryo-EM studies of the flagella of the algae Chlamydomonas reinhardtii2-4. These flagella display a 9+2 microtubule arrangement characteristic of eukaryotic motile cilia and flagella more broadly and thus their study has been useful. However, from the little information we do have from other organisms, we know that there is great variation in ciliary structures between species and cell types. A large number of diseases, known as ciliopathies, have also been linked to defective primary cilia function rather than motile cilia function. Thus, there is an unmet need to investigate other types of cilia in the same level of detail as the C. reinhardtii flagellum.

The sticking point for such investigations has always been technical. C. reinhardtii flagella are large compared to the cell body and fully protrude from the cell surface. There are also two per cell. Thus, they are accessible, obtainable in large numbers, easily shed and amenable to preservation and imaging in a way that other cilia are not. This study from Kiesel et al circumvents previous technical blockades and provides for the first time a detailed structural analysis of the interior of a mammalian primary cilium by cryo-electron tomography (cryo-ET).

Firstly, using transmission EM the authors show that the 9+0 arrangement of microtubule doublets is quickly lost along the axoneme of primary cilia from MDCKII cells (canine kidney cell line), with only singlets present in the distal ¾ of the cilium. Surprisingly, both the microtubules and the axoneme in these cilia are also twisted unlike in motile cilia.

For greater structural insight, the authors develop and validate a method to isolate cilia for cryo-EM by pressing poly-L-lysine coated EM grids onto the apical membrane of MDCKII monolayers and then pulling away. This leaves the intact cilia stuck on the grid. Grids are then plunge-frozen and imaged by cryo-ET.

Using this method anterograde IFT trains measuring up to 900 nm were identified by cryo-ET on microtubule singlets. This suggests that different mechanisms of IFT regulation are in place in primary cilia than in motile cilia where anterograde and retrograde IFT occur on different tubules of each microtubule doublet to avoid collision. The structure of the IFT trains were consistent with those of Chlamydomonas.

Another key observation was that microtubule internal proteins (MIPs) are sporadically seen inside the microtubules associated with either the tubule wall or the lumen. MIP decoration was not periodic unlike in motile cilia.

The outer surface of the microtubule singlets, on the other hand, was decorated periodically with a globular density thought to be consistent with EB1 protein. Immunofluorescence confirmed EB1, normally a microtubule tip protein, is in fact bound all along the axoneme length.

Finally, the authors identify periodical helical and filamentous structures intertwined with the microtubules. These bear the structural characteristics of actin filaments and again immunofluorescence confirmed the presence of actin within the cilium.

In conclusion these results support other studies calling into question our models of axonemal structure and IFT mechanisms, and also provide novel and exciting structural insights into a potential role for EB1 and axonemal actin in reinforcing microtubules to strengthen the cilium.

I chose this paper because it provides both a technical and intellectual leap forward for cilia biology. This information has been long awaited and it is exciting to see the authors overcome the technical challenges that have previously precluded these discoveries. It is also a great example of how structural detail can be used to inform function and will leave the field questioning what we thought we knew about the inner workings of the primary cilium and especially the mechanism of IFT.

Answer: We sporadically see electron-densities connecting the actin filaments with the microtubules or with the ciliary membrane in our raw cryo-electron tomograms. However, the investigation state in which we currently are doesn’t allow us to make more definitive statements.

Answer: Currently, we do not have experimental evidence that actin filaments contribute to axonemal stability, and we can only speculate on this additional function. It would be interesting to investigate how the number and distribution of actin filaments changes in cilia that are exposed to different flows. Your idea of ciliary length being correlated with the appearance of actin filaments is also interesting. Our method tends to isolate longer cilia and it might very well be that this biases our observations.

Previous studies from other labs, showed that actin accumulates in the cilium at the site of membrane pinching, in response to specific signaling processes. In some of our cryo-tomograms, we observed vesicles on the outside of the ciliary membrane in correspondence of actin filaments on the inside of the membrane. However, we were not able to image any membrane pinching event and it remains unclear whether the actin filaments that we observe are involved in membrane remodeling process.

Answer: As you say, in C.elegans there are two different IFT kinesin motors, and only one of them is able to move along singlets. Also in MDCK cells we find two different IFT associated kinesin motors. However, only one of them, kinesin-II, is strictly required for IFT and ciliary assembly. The second motor, KIF17, is dependent on IFT for its entry into the cilium, but is not involved in powering anterograde train movement. This seems to indicate that MDCK primary cilia use a different mechanism to regulate IFT logistics than motile or C.elegans cilia.