Structure of a cytochrome-based bacterial nanowire

Will the world one day be powered by biological nanowires? Insights from the CryoEM structure of a new electrically conductive pili may provide some answers 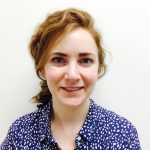 Many bacteria express pili, long hair-like structures which can be used for motility, transfer of DNA and proteins, and anchoring to surfaces. A subtype of pili, called electrically conductive pili (e-pili), is sparking interest across disciplines. These e-pili can be hundreds of nm to µm long and the bacteria use them for extracellular electron transfer (EET). The e-pili allow EET to other species, which is important in anaerobic environments, and provide an EET route for reduction of Fe(III)oxides, which is important for biogeochemical processes. Furthermore, EET can also occur through biofilms1. The interest in e-pili is interdisciplinary, there is potential to use e-pili for bioenergy, bioremediation, sensing technologies, bioelectronics for wearable sensors or therapeutics 2,3. The mechanism of EET down the e-pili is thought to revolve around the π-π stacking of aromatic amino acids in some pili, but the field is still young and more experimental data is needed to confirm the mechanisms of electron transfer.

Filman et al. identify a novel type of e-pili composed of OmcS monomers, a six heme c-type cytochrome consisting of 407 amino acids. This is the first heme based e-pili recognised and it differs from other identified e-pili in Geobacter sulfurreducens, which are formed of the PilA protein. Previous papers have suggested OmcS to be associated with or positioned at the end of the PilA based e-pili to facilitate electron transfer out of the e-pili. In this study the authors use CryoEM to determine the structure of these new OmcS e-pili, which differ morphologically from the PilA e-pili, being 4 and 3 nm wide, respectively. They found that only OmcS monomers could provide a fit to the density of the 4 nm e-pili of the CryoEM image. The entire e-pili is formed of OmcS monomers in helical symmetry, with the heme component at the centre of the core. Furthermore, the distance between hemes is ≤ 3.9 Å which may allow transfer of electrons over long distances. This provides a drastically different mechanism of EET compared to the aromatic residue π-π stacking mechanism proposed for the PilA e-pili. The central heme stack of the OmcS e-pili is protected from the solvent by the rest of the amino acid sequence which wraps around. Further studies will define the entry and exit routes of the electrons, but are proposed to be via two solvent exposed hemes, 929 and 969. 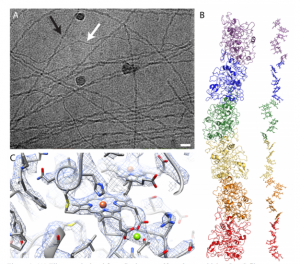 I read the abstract of this preprint and thought ‘wow I didn’t know that, how cool’. I hadn’t heard of e-pili before and it was interesting to learn about this electrically conductive property some bacteria have. This paper is not only uncovering a novel e-pili in G. sulfurreducens, but introducing a new heme-to-heme electron transport system which could be utilised in other areas such as electronic devices.

Is there experimental data to show EET through these OmcS e-pili?

Site directed mutagenesis or chemical modification of important residues in the OmcS protein may give rise to the mechanisms behind the electron transfer.

It will be interesting to understand the importance of the Mg2+ in the OmcS monomer.