Ocean acidification can directly as well as indirectly affect feeding and avoidance behavior in the benthic community. 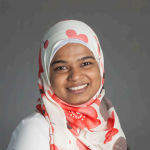 Ocean acidification or pH drop is progressing at an alarming rate and poses a great threat to intertidal benthic organisms. A constant shift in water pH level compels these organisms to live at their physiological tolerance limit, making them interesting model species to study the effects of climate change. These organisms rely on different behavioral and physiological pathways to avoid and/or adjust to these changes, among which chemical signaling is a crucial one. However, ocean acidification can disrupt this chemical signaling in the aquatic environment and thus requires more scientific attention.

Although the effect of biotic stressors on chemical communication has been studied in the past, the effect of abiotic stressors, such as pH drop, is still not well studied. Here, Feugere et al. studied the direct and indirect effects of pH drop using a ‘stress metabolite’ approach from conspecific and heterospecific donors to understand the importance of chemical signaling and their dissemination capabilities. Upon dissemination, stress metabolites can cause an indirect stress propagation in the conspecifics and/or heterospecifics creating a positive feedback-loop. Therefore, the authors hypothesize that an acute pH drop will both directly and indirectly cause behavioral change in their sample species (small hermit crab Diogenes pugilator, green shore crab Carcinus maenas, and harbor ragworm Hediste diversicolor).

To test this hypothesis, they exposed the sample species to control pH 8.2 with control metabolite (CM), pH drop 7.6 with control metabolite (pH drop), control pH 8.2 with stress metabolite (SM), and pH 7.6 with stress metabolite (pH drop+SM). The authors also tested the effect of SM from their vertebrate predator gilt-head sea bream Sparus aurata on each sample species. The effects of aforementioned treatments were investigated on the escape mechanisms and ‘time-to-success’ (the time to find a feeding cue for crabs and to bury the head entirely in the sediment for ragworm).

In the small hermit crab, Diogenes pugilator, time-to-success was significantly affected by pH drop and SM from S. aurata (Fig. 1B). Avoidance response in D. pugilator was significantly higher in response to SM from S. aurata (69%), but pH drop did not have any effect (Fig. 2). In green shore crab, Carcinus maenas, time-to-success was not affected by any of the four treatments when exposed to SM from conspecifics. However, when S. aurata was the metabolite donor, lower feeding success was noticed in response to pH drop and SM (Fig. 1). Similarly, when exposed to metabolites from conspecific donor, no effect of CM, pH drop, SM, and pH drop+SM was significant on the avoidance response of C. maenas, but exposure to S. aurata metabolites caused a significant increase in their avoidance activity in pH drop, SM and pH drop+SM treatments (Fig. 2). 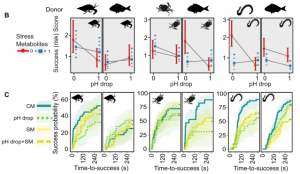 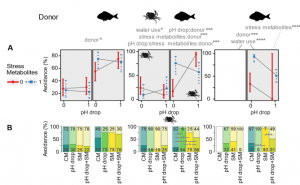 In this preprint the authors tried to unveil the role of chemical signaling in response to an abiotic stressor, pH drop. Climate change is progressively challenging the organisms living in the intertidal zone by impacting the abiotic parameters of the water, and ocean acidification or pH drop is among one of them. The fact that the authors studied the effect of pH drop on an intra- and interspecific level using stress metabolites sheds new light on the study of metabolomics and its importance on the study of eco-physiology. This study also allows us to think about how stress metabolites can propagate from an individual to a population level and create awareness among different organisms.

Future implications and questions to authors

What metabolites were the dominant ones and how do these metabolites create an awareness (in which potential pathways) to the studied organisms?

The effects of pH drop on small hermit crab and ragworm are more pronounce compared to green shore crab. Is it possible that this is due to the mobility of the chosen sample species; ragworm and hermit crab having less mobility than shore crab?

Yes, as it is often the case, our answer in this study was – “it depends”. The reaction of recipients depended on the donor of the metabolites, but also on who was the recipient. For example, the ragworms reacted uniformly to Sparus aurata stress metabolites as also to their own pH-induced stress metabolites, but the same did not apply to crabs. Since this study was limited to behavioral (avoidance and time-to-success) and physiological (respiration rates) measurements, the honest answer is – we don’t know yet which metabolites were present here, and to which extent they were different among species. However, what we do know is that in both cases (conspecific and heterospecific donors), the metabolites released through pH stress are either different, or more than 10 times more concentrated, than the ones regularly released in the absence of pH stress (with our control being “control metabolites”, see Supplementary Information, Figure S6).  But stay tuned, we are currently working on a metabolomic characterization of similar stress metabolites, which were induced by thermal stress in zebrafish embryos (read our matching preprint here: https://doi.org/10.1101/2021.04.07.438623), which will hopefully shed light on the nature of the chemicals that can constitute stress metabolites.

Nevertheless, there are several possible explanations that could account for the observed variations in response to conspecific versus Sparus aurata stress metabolites, ranging from experimental sources (e.g., relative concentrations of cues, number of donors, conditioning protocol) to physiological reasons inherent to the donors’ differential response to acute pH drop between S. aurata and benthic invertebrates. It may be that the conspecific and S. aurata donors produce different types of metabolites, in different concentrations and relative ratios, which would differentially affect the behavior of the recipients. In addition, variation in the behavioral response to S. aurata cues may be explained by predator-prey relationships.

Pending chemical characterization of these metabolites, our study nevertheless allows us to shed light on the existence and potential role of the stress metabolites: they are specifically released upon pH stress, but not, or only to a lower extent, in an optimal pH environment. It is possible that stress metabolites may in fact be a cocktail of different compounds including chemicals resulting from the metabolic stress response, the purpose of which is to restore homeostasis. Further work will be necessary to unveil whether these stress metabolites are true signaling molecules (i.e., purposefully released to alert others of an upcoming threat), or if they are simply byproducts of the stress response (in this case, response to pH alteration and CO2) which are passively released into the environment and upon which bypassers eavesdrop and react accordingly.

While the novelty in our preprint is that such metabolites can be released by abiotic stressors such as acidified pH, there is a large body of literature on cues that are released by biotic stressors. From this we can see that disturbance cues released upon predation stress induce alertness in recipients in order to induce a response to deal with the imminent threat. Stress metabolites could be detected at sensory epithelia, either actively via receptors or passively via membrane diffusion depending on molecular properties, and then activate behavioral responses. In this preprint, this is a behavioral stress response (comparing the behaviors we observed to other papers where crabs or polychaetes showed stress behaviors, and to responses of these animals to the pH shock itself). However, we can add here evidence from our zebrafish preprint (linked above) that shows that this can in part also be a physiological stress response involving ROS (reactive oxygen species) and the immune system. We can therefore assume that such “positive feedback loops” provide the recipient with an anticipatory stress response to the risk of acute abiotic stress. The molecular pathways along which such information could travel are as little understood as the metabolites themselves, but there are studies that link acidified pH response to altered olfaction mediated by GABAA receptors (e.g., Chivers et al., 2014), and social alarm cues increasing whole-body cortisol which indicates activation of the HPI axis (e.g., Barkhymer et al., 2018). To shed some more light on these pathways, we are currently looking at transcriptomic data of the harbor ragworms exposed to pH drop-induced stress metabolites from this same experiment. This will hopefully help to elucidate the molecular pathways activated by stress metabolites in the recipients.

This is indeed a possible mechanism by which pH drop could induce different responses in the three tested species. The two crab species used alternative strategies to respond to the acute pH stress. As shown in Figure S1 (Supplementary Information), green shore crabs tended to attempt to escape the testing arena more often than small hermit crabs. Conversely, small hermit crabs used a dual strategy as they, in addition to escaping, were more prone to freezing whereby they retreated into their shell – which shore crabs weren’t able to do. Intriguingly, we noticed that this dual response in small hermit crabs often was characterized as an initial freezing period followed by an escape attempt shortly afterwards. It is also worth noting that the behavioral assays were different – for crabs we looked at how successful they were at finding a food cue, whereas for the ragworms we looked at sediment burrowing speed – so there were different trade-offs to make for these animals, either between actively seeking food vs freezing/escaping, or to alter a behavior the worms naturally do once removed from their sediment. The reason for this was that for this experiment, we couldn’t really convince the ragworms to come out of their burrow to feed in exposure to cues, something that we normally regularly achieve in our labs. Interestingly, our harbor ragworms were delayed in their burrowing response by the stress metabolites by displaying a behavior pattern which is normally associated with extreme physiological stress, such as ‘playing dead’, freezing, everting the proboscis, and sideways-undulating movement.