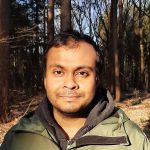 Our intestines are constantly under attack from food-borne infections. In addition to the direct damage caused by the pathogens, the accompanying inflammatory responses cause prolonged secondary damages to the gut tissue. The gut lining (epithelium) is capable of regeneration after damages from such attacks [1]. However, the underlying enteric nervous system (ENS) has limited regeneration potential [2]. Damages to the ENS leads to impairment of gut motility, the stretching and contraction of the gastrointestinal muscles. Gut motility is essential for movement of food through the intestinal system, meaning  any damage to the ENS can lead to severe digestive issues such as irritable bowel syndrome. It is therefore crucial to protect the ENS from infection by enteric pathogens and the inflammation that occurs as a result.

A previous study from the laboratory of Daniel Mucida at The Rockefeller University looked into such protective mechanisms. They found that infection by spiB, an attenuated strain of Salmonella typhimurium, has the potential to cause significant ENS damage in mice, but that the neurons protect themselves by activating gut dwelling muscularis macrophages (MMs) by adrenergic signaling. Importantly, activated MMs produce polyamine compounds that protect enteric neurons from inflammation mediated damages [3]. Activation of MMs is an innate immune response, and not specific to a particular pathogen. In the current preprint, [4] Mucida and colleagues explore the intriguing possibility that activation of innate immune responses by enteric infections might offer some degree of protection for the ENS from future attack by unrelated pathogens.

Using the previously characterized model of ENS damage in mouse intestines [3], the authors explored whether infection by food-borne pathogen Yersinia pseudotuberculosis (Yp) can protect against subsequent infection by spiB. They found that Yp infection caused relatively moderate ENS damage, but prevented further ENS damage and loss of gut motility by subsequent spiB infection. Yp infection activated MMs through adrenergic signaling, and the sustained production of polyamines by these activated MMs was crucial for ENS protection from the later spiB infection. While this observation is relevant from a disease tolerance perspective, it is not entirely unexpected that the immune responses to two bacterial pathogens would be similar and therefore offer some degree of cross-protection.

What came as a surprise was that infection by an entirely different kind of parasite, the helminth worm, Strongyloides venezulenesis (Sv) could protect against subsequent spiB-induced ENS damage. Sv infects a completely different portion of the intestine (duodenum) than the region colonized by spiB (ileum), so the protection mechanism induced by Sv appears to be operating across different domains of the intestines. Using elaborate genetic and immune perturbations, the authors teased apart the molecular basis of this protection. While Sv infection also involved polyamine production by MMs, the mechanism of MM activation was completely different from that of bacterial infections. Unlike the adrenergic route induced by Yp, Sv infection activated MMs through type-2 immune response, an innate immune pathway specifically induced by helminth infections [5]. Sv infection resulted in accumulation of helper T lymphocytes in the gut. These helper T lymphocytes in turn stimulated proliferation of another type of white blood cells, the eosinophils. Interleukin-4 and interleukin-13, two signaling proteins made by these activated eosinophils, ultimately led to increased polyamine production by the MMs, ensuring neuronal protection.

The authors have provided a broader perspective of their findings by looking into pet store mice. Unlike laboratory animals reared in near-sterile conditions, these mice are exposed to many more pathogens and therefore expected to have a more active innate immune system. The pet store mice had higher baseline levels of interleukin-4 and -13 than their lab-grown counterparts and unsurprisingly, were more resilient to spiB induced ENS damage. Having some dirt around is good after all, at least for the mice!!

Why I chose this preprint?

The ongoing global pandemic has drawn our attention towards immunity and hygiene. There is no doubt that keeping good hygiene is essential to keep many infections at bay. On the other hand, an alternative notion was proposed by D.P Strachan in 1989, who suggested that being exposed to pathogens early in life is a good thing, as it helps to build immunity and reduces autoimmune disorders. It is a stretch to make such a blanket claim about hygiene being the cause of autoimmunity, but , research spanning decades have pointed towards a positive role of mutualistic and commensal microflora in bolstering our immune system. Helminth worms, although parasitic, have been demonstrated to have a positive role in reducing allergic reactions and autoimmune disorders [6]. This preprint by Ahrends et al., [4] sheds  new light on the protection that helminths can offer against nerve damage caused by a bacterial pathogen. Additionally, the study has generated elegant genetic, pharmacological and immunomodulatory tools to dissect immune pathways, which will provide a wealth of resources for future studies.

The study has used a mouse model, can the findings be extrapolated to human context? Can helminth infections or helminth derived immunogens prevent human diseases like irritable bowel syndrome?

In addition to shaping metabolism and the function of major organs, coevolution with commensal and environmental microbes and ‘old friend’ infections appear to be required early in life for induction of the regulatory networks that prevent autoimmunity and allergic inflammatory responses. Increase in the incidence of IBS coincides with dysbiosis of the microbiota resulting from the sudden and swift eradication of organisms like helminths in rapidly developing societies. Immunological pathways activated in response to helminth infections seem to balance the unwanted and overt inflammation. It is therefore likely to apply findings from this field to better understand and prevent certain gastrointestinal disorders.

The key mechanism of neuroprotection by MMs seems to originate from polyamine production. Can dietary polyamine supplementation have a similar neuroprotective effect?

Our previous work (Matheis et al., 2020) shows that supplementing polyamines (in this case, spermine) in the drinking water resulted in decreased neuronal loss upon Salmonella infection.

In the context of Sv infection, only duodenum derived eosinophils seem to offer EAN protection. Yet, the authors suggest induction of bone marrow hematopoietic progenitors by Sv How can eosinophils generated from the same ‘activated’ bone marrow have location specific activity later on?

We hypothesize that this effect is due to a distinct microenvironment present the duodenum. Already at steady state duodenum harbours significantly more eosinophils when compared to other intestinal segments. Chemokines responsible for increased eosinophil trafficking (such as CCL11) can also induce higher production and secretion of certain cytokines.