Do epigenetic changes contribute to aging? A recent preprint shows that histone H3K27 methylation is a critical determinant of longevity in flies. 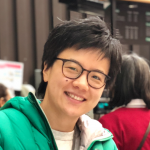 Summary of the preprint

In the current study, Ma et al. combined genome-wide histone profiling with powerful fly genetics to identify age-associated changes in H3K27me3 as a critical determinant of longevity and organismal fitness. The authors first made the interesting observation that, just like in mammals, aging flies display an overall increase in H3K27me3, especially in the regions that have low methylation levels in younger animals. Using genetically modified flies with altered levels of H3K27me3, the authors demonstrated that the level of H3K27me3 was inversely proportional to longevity, providing strong support for the global increase in H3K27me3 as a driver of the aging process. Furthermore, the authors discovered that increased H3K27me3 contributes to aging through a selective inhibition of glycolytic genes, which in turn altered glucose metabolism and redox state that accelerated aging. The authors’ findings are summarized in the diagram below extracted from figure 7 of their preprint.

Why this preprint caught my eye

Epigenetic changes have long been associated with aging; in fact, DNA methylation profiling provides one of the best predictors of biological age in both human and mouse (Hannum et al. ; Stubbs et al. 2017). Whether such epigenetic changes represent a driver or merely a passenger of the aging process remains unclear. Taking a genomic approach that linked global changes in H3K27me3 patterning to glycolysis, this study unequivocally established age-related changes in the epigenome, which is observed across the phylogenetic tree, as a driver of the aging process.

Several interesting questions arise from this study: Why do global changes in H3K27me3 selectively target glycolytic and redox genes, yet spare the more canonical polycomb targets such as the Hox gene family? Can EZH2 (a H3K27 methyltransferase) inhibitors that are currently in clinical trials increase longevity by preventing age-associated changes in H3K27me3 and glycolytic genes? Considering that similar shifts in metabolism occur in cancer, how might results from this aging study contribute to our understanding of the link between epigenetics, aging, and cancer? 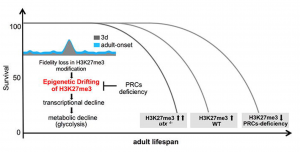