The Histone H3-H4 Tetramer is a Copper Reductase Enzyme

New study finds an unprecedented, but ancient, role for histones as enzymes. The histone H3-H4 tetramer is a copper reductase that may have facilitated the emergence of eukaryotes. 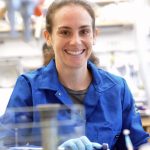 2.45 billion years ago, the rise of oxygen-producing bacteria resulted in drastic oxygen accumulation in the Earth’s atmosphere. In addition to organic compounds, such as amino acids, carbohydrates and nucleic acids, a number of transition metals are important for the chemistry of living systems. However, this Great Oxidation Event led to significant changes in abundance and oxidation states of such transition metals that not only altered their usability, but also increased their toxicity.

Copper is a required co-factor for enzymes in a number of biological pathways including oxidative respiration, anti-oxidant defense, melanin production, and tyrosine metabolism. Although the majority of environmental copper is found in the oxidized cupric (Cu2+) form, it is the cuprous (Cu+) form that is transported intracellularly. It is not well understood how this pool of cuprous ions is maintained in the cell.

Interestingly, eukaryotic nucleosomes, the basic structural unit of chromatin, have been found to bind copper and other ions, although the functionality of this binding is unknown. Nucleosomes are composed of DNA wrapped around two copies of each histone proteins H2A, H2B, H3 and H4. Histone proteins are not only important structural elements for DNA, but also have additional regulatory roles. Intriguingly, certain archaeal prokaryotes have nucleosome-like structures despite the fact that they have small genomes, no nucleus and no apparent epigenetic regulation, suggesting that histones may have another function that predates the emergence of eukaryotes.

Attar, Campos, Vogelauer and colleagues have uncovered a surprising, but likely ancient, role for the nucleosome as a copper reductase. They show that the histone H3-H4 tetramer has conserved enzymatic activity that generates usable copper for multiple cellular processes. Given that the evolution of eukaryotes coincided with the Great Oxidation Event, these findings suggest that enzymatic activity of ancient histones may have contributed to the emergence of eukaryotes by providing usable copper to early mitochondria.

Within the assembled nucleosome, a pair of histidine residues (H3H113), one from each apposing H3 histone, help form a pocket capable of binding metal ions. The authors observe that mutation of the histone H3 histidine to asparagine (H3H113N) leads to defects in pathways known to require copper. Yeast cells containing this mutation (H3H113N) require a large excess of copper for proper mitochondrial respiration and lysine biosynthesis. Defects are particularly pronounced upon deletion of a Cu+-ion specific transporter, suggesting that H3H113N mutation decreases intracellular Cu+ levels.

Surprisingly, the authors observe that overall levels of intracellular copper are unaffected in H3H113N cells. Additionally, gene expression and chromatin accessibility are unchanged by H3H113N mutation. Because defects observed in H3H113N cells indicate a loss of cuprous ions, the authors suspected that histone H3 could directly affect copper oxidation. Indeed, in a series of elegant biochemical assays, the authors show that histone H3, when present as a tetramer with H4, has enzymatic activity and catalyzes the reduction of Cu2+ to Cu+ (Figure 4B). Consistent with phenotypic observations, the H3H113N mutation decreases the copper reducing activity of H3-H4 tetramers. 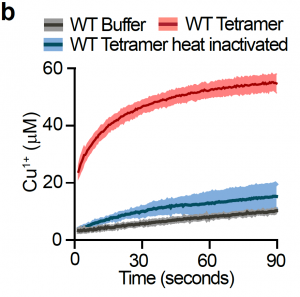 Figure 4B from the preprint: Progress curves of copper reduction by human H3.2-H4 tetramer, heat-inactivated tetramer or buffer.

Both human and yeast tetramers reduce copper, suggesting that catalytic activity is conserved throughout eukaryotes. However, yeast histone H3-H4 tetramers did not reduce copper as well as human H3. It has been shown that a cysteine residue (H3C110), which exists in most species but is lacking in yeast, helps form the metal-binding pocket. The authors find that the presence of H3C110 substantially increases the enzymatic activity of human histone H3-H4 tetramers. In fact, introducing H3C110 in to yeast H3 not only increased copper reduction, but also improved respiratory growth in copper limiting conditions.

Histones were once thought to be no more than inert structural proteins: packing material for eukaryotic DNA. However, they have proven to have some of the most dynamic roles in the cell. Histones have important roles in DNA replication, gene expression regulation, transcription elongation dynamics, RNA processing, and DNA damage. And now, Attar, Campos, Vogelauer and colleagues have revealed a completely new role that changes the way we think about histones. DNA is wrapped around an enzyme, whose catalytic activity has important consequences for processes throughout the cell. Most excitingly, this role likely predates many of the previously known functions of histones. Reductase activity of early histones likely increased availability of cuprous ions to important biological pathways, which allowed for the rise of more complex organisms and facilitated eukaryogenesis.