Plants perceive light with a diverse set of photoreceptors, among them the red/far-red light-sensing phytochromes (phyA-E), the blue light-sensing cryptochromes (cry1, cry2) and the UV-B-sensing UV RESISTANCE LOCUS 8 (UVR8). The signalling cascades downstream of these photoreceptors converge on the regulation of a central repressor of light signalling, a complex of CONSTITUTIVELY PHOTOMORPHOGENIC 1 (COP1) and SUPPRESSOR OF PHYA-105 (SPA) proteins. In darkness, this COP1/SPA complex ubiquitinates positive regulators of the light response and thereby targets them for degradation via the 26S proteasome. In the light, photoreceptors inhibit COP1/SPA activity, allowing positive regulators of the light response to accumulate and promote light-induced gene expression1.

Several mechanisms have so far been described for photoreceptors to control COP1/SPA activity1,2: (1) Prolonged exposure to light leads to exclusion of COP1 from the nucleus, which is dependent on phyA, phyB and cry1; (2) phyA and phyB promote proteasomal degradation of SPA proteins upon light exposure; (3) light-activated phyA, phyB and cry1 reduce interaction between COP1 and SPAs, thereby disrupting the COP1/SPA complex. UVR8 and cry2 are also known to interfere with COP1/SPA activity through direct interaction, but the underlying processes remain unclear. In this preprint, Lau, Podolec et al. show that these two photoreceptors directly interfere with the binding of COP1 to its target proteins.

A so-called VP motif (containing Val and Pro as key residues), first described in the transcription factor ELONGATED HYPOCOTYL 5 (HY5)3, is known to mediate interactions with the COP1 WD40 domain. HY5 is a downstream component in UV-B signalling and is stabilised upon UV-B-induced binding of the UVR8 photoreceptor to COP1.4 Intriguingly, UVR8 contains a VP motif in its C-terminus, a domain essential for UV-B signalling. By employing in vitro binding assays and crystal structure analyses the authors found that both UVR8 and HY5 VP-peptides bind to the same site in the COP1 WD40 domain; the Val and Pro residues establish hydrophobic interactions to the same aromatic residues in COP1 while an upstream Tyr (UVR8) or Arg (HY5) residue form hydrogen bonds and salt bridges to COP1 polar residues (Fig. 1). Mutating these core residues in the COP1 protein abolished or greatly reduced binding to UVR8 and HY5 and, in agreement with this, the respective COP1 mutant variants could not restore UV-B signalling in a cop1 mutant background. 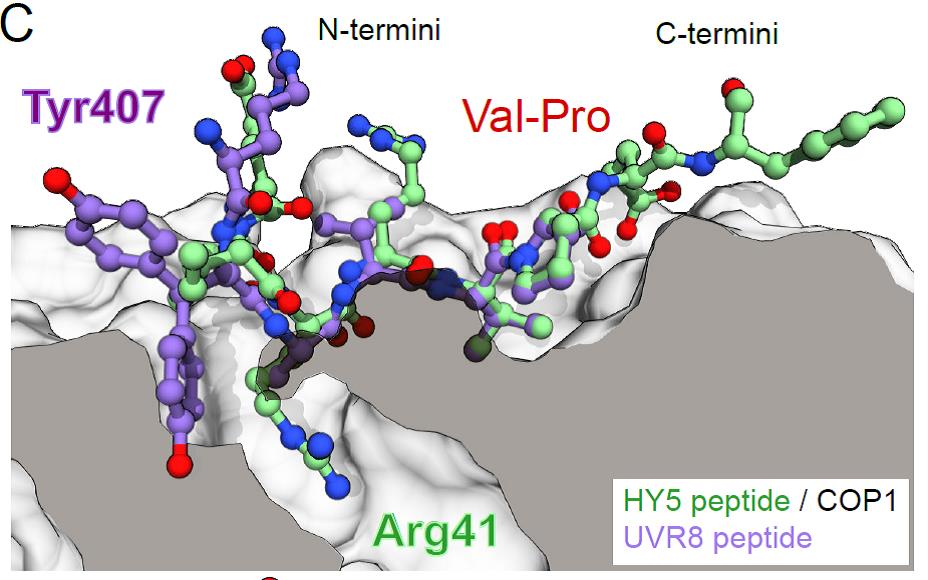 UVR8 forms homodimers, but monomerises upon UV-B irradiation and binds to COP1 to promote UV-B responses4. The fact that UVR8 and HY5 VP-peptides occupy the same binding site in COP1 implies that they may compete for binding, representing a possible mechanism for UVR8 to repress COP1 activity. Binding of the HY5 peptide to COP1 was approximately 8 times stronger compared to the UVR8 peptide in vitro, arguing against effective displacement of HY5 by the photoreceptor. However, performing binding assays with full-length proteins revealed that UV-B irradiation strongly enhances binding of UVR8 to COP1 due to cooperative binding of both its VP region and its beta-propeller core to the COP1 WD40 domain. Binding strength of full-length HY5 to COP1 was in a similar range to that of non-photoactivated UVR8, suggesting that only photoactivated UVR8 can efficiently displace HY5 at the COP1 VP binding site. Yeast-3-hybrid assays further confirmed that COP1 interacts with HY5 in the absence of UV-B, but that UV-B irradiation abolished their interaction when UVR8 is present.

The VP mode of interaction appears to be conserved in other COP1 interaction partners. The authors tested a set of transcription factors such as the floral promoter CONSTANS (CO) as well as the photoreceptors CRY1 and CRY2, all of which harbour a VP motif. Crystal structures revealed that the respective VP peptides all bind to the VP binding site in COP1 in a similar configuration – the Val and Pro residues occupy the centre of the binding site, while chemically diverse residues 2-3 positions upstream help anchor the peptide. The CRY2 and CO interactions are particularly interesting as CRY2 is known to promote flowering under long day conditions by stabilising the CO protein through repression of COP12. Binding of full-length CRY2 to COP1 was strongly enhanced upon photoactivation, suggesting that CRY2 may act in a similar way to UVR8, displacing CO and preventing its degradation.

This preprint represents a great example of how multidisciplinary approaches, exemplified here by crystallographic, biochemical and genetic characterisations, can bring about a leap in understanding of molecular signalling processes. This is especially noteworthy in context of photoreceptors and the COP1/SPA complex, whose relations have been studied for decades, yet are still not fully understood. Lau, Podolec et al. brought us a significant step closer to decipher the mechanisms underlying this relationship.