One protein to bind them all? TTL proteins act as scaffolds to assemble a brassinosteroid signalling hub at the plasma membrane

Brassinosteroids (BRs) are steroidal plant hormones that are involved in plant growth, development and stress responses1. The molecular components of BR signalling have been elucidated over the past 20 years in Arabidopsis thaliana, and a core pathway has been established2: the transcription factors BRASSINAZOLE RESISTANT 1 (BZR1) and BRI1-EMS-SUPPRESSOR 1 (BES1/BZR2) control BR-responsive gene expression. In the absence of BR, the kinase BRASSINOSTEROID INSENSITIVE 2 (BIN2) phosphorylates the two factors, thereby retaining them in the cytoplasm and promoting their degradation, ultimately shutting off BR responses.

With their preprint, the authors add another set of signalling components to the pathway: the TETRATRICOPEPTIDE THIOREDOXIN-LIKE (TTL) proteins. These proteins are known to be involved in stress responses3, but despite some circumstantial evidence, their involvement in BR signalling has not previously been reported.

Key findings: Getting them together – TTLs as a molecular scaffold for BR signalling components

Possible links between TTLs and BR signalling have been reported in the literature: (1) TTL genes are induced by BR treatment; (2) triple ttl1 ttl3 ttl4 mutants exhibit phenotypes similar to those of BR-defective mutants. These findings prompted the authors to investigate an involvement of TTLs in BR signalling. By analysing BR responses in ttl single and a ttl1 ttl3 ttl4 triple mutant they showed that BR-mediated phenotypes such as root growth inhibition and hypocotyl elongation in darkness are perturbed in the absence of TTLs. This was also reflected at the molecular level, with BR-repressed genes displaying higher transcript levels in the ttl triple mutant compared to the wild type, whereas BR-induced dephosphorylation of the transcription factor BES1 was strongly reduced. Thus, ttl mutants are defective in proper BR signalling.

Monitoring a TTL3-GFP fusion protein revealed that BRs affect TTL subcellular localisation. In untreated seedlings, TTL3-GFP localised both to the cytoplasm and the plasma membrane. BR treatment caused its relocalisation from the cytoplasm to the plasma membrane, while treatment with the BR biosynthesis inhibitor brassinazole had the opposite effect.

Employing several different protein-protein interaction techniques Amorim-Silva et al. showed that TTL3 associates with several BR signalling components, among them the phosphorylated (active) form of the receptor BRI1 as well as BSK1, BSU1 and BIN2. Furthermore, TTL3 also interacted with inactive, phosphorylated transcription factors BZR1 and BES1. TTL3’s effect on BZR1 was analysed further: co-expressed TTL3 negatively affected phosphorylation of a BZR1-GFP fusion protein by BIN2, which correlated with increased nuclear abundance of BZR1-GFP. A relatively weak interaction of BZR1 with BSK1 observed by bimolecular fluorescence complementation (BiFC) was enhanced by the presence of TTL3. Based on these results, the authors suggest a scaffold function for TTL3 in BR signalling: in the presence of BR, it interacts with active BRI1 and recruits other BR signalling components to the plasma membrane, thereby facilitating BZR1 activation and promoting BR responses (Fig. 1). 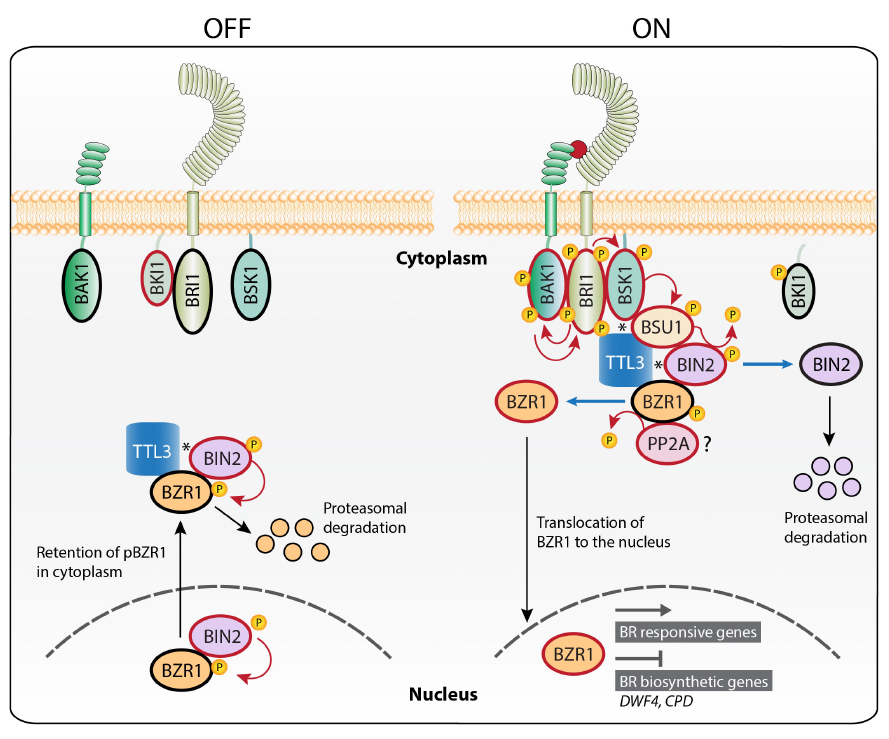 Figure 1: Model of TTL3 function in BR signalling: In the absence of BR (OFF), active BIN2 phosphorylates and thereby inactivates BZR1. In the presence of BRs (ON), BRI1 and BAK1 heterodimerise and transphosphorylate. TTL3 relocalises to the plasma membrane through interaction with phosphorylated BRI1 and in turn helps to recruit other BR signalling components including BSU1, BIN2 and phosphorylated BZR1. This scaffolding promotes inactivation of BIN2 and thus dephosphorylation of BZR1; active BZR1 then dissociates from the complex and translocates into the nucleus to promote BR responses (reproduced from Amorim-Silva et al., Fig. 7).

The phytohormone signalling pathways in Arabidopsis have been extensively studied over the last decades – so we know all the key players and core mechanisms involved, don’t we? Amorim-Silva et al. clearly show us that this assumption is wrong as they put a novel component into the heart of an established signalling pathway. Revealing the mechanism of how TTL3 promotes BR responses also puts the whole BR signalling cascade into a spatial context, with a signalling complex being formed at the plasma membrane – highlighting that control of localisation and local concentration is an important level of regulation.

Future directions: TTL functions within and beyond BR signalling

This article sheds first light on the molecular role of TTLs in the BR response, but there are more questions yet to be addressed:

(1) How redundant are TTL1, TTL3 and TTL4 in their function? Are there specificities for each protein in the BR response? And what about TTL2, which is only expressed in pollen grains?

(2) The role of TTLs as positive regulators of the BR response explains some ttl mutant phenotypes, but can it account for all of them? Are there roles for TTLs beyond BR signalling?

Thanks you so much for your highlight, not only it captures in perfection our work but it´s also beautifully written. In response to the your questions:

We observed that the single ttl1, ttl3 and ttl4 mutants present stress abiotic as well as BR related phenotypes that are exacerbated in the triple ttl1 ttl3 ttl4 mutant. Thus, it is clear that TTL1, TTL3 and TTL4 present some redundancy, but it is also possible that different TTLs could present some degree of specificity in those different responses.

We believe that TTLs could be involved in other pathways besides BR signaling or even coordinating to the cross talk of BR-signaling and abiotic stress responses, and this could contribute to explain some of the phenotypes that were previously described and published for ttl mutants. The molecular mechanism here proposed for TTLs in the BR signaling will help to shed light about how TTLs could operate at molecular level in those other pathways, namely in the molecular function of TTL2 in male sporogenesis.

However, these are questions that we can’t answer just yet but will in the near future, or so we hope, once it’s part of the follow up of this project.