Overview of the research

The mexican cavefish (Astyanax mexicanus) is a freshwater fish living in the rivers and caves bordering the Mexican Gulf. Uniquely, members of this species exist in two very different forms (“eco-morphotypes”) (See Figure 1). The surface morph lives in rivers, is sighted and pigmented. The cave morph lives deep into dark caves, is blind, depigmented, but compensates for the loss of sight by a highly developed olfactory system. Clearly, each form of this species is highly adapted to its environment, but how is their same genetic identity executed into such different body plans during development? What are the developmental differences that turn an Astyanax  embryo into a “surface” fish or a “cave” one? 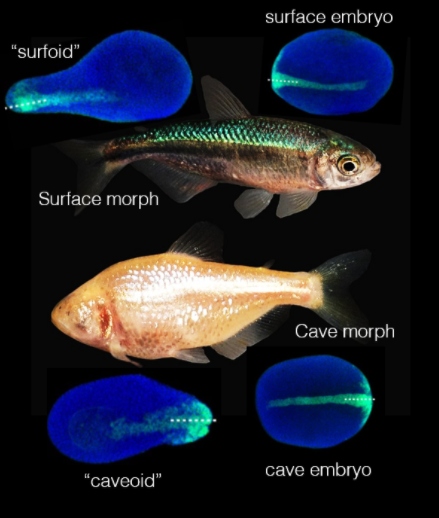 Figure 1: the two Astyanax morphs. Morph picture is from wikimedia commons (public domain). Embryos and pescoids are reused with permission from preprint Fig.2.

Previous work in this species has identified that there are differences in the maternal determinants provided by each mother morph during egg formation, and deposited in the yolk.  (Torres-Paz, et al; 2019, Ma, et al; 2018). Eggs from cave mothers are enriched in ventralising signals compared to surface eggs, suggesting that some of the morphological differences observed come maternally rather than from the embryo itself (maternal genetic effect). How to test the extent of such maternal contributions?

The authors turn to experimental and synthetic embryology, and describe the successful application, to the mexican cavefish, of  two techniques that both probe the intrinsic developmental programmes of surface and cave embryonic cells. Accordingly, the authors describe the procedure to generate cave-surface chimeric embryos: i.e. unique embryos made from cells of both morph types. Secondly, the authors use cavefish embryonic cells to generate gastruloids, a novel in vitro system widely employed to dissect the role of embryonic versus extraembryonic cues (see the preList on the topic).

The authors overcome significant hurdles related to Astyanax reproductive biology, and describe a protocol to generate stage-matched chimeric embryos between the two morphs: that is, to take cells from a surface fish embryo and incorporate them into a cave morph (and vice versa). Preliminary results show that cells from different morphs are able to survive together and to contribute to embryonic tissues based on the time of transplantation (restriction of potential as time progresses). It would be interesting to follow up on whether these cells initiate independent developmental programmes typical of their morph of origin, or if either developmental programme prevails over the other.

By applying a recently described protocol to generate fish gastruloids (“pescoids”, Fulton et al; 2020) the authors generate “surfoids” (pescoids made from surface fish embryonic cells), and “caveoids” (pescoids made from cave fish embryonic cells) (See Figure 2). By showing that cells from Astyanax embryos also aggregate and elongate in vitro  by self organisation, in the absence of yolk, the authors expand on the now growing collection of species whose embryonic cells have been shown to recapitulate features of normal development in vitro (human, mouse, zebrafish). The rationale of this approach is particularly intriguing: if you take Astyanax cells away from the yolk and maternal factors and make them assemble as pescoids, do they still “know” they should execute “surface” and “cave” programmes? For now, the authors do not report any notable difference between the behaviour of the two pescoid morph types, at least with respect to the readout analysed in this report. Incidentally, staining for the marker no tail (ntl, equivalent of the mouse Brachyury) shows that mesoderm tissue internalises, at the site equivalent to the blastopore in an intact embryo. An observation that enriches current knowledge about how pescoids develop. 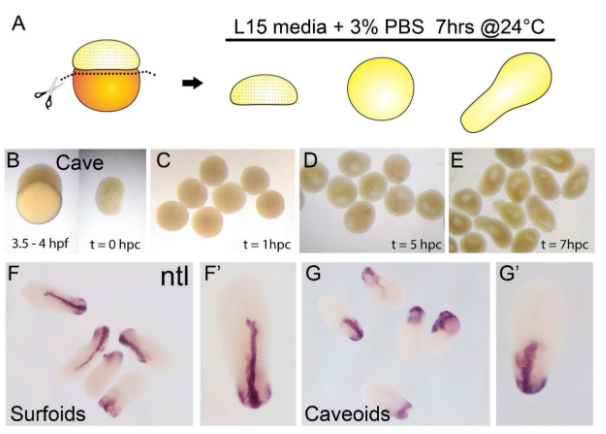 Figure 2: Pescoid generation. Surfoids and Caveoids generated by in vitro culture of Astyanax embryonic cells away from the yolk. Purple: staining for the mesoderm marker no tail (ntl) (reused with permission from preprint Fig.1)

This preprint describes early steps towards the novel application of experimental embryology techniques to a very interesting case study: the mexican cavefish. The recourse to the gastruloid/pescoid approach is extremely interesting, because here is a system where cells with the same genetic identity give rise to embryos with drastically different morphology and adult structures. Gastruloids, where embryonic cells are left to their own means without any other developmental cue, are an excellent system to tease out the relative contribution of embryonic and maternal inputs to development. If features of cave and surface morphology are instructed by maternal cues, one would expect caveoids and surfoids not to be able to develop such features. We are left wondering what will come next from the application of the two techniques described in this paper.

Adult cavefish lack completely their eyes, however as embryos they develop an eye primordium that is small in size and mis-patterned, and that later degenerates by apoptotic mechanisms. A former PhD student in the lab, Lucie Devos, generated transgenic reporter lines for the “eye gene” zic1 (zic1:GFP) in order to visualize and compare eye morphogenesis in the two morphs. By doing live imaging analyses she showed that cell behaviors are impaired in cavefish embryos compared to surface fish (Devos et al., 2019). In addition, our lab has shown that developmental differences between the two morphotypes start at the onset of gastrulation and that maternal information contained in the unfertilized oocytes is responsible for these changes (Torres-Paz et al., 2019).

We decided to implement the recently described method to generate pescoids in Astyanax mexicanus in order to study the influences of extra-embryonic (yolk) and embryonic signals in normal and defective eye development. To our knowledge, eye development has not yet been proven to occur in gastruloid systems. We will take advantage of the available transgenic lines as direct readout to study if early steps of eye development could be recapitulated in gastruloids. Combining gastruloid methods and eye-specific reporter lines will help us to uncover early developmental mechanisms leading to eye developmental defects. Note that we can also envisage producing mixed gastruloids, i.e., combining blastoderms from a cavefish and a surface fish embryo.

Regarding the experiments on chimeric embryos in the Astyanax model, we hope to reveal autonomous and non-autonomous mechanisms involved, first in the incorrect specification of the presumptive eye, and then in the degenerative process. We bet that the embryonic environment will have a strong influence in cell fate decisions made by the grafted cells and we aim to identify the signals involved and the timing during which these cell decisions are made.

Morphological changes in anterior brain structures observed in Astyanax morphs, including the eye loss and enlargement of olfactory organs, take their origin during gastrulation or earlier. We and others have demonstrated that changes in mature forebrain structures can be predicted precociously in embryos at the neural plate stages by looking at the expression of key regionalization markers. We think that even though development of structures such as the eyes, telencephalon or the olfactory organs do not occur in gastruloids, maybe due to failure in morphogenesis, some of the earlier developmental aspects, such as initial tissue specification could be advantageously studied. If this is true, Astyanax gastruloids will help us characterizing the signaling systems (and early embryonic structures) that are involved in neural plate regionalization.

Zebrafish embryogenesis occurs by meroblastic discoidal early cleavages, were embryonic cells divide on top of a large extraembryonic yolk cell. Pescoids were developed in zebrafish by removing the yolk cell and culturing the embryonic cells under appropriate conditions.

Divergence between Astyanax (characid) and zebrafish (cyprinid) is estimated to have occurred around 150mya, and both species share a very similar pattern of early development, with meroblastic discoidal early cleavages. This developmental pattern is also observed in most teleost fish such as the medaka, which have diverged from the clade containing both Astyanax and zebrafish (ostariophysi) around 250 mya. We guess that pescoids could be obtained also from medaka and other teleost embryos.

In contrast, earlier-derived, non-teleost ray-finned fishes such as sturgeons, gars and bowfins develop through holoblastic cleavages, similarly to amphibians, where the early blastomeres are completely divided during early cell cycles. Thus, as there is no yolk cell in this type of embryos, pescoids in the proper sense cannot be obtained.

In natural conditions Astyanax cavefish live in total and permanent darkness, while the river-dwelling surface fish live in a “normal” circadian rhythm. In our lab as in most cavefish labs around the world, both morphs are maintained at a 12:12 light-dark cycle, in order to keep them under the same experimental conditions- except for specific experimental designs and questions. Also, it is technically very complicated to keep fish under cave-like conditions throughout their life cycle. We have not studied the effect of the absence of light on early morphogenesis, but we believe there would be no effect. In fact, work from the lab has shown that raising fish in the absence of light does not have any impact in general morphology compared to fish raised in normal light-dark cycle – even though some behavioral plasticity has been observed in larvae, particularly an enhancement in olfactory responses in surface fish raised in the dark (Blin et al., 2018).