Keep Left! A requirement for cilia to establish and maintain the midline barrier during left-right symmetry breaking.

The breakage of left-right symmetry during development is a process that has both fascinated and frustrated developmental biologists for decades. During early development, cells in an initially symmetrical embryo must acquire positional identities along the left/right (L-R) axis to ensure that organs later develop in the correct position, and then if required, go on to develop asymmetrically themselves.

In vertebrates, the initial breakage in symmetry is thought to originate from the beating of polarised cilia, which produce a leftward flow of extraembryonic fluid within the left-right organiser region (the node in mammals). Another type of cilia sense this flow, and activate the left-determinant gene Nodal in the left lateral plate mesoderm (LPM) only. Importantly, expression of the Nodal inhibitor Lefty1 forms a barrier along the midline to prevent activation of Nodal on the right-hand side. Nodal then propagates an asymmetric signalling cascade to correctly pattern the developing embryo along the L-R axis[1]. 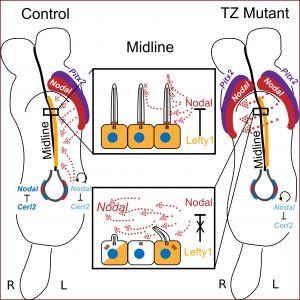 Graphical abstract, kindly provided by the Weatherbee lab: In a wild-type embryo, Nodal and Pitx2 are restricted to the left-hand side due to the midline barrier, which is established and maintained by midline cilia and Lefty1-mediated Nodal inhibition.  However, in transition zone (TZ) mutants, midline cilia are greatly reduced in number and Lefty1 expression is not sufficient to inhibit Nodal. Consequently, Nodal diffuses across the midline barrier and the its signalling cascade is activated on both sides. Ultimately, this leads to numerous laterality defects later in development.

Many questions how the Nodal signalling cascade is initiated, maintained and transduced remain to be answered. Even the exact roles and importance of cilia to the initial breakage of L-R patterning are somewhat controversial, as the iv mouse mutant for example has immotile cilia, but 25% of embryos develop normally[1].  Discrepancies like these between theories that explain phenotypes of some mutants very well, but not of others, suggest that there is still much to understand about the establishment and maintenance of L-R asymmetry.

In this preprint, Shylo and colleagues investigated L-R patterning in three different mouse ciliary mutants. At first, their phenotypes seemed contradictory to each other, and also differed from current models. After investigating these inconsistencies further, the authors unexpectedly discovered a novel requirement for midline cilia to establish and maintain the midline barrier, independent of Lefty1 expression.

From Figure 8 – used with permission from the authors.  Midline cilia are absent in transition zone ciliary mutants that later develop laterality defects: Confocal Z-stacks show the node and/or midlines of Tmem107schlei, Tmem107null and Mks1krc embryos, after immunostaining with an antibody against the cilia marker ARL13B.  Cilia are almost absent in Tmemnull and Mks1krc midlines, but can be observed in  Tmem107schlei midlines and wild-type controls.

The subject of how cells acquire and process positional information has always been fascinating to me, and the heated debates about cilia and L-R asymmetry were used as literature review exercises multiple times during my university days. Although this paper does not go into the function of the midline cilia, it provides another piece of the L-R asymmetry puzzle, which might eventually show us how L-R patterning is defined, maintained, and then propagated in later development.

As a general reason, I think there is a temptation to put experimental findings to one side when they contradict current theories, or to cherry pick data until they fit, instead of exploring confusing results further. In this preprint, Shylo and colleagues show a series of simple yet directed experiments to investigate unexpected results, which lead them to discover something novel which will hopefully be very interesting for follow-up research.