Systematic reconstruction of the cellular trajectories of mammalian embryogenesis

An scRNA-seq #subwaymap of cellular trajectories in early mouse development, presented in this new, exciting preprint by @CXchengxiangQIU et al.! 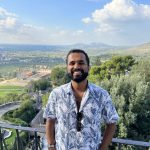 A fundamental goal of developmental biology is understanding the relationships between cell types during embryogenesis and the molecular programs that underlie their emergence. Single-cell RNA-seq data generated during implantation (Cheng et al. 2019; Mohammed et al. 2017), gastrulation (Pijuan-Sala et al. 2019) and organogenesis (Cao et al. 2019) allows us to span mouse embryo development from dozens (E3.5) to millions (E13.5) of cells. However, integrating these datasets has been challenging due to unwanted variation in the data originating from laboratory, protocol and batch-specific differences.

To correct for this non-biological variation between datasets, the authors leveraged an anchor-based batch correction strategy proposed by Stuart et al. (2019). Briefly, this approach defines data from one timepoint as the “query” dataset and data from an adjacent timepoint as the “reference” dataset. Nearest neighbour cell pairings were identified between the two datasets (called anchors) and the expression profiles of cells in the query dataset were “corrected” along these anchors to integrate them with cells in the reference dataset.

Next, to connect cell states between timepoints, a k-nearest neighbour (k-NN) based heuristic was used. For a given cell state at a timepoint, the 5 closest cells from the antecedent timepoint were identified. After bootstrapping with down-sampling, the median proportion of such neighbours derived from each potential antecedent cell state was calculated. This process was performed in a pairwise manner for all 18 adjacent pairings (19 timepoints) to connect cell states between adjacent developmental stages.

The result of this integration of cell states from different timepoints can be represented as a directed, acyclic graph (Figure 1c) where each node represents a cell state (annotated cluster) and the edge weight represents the proportion of the cell state that is likely to originate from the potential antecedent cell state (also known as pseudo-ancestor). The trajectories of mammalian embryogenesis (TOME) thus obtained are largely consistent with our contemporary understanding of mammalian development. This graph was interrogated to study the maintenance of cellular phylogenies and to identify the transcription factors (TFs) and cis-regulatory motifs involved in in vivo cell type specification.

This integration strategy was then extended to perform a cross-species comparison of mouse, zebrafish and frog embryogenesis. To facilitate its exploration, the authors created an interactive website on which the nodes and edges shown in Figure 1c can be navigated (https://chengxiangqiu.github.io/tome/). 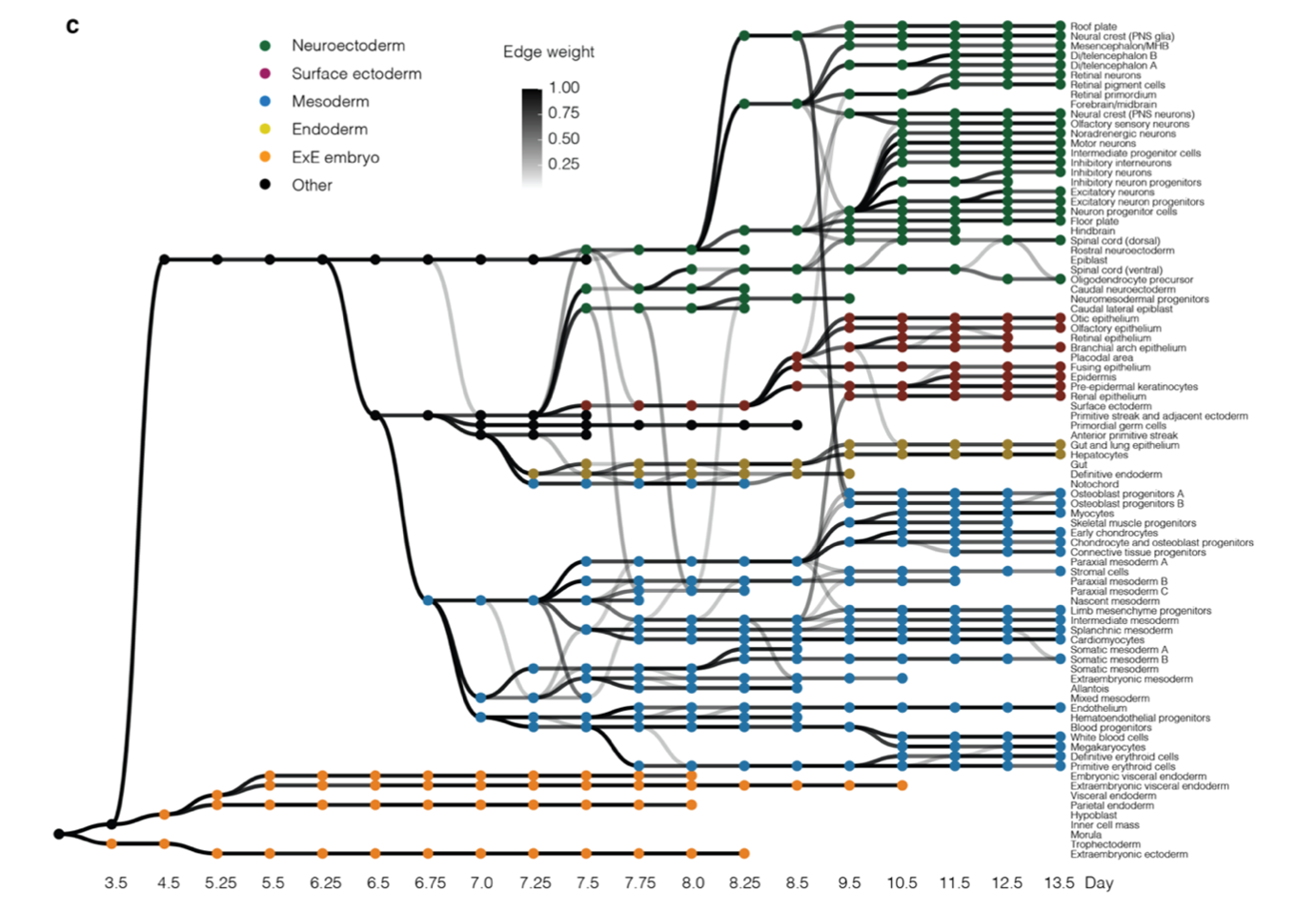 TOME molecular trajectories can recapitulate cellular phylogenies, with some caveats. The TOME graph (Figure 1c) has the following properties:

Systematic nomination of key transcription factors for cell type specification. Key TF candidates for specifying each newly emerging cell type were heuristically defined as those that were significantly and specifically upregulated in the newly generated cell type with respect to the pseudo-ancestor. For each such candidate, a normalized fold-change-based score was computed. Figure 4d demonstrates selected cellular trajectories from TOME, decorated with the top 5 scoring candidate key TFs for each edge.

Identification of cis-regulatory motifs involved in in vivo cell type specification. The aforementioned TF selection approach was extended to identify all developmentally regulated genes. Using HOMER (Heinz et al. 2010), the authors discovered DNA sequence motifs that are specifically enriched in the core promoters of these key genes (-300 to +50 bp of TSS). At an FDR of 10%, 77 de novo and 100 previously documented promoter motifs were implicated in 41 and 30 mouse cell types respectively. Of these, 20 sequence motifs corresponded to binding sites of candidate key TFs for the same cell types, with 15 having consistent directionality between TF expression and target gene expression.

Systematic comparison of the cellular trajectories of mouse, zebrafish and frog embryogenesis. TOME was extended beyond the mammalian domain to facilitate systematic alignment of cell types across vertebrates. In zebrafish (D. rerio), data from 2 studies were integrated, together including 15 developmental stages (hpf3.3 – hpf 24). For frog (X. tropicalis), one dataset of 10 developmental stages (S8-S22) was analysed.

The authors used 3 strategies to systematically align cell types from each species to their cell type homologs in the other 2 species, which are detailed below:

TOME is the result of an elegant and systematic approach for constructing developmental trajectories, which provides us with a realistic strategy to fantasize about a complete integrated mammalian developmental roadmap in the future. While there are some caveats to the approach taken by the authors, this study is a considerable attempt to consolidate the numerous developmental scRNA-seq datasets in the field and provides readers with unique perspectives on integrating and analysing scRNA-seq data. In particular, the strategies described for cross-species comparisons can be transferred to study other evolutionarily conserved mechanisms. Thus, I believe this preprint is a valuable contribution to the field and will only increase in significance as more single-cell datasets continue to be generated.

Could TOME be used to study progressive changes in ligand-receptor communication across timepoints?

Thanks for the question. I think it may be possible. For example, we could trace the changes of ligand-receptor co-expression for individual cell states across timepoints along the trajectory, based on a simple linear regression model. Alternatively, we could extend the pairs of gene co-expression to a gene regulation network underlying each cell state, to identify topological changes across timepoints. Yet another alternative would be to leverage existing packages (e.g. CellPhoneDB (Efremova et al. Nature protocol (2020))) to infer ligand-receptor associations by looking at the correlation of ligands and receptor subunits based on the transcriptional profiles of individual cells/cell states in TOME.

When performing anchor-based batch-correction (Stuart et al. 2019), is it possible that a pseudo-ancestor in a previous timepoint gets corrected to have a similar transcriptional profile as a new cell type in a later timepoint? If so, was this observed while constructing TOME, and how can this problem be recognized and resolved?

Thanks for the question. We have tried to avoid such artifacts in our analysis. First, we referred to the original annotation of the cells from their initial datasets, and further investigated the expression of the distinct marker genes to further confirm the accuracy of the cell-type annotations (Supplementary Table 2). Second, we carefully checked the embedding of each single timepoint and co-embedding of each pair of adjacent timepoints, to make sure the cell states were clearly separated. Finally, the RNA-velocity results were also helpful to distinguish the pseudo-ancestors and their derivatives.