Why do animals with large eyes have small noses and vice versa? By investigating this trade-off mechanism in detail in flies, the Hassan Lab traces it to a single nucleotide polymorphism. 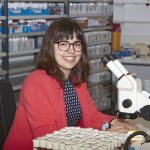 Across different species, eyes and olfactory organs (such as nose in mammals or antennae in flies) share the same developmental origin. In the fly, their origin is the eye-antennal imaginal disc (EAD). During development, eye and antennal related transcription factors are firstly co-expressed in the EAD, then progressively become restricted in space to form the eye and antennae subdivisions of the EAD before finally mutually repressing each other – a succession of events shared by other organisms. However, a trade-off between vision and olfaction has been observed in different organisms, in the form of phenotypical differences in ratios of eye to olfactory organs. There are cues suggesting that animals make use of this to adapt to the environment, but the mechanisms behind the molecular mechanism of sensory trade-off are still not fully clear. The authors of this preprint explored this question using Drosophila, which exhibits natural variation of eye sizes between and within species.

The authors were able to pinpoint the origin of differential proportions of sensory organs both between and within Drosophila species. For this, they focus on eye-size variation, as a marker of vision/olfaction trade-off. They show that this variation originates in development, by differences in the proportion between eye and non-eye multipotent cells in the EAD. This differential proportion is controlled by temporal differences in the regulation of Eyeless (one of the four orthologues of Pax6 in Drosophila): when the segregation into two fields – Eyeless positive and negative – occurs earlier, this leads to increased eye size since Eyeless positive cells proliferate more. The authors traced back this temporally differential regulation between Drosophila species to ortholog enhancers of this gene. When the expression driven by these enhancers retracts from homogenous expression (of eye-antennae factors in the EAD) to the respective subdividing compartment at different velocities, the field segregation occurs at different times.

This logic is conserved within species. The authors show that the temporal differences observed in two Drosophila melanogaster strains are due to a single nucleotide polymorphism in the enhancer studied: the substitution of a Guanine to an Adenine, which is found in most natural populations of Drosophila melanogaster, with the exception of populations from Sub-Saharan Africa, which are mostly fixed for the Guanine-allele. This SNP is found at a sequence similar to the binding motif of an antennae-related transcription factor (Ct). The authors show causality between impairment of Ct activity (by RNAi knockdown) during EAD development and increased eye size. Experiments with synthetic eyeless enhancers suggest that, when the nucleotide substitution occurs, Ct binds with lower affinity to this enhancer, leading to decreased repression, and ultimately to different timing of EAD-field segregation and increased eye size. The authors finally determined that the eyeless cis regulatory SNP is indeed the cause to eye-size variation by CRISPR/Cas9 genome editing.

In addition, the authors tested the functional readout of facet number into visual acuity between Drosophila strains and saw that increased facet number leads to increased visual acuity, aiding the suggestion of eye-size regulation as an evolutionary mechanism for environment adaptation.

I chose this preprint because I am particularly interested in transcriptional regulation throughout development. I really liked the completeness of this study. The uncovering of mechanisms into the tiniest detail fascinates me, and I feel that this study is very close to that. In addition, since my work is related with transcription factor binding, thus including binding affinities, I am amazed to see yet another study shedding light into the importance and consequences that differential binding affinity might have. In this case, in the “micro-scale”, a SNP causing a site to have lower affinity to a repressor, ultimately has such “macro-scale” phenotypical and functional effect. Finally, I also find it always interesting to learn about behavioural measurements, which I never performed (if you are also curious, check the methods for measurement of visual acuity!).

I would be interested to know how important the authors think it would be to confirm if these mechanisms are conserved in vertebrates, and to see if there is a general pattern across animals for the biochemistry and molecular biology behind sensory trade-offs. In addition, in the shorter-term, would it be relevant to look into the regulation of the antennal structures? In this study, the trait measured was always eye-size. Would it possible to distinguish which is the evolutionary target of the adaptation – if vision, olfaction, or both?