A recent preprint highlights an advance in CRISPR/Cas9 technology that would enable the independent regulation of different target genes in the same cell.

Utilising ligands to activate or deactivate sgRNAs provides a new way to regulate CRISPR-Cas9 activity in a dose-dependent manner, enabling manipulations to be carried out on different targets within the same cell.

The CRISPR/Cas9 system almost needs no introduction – its ease of use has made it the most attractive system for genetic engineering today. The Cas9 nuclease is targeted to specific sites in the genome by the introduction of single guide RNAs (sgRNAs) complementary to the site of interest, enabling precise DNA cleavage that can be utilised to generate gene knockouts or knock-ins. Alternatively, the inactivation of both Cas9 nuclease domains and coupling to an enzymatic domain, such as to an activation domain or epigenetic modifier, enables the specific targeting of enzymatic activities to exact genomic coordinates. Similarly, the inactivated Cas9 protein (dCas9) is able to sterically repress transcription.  Previous adaptations made to control CRISPR/Cas9 activity largely target Cas9 activity using chemical or optical inputs, which modulates all gene targets in the same direction. It is also possible to use multiple orthogonal CRISPR-Cas9 systems to modulate different targets in different directions. A key limitation of the CRISPR/Cas technology is the potential for off-target effects, which may introduce unwanted effects and limits the use of CRISPR-Cas9 in therapeutics.

The authors demonstrate the use of ligands to activate or deactivate sgRNA, and thus CRISPR/Cas9. This was carried out by the addition of ligand-binding aptamers to the sgRNAs utilised. By choosing to target sgRNAs, which vary between different targets, different manipulations can be carried out on different targets within the same cell.

Here, the authors chose to use the well-characterised small molecule, theophylline, and its corresponding aptamer, to establish the system. They tested three different strategies to link the aptamer to sgRNA, and eventually found that strand displacement, using sequences that enable alternative base pairing in the ligand-bound and ligand-free states, was most successful strategy. Multiple designs were responsive to theophylline in vitro, and these included designs that were activated or deactivated by the addition of theophylline. Utilising CRISPR-Cas9-mediated repression of fluorescent protein expression, they showed that the ligand-activated and inactivated sgRNAs had up to 11x and 13x dynamic ranges respectively, spanning over 50% of the range achieved by the controls. These sgRNAs also responded to changing concentrations of theophylline in a dose-dependent manner, suggesting that these sgRNAs could be used to precisely modulate gene expression.

The authors even utilised a second, related ligand-aptamer pair. The 3-methylxanthine (3mx) aptamer differs from that of theophylline by a single base-pair, and even as the theophylline aptamer is recognised by both ligands, the 3-methylxanthine aptamer only responds to its ligand, 3mx. They were then able to establish a system with two different fluorescent proteins under the control of different ligand-aptamer pairs, and demonstrated that fluorescent protein expression can be logically and temporally regulated by sequential addition and removal of the two ligands. 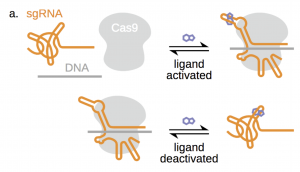 Figure 1a from the preprint: Principles of the technology. Small molecule aptamers are inserted into sgRNAs, resulting in the stabilisation of functional CRISPR-Cas9-sgRNA complexes either in the presence (above) or absence (below) of the ligand.

I find the principles of this modification of CRISPR/Cas9 technology extremely elegant. By regulating individual sgRNAs, target genes can be independently modulated. The fact that they found both ligand activated and deactivated sgRNAs suggests that different genes can be regulated in opposite directions with a single ligand.

The authors have established this system in bacteria cells, and it would be interesting to see if similar systems could be adapted for use in mammalian cells. The authors attempted this in both yeast and mammalian systems, and it did not appear to convincingly work in either. In addition, higher concentrations of theophylline was toxic to mammalian cells. It appears that alternative ligand-aptamer systems might be required to transfer this technology into eukaryotic cells.