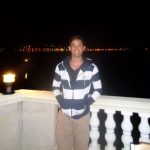 Membrane proteins (MPs) comprise 15-25% of the human proteome, yet collectively sum to less than 1% of the deposited three-dimensional structures in the Protein DataBank (PDB). Such a paucity of structural information manifests from difficulties that can accompany the biochemical preparation of purified MPs, ranging from complications with faithful abstraction from the native membrane to misfolding after extraction from insoluble inclusion bodies. Moreover, despite the common view of MPs existing in one of two end states (i.e. “open” or “closed” transporters, “active” or “inactive” G-protein coupled receptors), MPs can populate a wide range of conformations that dynamically exchange on various timescales, spanning pico-nanoseconds, micro-milliseconds, or far longer than hours. Such dynamics can often hinder crystallization attempts for structural analysis by X-ray crystallography. Despite the current lack of structural knowledge pertaining to MPs, many FDA-approved drugs target them. Thus, a holistic understanding of membrane protein structures, dynamics, and interactions in native membrane environments, or reliable membrane mimetics, proves critical.

A significant factor in structural studies of MPs is the membrane environment. As pointed out in a recent review1, nearly 80% of MP structures determined to date have used detergents, which form small micelles that present a very different environment to lipids. However, recent work has revealed that many MPs embedded in such micelles, for instance of the commonly used detergent dodecyl phosphocholine (DPC, also known as Foscholine-12), are no longer functional or folded correctly1.

Thus, when choosing a membrane mimetic system, how does one ensure that a reconstituted MP is functionally relevant? The most rigorous demonstration is an assay that directly monitors biochemical activity: for example, the transport of a substrate or other reporter molecule. In the absence of such an assay, researchers typically default to the demonstration of the MP binding to a relevant ligand, generally by measuring a dissociation constant (Kd) and comparing this to values obtained by other groups who have used native membranes. In the preprints discussed below, two reproduction studies are conducted pointing out significant flaws in this practice, and show that the presumed functionality of MPs should be interpreted with caution when using detergents.

Two recent preprints conducted reproducibility studies on the structural and functional integrity of an AAC transporter (AAC3) in DPC2,3. AAC3 functions to exchange ADP for ATP across the inner mitochondrial membrane, an essential process for the cell. This membrane protein had previously been crystallized in the presence of a strong inhibitor (CATR) and was shown to adopt a locked conformation, termed the “c-state”4,5. As part of its transport mechanism, AAC3 populates a second conformation known as the “m-state”, yet structural evidence for this state has remained elusive.

In 2015, a paper by Chou and colleagues6 in Nature Structural & Molecular Biology reported using NMR spectroscopy that, in DPC, the yeast version of AAC3 (yAAC3) could be captured in a dynamic equilibrium involving two states: the c-state and a transiently populated conformation, which was inferred to be the m-state (or similar). Critically, their results hinged on yAAC3 remaining correctly folded and fully functional while embedded in the detergent. The integrity and correct folding of the yAAC3 sample was determined by binding of the inhibitor (CATR) and substrate (ADP) as measured by isothermal titration calorimetry (ITC) or NMR6.

Preprints from Schanda and colleagues2 at the Institut de Biologie Structurale in Grenoble (France) and Kunji and coworkers3 at the Mitochondrial Biology Unit in Cambridge (UK) challenged the notion that yAAC3 is correctly folded and functional in DPC. Rather, the authors convincingly demonstrate that yAAC3 is misfolded and not functional in the presence of DPC.

First, both King et al.3 and Kurauskas et al.2 noted that the Kd values for CATR binding to yAAC3 reported by Chou and colleagues were nearly three-to-four orders of magnitude larger than the commonly accepted literature values (5–300 nM). Second, Schanda and colleagues examined the raw data used to determine that the substrate (ADP) binds specifically, and found residues all over yAAC3, including those more than 20 Å distant from the ADP binding site, were impacted by ADP binding2. While this could reflect allosteric structural changes, a recent publication noted that AAC3 embedded in DPC bound identically to ATP and GTP, despite preference for the former in the native membrane5. Such a loss of specificity implies an incorrect tertiary structure. Finally, King et al.3 measured melting temperatures of yAAC3 in DPC and other detergent systems (Figure 1A). In the native mitochondrial membrane, yAAC3 unfolded near 40°C; however, the same experiment performed in DPC revealed a large fraction of unfolded protein already present at ambient temperature, which exhibited no unfolding cooperativity3. Similar results were obtained by NMR3. Taken together, these data suggest that yAAC3 solubilized in DPC is incorrectly folded and binds to CATR and ADP non-specifically2,3. King et al. note that a non-specific interaction could be electrostatic in nature, as yAAC3 has an isoelectric point of 9.82, and therefore contains excess positive charge, whereas ADP and CATR are both negatively charged at neutral pH3.

Having established that ADP and CATR binding in fact reflects non-specific interactions, Schanda and colleagues2 re-examined the previously published NMR data used to measure conformational exchange in yAAC3 between the c-state and putative m-state (Figure 1B). The experiment used for such analysis is called Carr-Purcell-Meiboom-Gill relaxtion dispersion (CPMG RD, reviewed here), and involves the measurement of an NMR parameter (transverse relaxation rate, termed the effective R2) as a function of the number of radiofrequency pulses applied during a fixed delay. In the presence of conformational exchange between two or more states on the micro-to-millisecond timescale, CPMG RD experiments will reveal a dependence of R2 on the number of applied radiofrequency pulses (Figure 1B). Subsequently fitting these data to the appropriate equations yields the rate of conformational exchange, the relative populations, and (qualitative) residue-specific information about structural differences between the two forms. For example, such experiments have been deployed to determine accurate solution structures of otherwise invisible protein folding intermediates that exchange with a folded conformation on the millisecond timescale7. 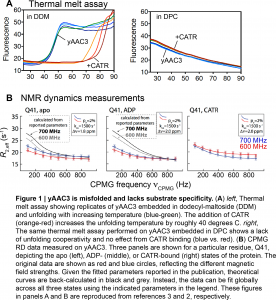 In the original paper, Chou and colleagues6 found via CPMG RD that the rate of conformational exchange varied by roughly 20-fold between the inhibitor- and substrate-bound forms of yAAC3, and reported large structural differences between the two states (for NMR spectroscopists, 15N |delta omega| > 5 ppm). However, Kurauskas et al. re-fit the raw CPMG RD data in free state and the inhibitor- and substrate-bound forms of yAAC3 (Figure 1B), finding that no difference existed in the rate of conformational exchange (1500 s-1 for all forms), with significantly smaller structural differences than initially reported (15N |delta omega| values around 2 ppm). Finally, similar millisecond exchange dynamics that were independent of added substrate/inhibitor were obtained when analyzing conformational exchange in mutants of AAC3 that are incapable of ADP/ATP exchange, indicating that there is no link between dynamics and transport8.

In conclusion, these two new preprints from the Schanda and Kunji groups demonstrate that the yAAC3 membrane protein is not functional and misfolded when embedded in DPC. These studies highlight the difficulty and importance of choosing the right membrane mimetic (when not using native membranes). In addition, these works provide a platform for diagnosing future issues that arise from misfolded MPs (e.g. non-specific ligand binding, lower Kd than expected, pervasive millisecond motions), in particular those analyzed by NMR spectroscopy.

These two new preprints highlight the importance of independent replication studies that seek to verify, challenge, or question biological implications obtained from biophysical experiments. While a few examples exist in the published literature, there are certainly not enough of such studies. Encouragingly, a replication preprint was recently highlighted on preLights. The bioRxiv will help to remove the stigma associated with publishing replication studies, and will provide a convenient platform for the publication of replication studies in lieu of publication in traditional journals. Likewise, PLOS Biology has instituted an initiative to publish papers from groups who have recently been “scooped”, which should also increase the number of papers that report data on the same system.

While the two preprints discussed here present negative results, their findings will together advance the field of AAC structural biology, and hopefully will deter future researchers from using DPC as a reconstitution system. More generally, the preprints from the Schanda and Kunji groups highlight the importance of selecting the appropriate membrane mimetic system and then verifying that the embedded MP retains functional and structural integrity.

As a practicing NMR spectroscopist who enjoys dynamical measurements, the experiment that I most enjoyed was actually a data analysis method to obtain insight into micro-to-millisecond motions. Schanda and colleagues noted that the CPMG RD data from Chou and coworkers could be described by a single set of parameters for all three conditions (apo-AAC3, CATR-bound AAC3, ADP-bound AAC3), and showed that these data could indeed be fitted globally. This means that the AAC3 exchange process on the micro-to-millisecond timescale, which is probed in the NMR experiment, is insensitive to added substrate or inhibitor, and is therefore not a transport filter.

1. Why did you pursue a replication study?

2. Why did you two and your research groups decide to work on the same system and address the same 2015 NSMB publication?

3. What type of assays or controls should the membrane protein field perform in order to ensure the membrane protein of interest retains structural and functional integrity?
(Note:  the following two questions were addressed to PS only)
4. NMR is inherently a low sensitivity method that requires extensive sample optimization to yield high quality spectra. How should membrane protein NMR spectroscopists balance the quality of their NMR spectra and integrity of the membrane protein? There could (and likely will be) situations where membrane mimetic systems that yield correctly folded and fully functional membrane proteins will not provide workable NMR spectra.
5. You have stressed in various articles and platforms that NMR, in principle, can solve accurate structures of membrane proteins. The difficulties lie in the interpretation of the NMR data (which yield resonance frequencies and not precise atomic coordinates). There have been many arguments in the field over the stoichiometry, architecture, and dynamics of membrane proteins studied by NMR. How can the field begin to reconcile these differences? Do you think that a community-wide effort like CASP (Critical Assessment of protein Structure Prediction) would help outline standard protocols, critical controls, or improve structure determination of membrane proteins by NMR?