Between one half to two thirds of the human genome consists of repetitive sequences, most of which are inactivated transposable elements (TEs). These sequences of viral origin integrated into our genomes along evolution. The enormous proportion of TEs suggests that they have played an important role in shaping our genome [1]. Given that the ENCODE Project estimates that at least 80% of the entire genome has functional annotations –such as active transcription, histone marks or transcription factor (TF) binding [2]– just by doing the math one could think that such DNA ‘fossils’ likely contain some functionality.

TEs can act as cis-regulatory modules controlling gene expression although they are epigenetically silenced during early development [3]. Several studies have shown deregulation of TEs, including endogenous retroviruses (ERVs), in different types of cancer. In this preprint, Deniz and collaborators explore the pathogenic role of TEs in acute myeloid leukemia (AML). 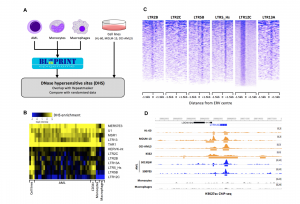 Figure 1. Activation of ERVs with regulatory potential in AML. A) Obtention of DNase-seq data for differentiated cells (monocytes and macrophages), hematopoietic stem cells and AML (both from primary samples and cell lines). B) Heatmap showing that chromatin is specifically open at several families of ERV. C) DNase-seq profiles in AML per family of ERV. D) Example of an ERV element behaving as an AML-specific enhancer. This figure has been modified from Figures 1 and 2 from the original preprint.

– AML cells activate several families of ERVs. AML cells coming from both primary samples and established cell lines shared enrichment of open chromatin and enhancer signatures as well as binding of leukemia-related TFs in six families of ERVs (Fig. 1). This is in stark contrast to what happens in differentiated blood cells, such as macrophages and monocytes which do not activate these families (Fig. 1B).

– Broad epigenomic silencing of ERVs reduced cell proliferation. The authors leveraged the repetitive nature of these TEs to target more than 200 of these sites by CRISPR interference (CRISPRi), a sequence-specific tool for gene silencing. Epigenomic editing altered the epigenomic landscape of targets and reduced proliferation in leukemia cells. The downregulated genes APOC1 or APOE seemed to impair cell growth thus contributing to ameliorate the malignant phenotype (Fig. 2C, D and E). 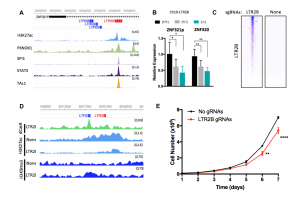 Figure 2. Perturbation of enhancers at ERVs regulates gene expression and affects proliferation. A) LTR5B element at an intron of ZNF321P shows open chromatin and TF binding. B) Deletion of the ERV in A downregulate target genes ZNF321P and ZNF320. C) dCas9-KRAB binds to hundreds of LTR2B elements targeting epigenomic silencing (CRISPRi). D) CRISPRi effectively edit the epigenomic landscape at target sites. E) Downregulation of target genes mediated by CRISPRi leads to impaired proliferation. This figure has been modified from Figures 4 and 5 from the original preprint.

Considering the epigenomic status of cells and tissues as an accurate footprint of their identity and behaviour could be “too simple, sometimes naïve”. However, there is increasing evidence of diseases and disorders with common chromatin-related features such as enhancer rewiring or changes in global DNA methylation or post-translational modifications of histones. Since we are still not able to understand most of the information that global genetic and epigenetic analysis from patients provide it is very important to find disease hallmarks in order to benefit diagnosis and treatment strategies.

This work links two very interesting questions: ‘what is the epigenetic footprint of leukemia cells?’ and ‘what does a huge and repetitive part of the genome have to do with that?’. I like this preprint because the authors provide a combined answer to these questions and turn a potential genetic limitation such as working with very similar sequences into an interesting approach to study global effects of epigenetic silencing.

Question to the authors

– The broad CRISPRi-mediated repression performed in LTR2B elements led to epigenetic changes at target loci and downregulation of several genes. However, the ERV element located between the genes APOC1 and APOE seems to be the responsible for the proliferative phenotype. Do the authors think that the rest of the elements targeted through this approach (especially those downregulating their target genes) also contribute to clonal advantages in AML? And, if so, how?

– How do the authors show that downregulation of APOC1 gene and not that of APOE is responsible for the proliferative phenotype? Is any of those gene consistently upregulated in most AML samples?

– Have the authors assess the effect in proliferation of other genes downregulated, such as ZNF320, in the CRISPRi experiment?

– The broad CRISPRi-mediated repression performed in LTR2B elements led to epigenetic changes at target loci and downregulation of several genes. However, the ERV element located between the genes APOC1 and APOE seems to be the responsible for the proliferative phenotype. Do the authors think that the rest of the elements targeted through this approach (especially those downregulating their target genes) also contribute to clonal advantages in AML? And, if so, how?

APOC1 was the only gene that was significantly downregulated in both cell lines we tested, OCI-AML3 and K562. However, it is possible that other LTR2/LTR2B elements targeted by our CRISPRi experiments may also regulate other genes responsible for cell division and cellular differentiation, and thus contribute to clonal advantages in leukaemia. For example, the FLOT2 gene was found downregulated in K562 cells and this gene has been shown to play a role in the development and progression of myeloid leukaemia. It is possible that the epigenetic silencing of its associated LTR2B element may also contribute to the proliferative phenotype we observed. Genetic deletion of other candidate elements would have to be performed to validate such loci.

– How do the authors show that downregulation of APOC1 gene and not that of APOE is responsible for the proliferative phenotype? Is any of those gene consistently upregulated in most AML samples?

Our experiments were focused on testing the phenotypic impact of the LTR2 element at that locus. We proposed that this element could be affecting proliferation by altering APOC1 expression, as the knockdown of APOC1 had been shown to impair cellular growth in leukaemia cells. However, we cannot exclude that APOE downregulation may also play a role, and further insights would require rescue experiments.

We also showed that only a small proportion of AML patients display high APOC1 and APOE expression and those patients have a poorer prognosis (see our Supplementary Figure 10C and D).

As multiple enhancers often regulate a single gene, it is possible that ZNF320 is regulated by two transposon-derived enhancers, LTR5B and LTR2B. In our CRISPRi experiments, we also see downregulation of ZNF888, but not ZNF321P.

– Have the authors assess the effect in proliferation of other genes downregulated, such as ZNF320, in the CRISPRi experiment?

We performed some preliminary proliferation assays in the LTR13A deleted cells, which acts as an enhancer of BIK gene. In line with the pro-apoptotic roles of BIK, we found that the clone with homozygous deletion of LTR13A had significantly increased cell growth rate when compared to two wildtype clones.

We did not assess the effect in proliferation of the element controlling ZNF320.