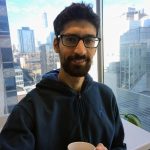 Developmental success in a changing environment requires that developing organs respond to external inputs. Growth and maturation, for example, depend on nutrient availability. This topic has been fruitfully explored in fruitflies (pun intended), where metamorphosis is delayed if the larva has not grown enough. Insulin/insulin-like signalling (IIS) and steroid signalling (SS) are the main players in the nutrition-dependent control of larval growth (both IIS and SS) and eventual metamorphosis (SS), but how and where they intersect to keep growth and maturation coordinated remains incompletely unknown.

Buhler et al. make three important discoveries that move this field forwards:
– Nutrition controls the last synthetic step of the steroid 20-hydroxyecdysone (20E) in the fat body (the functional equivalent of liver and adipose tissue, the purple region in the figure), and genetic impairment of 20E production in this tissue leads to a maturation delay and reduced systemic growth, associated with reduced systemic IIS.
– The authors warn that a commonly used IPC driver is also active in the trachea (blue network in the figure), which might lead to reinterpretation of previous experiments. In fact, they show that impairment of 20E signalling only in the insulin-producing cells (IPCs) of the brain, heretofore considered the main link between SS and IIS, leads only to a mild growth reduction. Fully reduced growth and IIS takes place when 20E signalling is reduced both in the IPCs and the larval trachea, which also expresses 20E receptors.
– The multiple downstream molecules involved in 20E signalling can have opposite effects on growth, depending on their position in the cascade (later steps tend to inhibit growth in a potential feedback loop) and the tissue where they act (deletion in the trachea frequently masks the effect of deletion in the IPCs).

Buhler et al. bring a breath of fresh air into the link between nutrition and growth, most remarkably uncovering a tissue –the trachea– that was not suspected to play any role. This study opens up exciting new research avenues and calls for reinterpretation of previous growth studies that used drivers with potential tracheal expression. 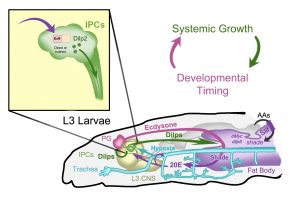 – Buhler et al. show that forced biosynthesis of 20E in the fat body of starved larvae rescues levels of some insulin-like peptides and wet weight, but not dry weight. Elucidating the exact growth contribution of each of the nutrient-affected tissues and pathways will require future studies.

– It was previously shown that hypoxia has a severe effect on larval growth acting through IPCs (Wong et al. 2014). Together with this study, these results suggest that it is the trachea that mainly responds to 20E to control IPC activity. This could be tested by trying to rescue hypoxic larvae (or larvae with diminished 20E receptor expression in the trachea) with 20E supplementation.

– The authors thoroughly characterize expression of nuclear receptors in IPCs, but I wonder what the repertoire is in cells of the trachea. Moreover, what happens when the 20E signal transduction machinery is systematically perturbed using trachea-specific drivers?

– A recent zebrafish study showed that reoxygenation-induced catch-up growth after hypoxia requires insulin signalling in neural crest cells (Kamei et al. 2017), suggesting that some of the links between nutrition, growth and hypoxia are conserved in vertebrates. I wonder whether the lungs play an unsuspected role in the coordination of growth and maturation.

Author's response and 'the story behind the story'

In short, this story personifies my personal experiences with work-life balance in academia. The initial results were obtained using a lot of unhealthy working habits, like sleeping in the lab and exhaustive working hours driven by a compulsive emotional need for results and success. Imbalance between work and life led to a fatigue and erosion of my happiness. In a lot of ways, work and out-of-work life are a lot like growth and maturation- opposing, energy-intensive processes requiring precise balance in response to many internal and external contexts. Though this all culminated with the discovery of the tracheal expression of the dilp2-GAL4 – thanks to a ‘difficult’ reviewer to whom I am now very thankful. The knowledge that much of my work was derived from a faulty tool and a semantic false positive was at the time – for lack of a better word – suffocating.

Furthering this curtain pull was the startling revelation that tracheal activity of GAL4 drivers appears to not be exclusive to the dilp2-GAL4, but affects many different drivers. The implications for the body of published literature using these drivers was, to say the least, daunting. How many phenotypes can be explained due to unintentional genetic perturbations of the trachea?

It was too that during this time, while elaborating on how nutrition controls shade, I realized that most departments with fly labs use completely different fly food recipes. Given the essential role of nutrition in most physiological processes, one can hypothesize that lack of standardization in this area could underly some of the reproducibility difficulties commonly experienced by many fly researchers, today.

However, as we chipped away at the mountain of work that was repeating a lot of these experiments and resolving the role of the trachea in this regulation – and what 20E was actually doing in the IPCs – things became more clear. Not only with respect to the possible role of the trachea in growth regulation, but also with the subtler role of 20E in the IPCs. By then, I had a healthier perspective on life in the lab, and a balance with life outside it. Much like the interaction between growth and maturation, which still requires room to breathe.