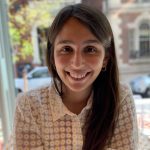 The neocortex is the brain region responsible for our higher cognitive functions. Its development relies on diverse neural progenitor types, which generate the compendium of postmitotic neurons. There are two main types of cortical neural progenitors: apical progenitors (AP), residing in the germinal ventricular zone, close to the ventricles, and basal progenitors (BP), localized in the subventricular zone (SVZ), a germinal zone located in more basal regions of the developing cortex (Florio and Huttner, 2014). The proliferative capacity of these two neural progenitor types is thought to underlie the enlarged cortical size and increased number of neurons characteristic of the human neocortex, which is larger than in any other primate (Florio and Huttner, 2014).

Extensive work in animal models has provided fundamental knowledge about the conserved mechanisms driving corticogenesis. However, the study of primate, including human, cortical development has been challenging due to the protracted length of this process which happens mostly in utero. With the advent of the stem cell field and organoid models, brain organoids provide a window to study primate/human-specific processes of neocortical development. Brain organoids are small 3D structures grown from embryonic stem cells (ESCs) or induced pluripotent stem cells  (iPSCs) which recapitulate certain events of neocortical development (reviewed in Velasco et al, 2020). Additionally, a handful of studies have shown their potential to unravel human-specific features of corticogenesis. Brain organoids have thus arisen as promising models to further investigate primate/human brain development.

ARHGAP11B is a human-specific gene implicated in human neocortical development (Florio et al, 2015, Florio et al, 2016, Kalebic et al, 2018, Heide et al, 2020). Its role in neural cortical progenitors has been previously studied in the mouse, ferret and marmoset neocortex, where it was shown that overexpression (mouse, ferret) or physiological expression (marmoset) of ARHGAP11B increases BP proliferation. In this study, the goal of the authors was to directly address the role of ARHGAP11B in primate corticogenesis, capitalizing on the use of chimpanzee – our closest living relative – and human brain organoids.

The authors genetically manipulated human and chimpanzee brain organoids by microinjecting selected DNA constructs, followed by electroporation. They assessed  the proliferation state by BrdU pulses and performed the experiments at ~ 51-55 days of in vitro development.

In conclusion, by using chimpanzee and human brain organoids, this study shows that ARHGAP11B is required for human BP proliferation. This work also shows that overexpression of ARHGAP11B can lead to an increase of proliferating BPs in other primates such as the chimp. However, the introduction of the dominant-negative construct did not cause any effect on chimp BP proliferation, suggesting the absence of another protein that may act similarly to ARHGAP11B in chimps.

Why I choose this paper

Cerebral cortex development is a highly intricate process, in which different types of neural progenitors are responsible for the production of the final neuronal progeny. Although many studies over the last decade have investigated species-specific mechanisms of neural progenitor behavior, this question still remains open and more work is required to fully understand how the human cerebral cortex is built and what makes it so unique.

This work focuses on a human-specific gene with a known function in cortical development to further shed light into this highly relevant topic. Additionally, it contributes to the slowly growing  list of studies showing the potential of brain organoids to study aspects pertaining to brain evolution.

These experiments were performed at a very narrow window of in vitro development. Is there a time-window for ARHGAP11B’s role in corticogenesis? Would you expect similar results if you insert the dominant-negative construct or overexpress ARHGAP11B in human and chimpanzee organoids, respectively, at a different time point?

Have you done a deeper analysis of the identity of the BPs which are affected upon your genetic manipulations, both in human and chimpanzee organoids?

We believe that the time-window for ARHGAP11B’s action corresponds to the time-window during corticogenesis when basal progenitors are active, self-renewing themselves and generating neurons.

Not in the manuscript that is on the preprint server. However, we are currently in the process of examining the effects of ARHGAP11B expression on basal radial glia vs. basal intermediate progenitors.

excellent review and questions by Ana Uzquiano . Thank you Ana!
What I don’t like in this paper is the use of dominant negative construct. The function of such contracts is complicated, I wonder if loss of function experiments using RNAi has the same effect.