The famous zebrafish stripes have often been used as a model for pigment patterning in animals. Three pigment cell types contribute to the stripe pattern – black melanophores in the stripes themselves, yellow xanthophores in the interstripe regions, and reflective iridophores which reside in both. Iridophores have different morphologies depending on their local environment – they are cuboidal and densely packed within interstripes, whereas within stripes they are more stellate and spaced out.

Previous work[1] investigating how the zebrafish stripe pattern emerges and propagates has suggested that iridophores take a central role in organising the process. The current model is that iridophores proliferate, differentiate and pack together densely to form the first interstripe in juvenile fish. Over time, some of these interstripe iridophores adopt a looser morphology and migrate into developing stripes. After a period of proliferation, some of these ‘loose’ iridophores then reaggregate again to form a second interstripe. Therefore, a single iridophore cell type is predicted to transition between dense and loose configurations to pattern the fish.

However, this preprint by Gur, Bain and colleagues proposes an alternative model, whereby iridophore progenitors do not interconvert between dispersed and dense morphologies, but instead take cues from surrounding melanophores to differentiate into one of two iridophore subtypes – stripe and interstripe – with distinct physical and transcriptomic characteristics.

In order to study the movements of iridophores during patterning, the team conducted live imaging experiments using the iridophore-specific fluorescent reporter line Tg(pnp4a:mCherry). Despite imaging larvae for over 300(!) hours, the authors did not observe any interconversion of pnp4a:mCherry+ iridophores between interstripes and stripes, conflicting with the previous migration model. To test this further, the team conducted a fate mapping experiment using a pnp4a:mCherry reporter line also containing nuclear mEos, a photoconvertible green to magenta fluorescent protein. A week after photoconversion of an interstripe region, pnp4a:mCherry cells had white nuclei, from a mixture of photoconverted magenta, and more recently translated green unconverted mEos fluorescence. In stripes however, only pnp4a:mCherry cells with green nuclei were observed, confirming that no interstripe iridophores migrated into this region.

This led the authors to hypothesise that rather than being from the same differentiated cell population, stripe and interstripe iridophores might represent distinct cell subtypes. To test this, they investigated the physical and transcriptional differences between the two in greater detail. 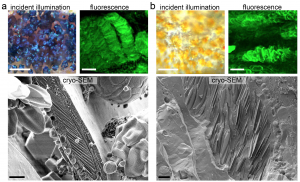 From preprint Figure 3 (with permission from authors). Left – blue stripe iridophores and black melanophores under incident illumination and under fluorescence after staining with malachite green. Underneath, cryo-SEM images show guanine crystal stack architecture. Right – as left, but for interstripe iridophores and yellow xanthophores.

Taken together, this suggests that stripe and interstripe iridophores arise by in situ differentiation depending on their surrounding environment, and represent distinct cellular crystallotypes.

I must admit that in these unusual times I found the pretty images of zebrafish stripes in this preprint quite soothing! It was also good to learn more about iridophores, which aren’t nearly as well covered in the literature as melanophores for example. More specifically, I liked how the live imaging, fate mapping analyses, and different transgenic lines were used in conjunction with X-ray diffraction and SEM to investigate the guanine crystal structure – something I’ve not seen in zebrafish papers before but really neatly illustrates the differences between stripe and interstripe iridophores.

Q1 – Previous work supporting the ‘morphogenic respecification’ model used a sox10-based fluorescent reporter line for tracing analysis, and images these cells migrating and proliferating in stripes and interstripes[1]. Why do you think your findings with the pnp4a reporter line are different? Might sox10+ iridophores represent an earlier iridophore progenitor still able to migrate, and pnp4a expression only occur after migration ends?

sox10-Cre labels all neural crest derivatives. So sox10-Cre+ cells were most likely earlier in the lineage, and progenitors to both types. This is interesting because it suggests that single progenitor cells can make (transit-amplifying?) progeny that migrate to the skin and then decide which subtype to differentiate into. Our clonal analyses using pnp4a[2] support this idea. Key in the present manuscript was to use real-time imaging as the cells were developing, and also fate mapping to figure out which cells were already on-hand. There’s just so much proliferation and movement that it’s difficult to work out the event from a single (early) label, even when cells are imaged repeatedly.

Q2 – Connected to this, how specific to iridophores is pnp4a? Cell clusters other than iridophores were detected by the RNA-seq analysis, and also express high levels of pteridine and carotenoid-associated genes – could these be xanthophores? Or other cell types entirely?

pnp4a is most strongly expressed in iridophores but the gene and its reporters are also on at lower levels in melanophores and xanthophores. Single cell RNA-Seq shows this really nicely[3]. This is true as well for some other commonly used reporters. Fortunately, pigment cells have their own autonomous markers (their pigment) and also different morphological hallmarks independent of color, so iridophores expressing pnp4a at high levels, and other pigment cells expressing at lower levels are pretty easy to distinguish.

We are in the midst of testing a couple candidate pathways for melanophores effects on iridophores (and some reciprocal interactions). The Nusslein-Volhard lab has observations that suggest xanthophores may prevent the spread of dense iridophores[4] and, reciprocally, it seems likely that iridophores promote xanthophore differentiation through either or both of a couple mechanisms[5,6]. We tend to think of these and other interactions as a pattern-generating engine; how the engine runs in zebrafish, and how it’s been tweaked in other species with different patterns, are the big questions in the field.