I’ll have Liver-Chips with that: researchers apply rat, dog, and human liver cells to organ-on-chip technology

Despite the extensive research into in silico, in vitro, and in vivo toxicity prediction models to date, accurately predicting the toxicity of drugs and toxins remains a scientific and clinical challenge. Indeed, the prediction of hepatotoxicity appears to be a particularly difficult challenge dogged by the twin problems of poor clinical translation and the rarity of idiosyncratic events that only appear as post-marketing signals. Therefore, models with greater predictive power are needed.

The key findings of the preprint by Jang et al. can be categorised into two sections: (A) development and characterisation of Liver-Chips, and (B) investigation and prediction of hepatotoxicity using Liver-Chips.

(A) Development and characterisation of rat, dog, and human Liver-Chips

Jang et al. constructed species-specific Liver-Chips lined by rat, dog, or human hepatic cells (Fig. 1). Primary hepatocytes were used to line the upper parenchymal channel; while liver sinusoidal endothelial cells (LSECs) were used, individually or in conjunction with liver Kupffer cells and stellate cells, to line the opposite side of the same membrane in the lower vascular channel.

By comparing the albumin secretion ability of the dual-cell Liver-Chips (which contained only hepatocytes and LSECs) to hepatocytes cultured alone in static sandwich culture plates, Jang et al. found that higher physiological function was maintained in the case of dual-cell Liver-Chips than in the monocultures. In fact, this function approximated that which was expected from in vitro-in vivo extrapolation (IVIVE).

The physiological function of dual-cell Liver-Chips was reinforced by the drug metabolising capacity of the hepatocytes over time using CYP1A, CYP2B, and CYP3A. Jang et al. found that while there was a significant decline in CYP activities in rat, dog, and human hepatocytes in sandwich monoculture plates over 14 days, these activities were maintained in the case of dual-cell Liver-Chips.

Jang et al. then tested the dual-cell Liver-Chips’ response to drug-induced liver injury (DILI) using bosentan, a bile salt export pump (BSEP) inhibitor that only affects human hepatocytes. From their results, the authors showed that the dual-cell Liver-Chips could be used to establish links between a toxin’s mechanism of action and its physiological and functional effect on the liver.

(B) Detection and prediction of hepatotoxicity using Liver-Chips

Having established that dual-cell Liver-Chips could be used to investigate mechanisms of drug-induced liver injury (DILI), Jang et al. added species-specific, non-parenchymal cells (i.e. hepatic stellate and Kupffer cells) into the vascular channel, thus producing a quadruple-cell Liver-Chip model. Following characterisation and validation, various drugs were tested for their effects on the quadruple-cell Liver-Chips (Table 1). Specifically, this section includes the modelling of steatosis and identifying markers of fibrosis in Liver-Chips, the use of species-specific Liver-Chips to query human relevance of animal liver toxicities, and the identification of risk for idiosyncratic DILI using the human Liver-Chip.

Table 1. Toxins tested on Liver-Chips and their key findings 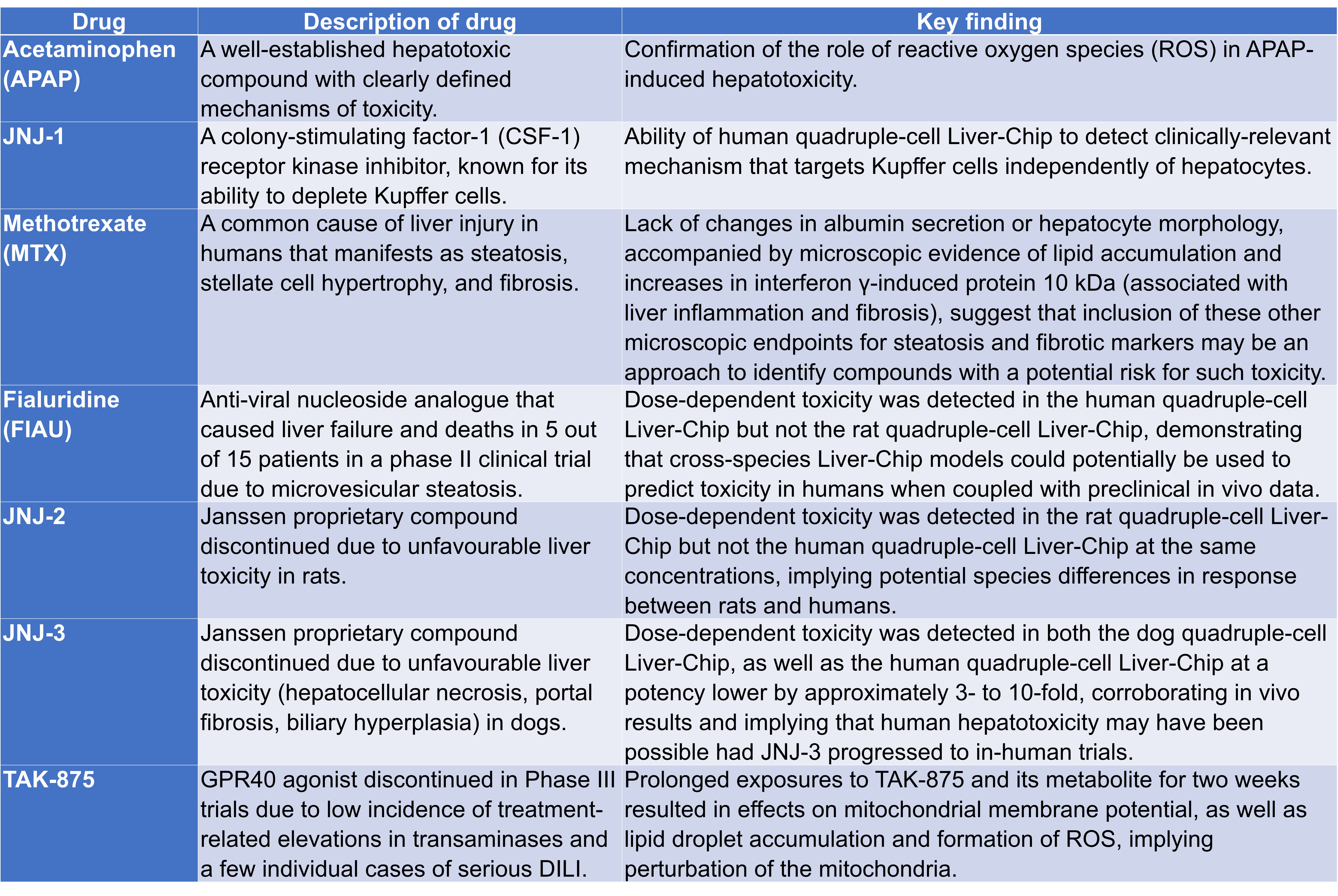 Significance of this preprint: Current developments and future directions

In my last preLight, I wrote about the invention of a Bile Duct-on-a-Chip by Du et al. [1]. Similarly, the species-specific Liver-Chip engineered and validated by Jang et al. is an interesting invention that joins researchers’ arsenal of organ-on-chip models available for pharmacology and toxicology research. Indeed, given the anatomic and physiologic proximity between the liver and the bile duct, the descriptions of the miniaturisation of the hepatobiliary systems complement each other.

In this preprint, the authors test the toxicity of different known drugs or toxins on their invention, and show how Liver-Chips could potentially be used to characterise and even predict the toxicities of drugs and their metabolites in preclinical studies. Indeed, the data collected from Liver-Chips may complement preclinical data, aiding researchers and pharmaceutical companies in developing more inexpensive, more rapid, and more accurate methods of detecting the toxicities of drug candidates.

It is especially promising that the Liver-Chips were able to detect idiosyncratic DILI responses, as illustrated by TAK-875 in this preprint. This is because there are a few clinically-approved drugs that are also known to give rise to idiosyncratic DILI, especially antimicrobials such as tetracycline antibiotics, antitubercular agents, and anti-HIV antivirals. What challenges do you foresee in using the Liver-Chip model to predict or investigate the hepatotoxicity of these other agents, and what modifications to the testing procedures might be needed to overcome these difficulties?