Rate of embryonic development varies widely across species. In mammals, large-bodied species tend to have slower development rates and increased lifespan compared to small-bodied species. For example, the rate of human embryo development is about 2-3 times slower than mouse embryos even though their overall embryonic size is similar, and they undergo the same series of developmental steps. Recent work has identified the underlying cause of these differences as coming from differential rates of protein production and degradation between the two species1,2. However, what leads to these different biochemical speeds in the two species remains unknown. In this preprint, Diaz-Cuadros et al. provide the first clues towards understanding this phenomenon by investigating the role of metabolism in regulating development rates within a specific developmental process, termed the segmentation clock.

The segmentation clock is a tissue-scale rhythmic patterning system in vertebrates. Locally synchronized waves of genetic transcription sweep from the posterior of the embryo to the anterior providing spatiotemporal information to morphological somite formation. Somites are segmented tissues in the embryonic mesoderm, which give rise to the adult musculoskeletal system. Somites form in a periodic manner – about every 5 hours in human embryos and about every 2.5 hours in mouse embryos – and this periodicity emerges from periodic transcriptional waves. Given the difference in periodicity between humans and mice, the segmentation clock can be used as a powerful system to probe underlying processes driving differential rates during development. To follow periodic transcriptional waves, the authors had previously established a methodology to recapitulate the segmentation clock in vitro from pluripotent stem cells (PSC)3. Here, the same in vitro system was used to investigate the role of metabolism in the differential periodicity of the segmentation clock.

The authors first developed a protocol to differentiate mouse and human PSCs towards presomitic mesoderm (cell type which exhibits segmentation clock oscillations) fate under identical media conditions. An accelerated differentiation efficiency, a faster cell cycle rate and more frequent oscillations in mouse cells indicated an approximately two-fold difference in developmental rate between mouse and human cells (Fig. 1A). The observed developmental rate was cell autonomous as the segmentation clock period did not change in isolated cells nor when human cells were co-cultured at low density with mouse cells.

To investigate the source of this differential developmental rate, oxygen consumption rate (OCR) and glycolytic proton efflux rate (glycoPER), which both serve as proxies for metabolic rate, were determined. Surprisingly, both rates were similar between mouse and humans. However, as the total mass and volume of human cells were twice that of mouse cells, it was concluded that a good comparison is only possible by considering mass-specific metabolic rates, which represents the rate at which cells consume energy per gram of cell weight. Accordingly, mass-specific OCR and glycoPER were found to be twice as fast in mouse cells as in human cells (Fig. 1B). A faster mass-specific metabolic rate in mouse cells was further confirmed through multiple independent measurements of glucose consumption, lactate secretion and glutamine consumption, as well as through comparison of mouse and human neural progenitors differentiated in vitro from PSCs. 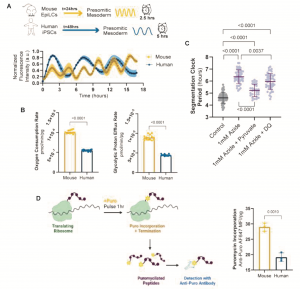 The authors then proceeded to test which aspect of metabolism controls developmental rate. Given that segmentation clock oscillations are known to be affected upon perturbation of respiration but not glycolysis, human presomitic mesoderm (PSM) cells were treated with small molecule inhibitors of the electron transport chain (ETC). Inhibiting ETC complexes I, III, and IV in human PSM cells resulted in a significant lengthening of the segmentation clock and damped oscillatory dynamics, while inhibition of the ATP synthase had no effects. These results suggest that ETC, rather than ATP synthase, activity is involved in the regulation of the segmentation clock. To further test the hypothesis that cellular ATP levels do not regulate the segmentation clock, the authors cultured human PSM cells in multiple conditions that increased the cellular concentration of ATP. These conditions did not shorten the segmentation clock period and increased cell cycle length, indicating slower proliferation. Therefore, the authors concluded that increased levels of ATP do not mediate the accelerated developmental rate of mouse cells.

Open questions for the authors