Changes in gene expression and physical form are intricately linked during development, but how do we begin to measure both on a continuous timescale? Mitchell et al provide a path forward with their Morphodynamic Atlas 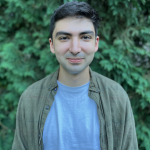 Embryos of the fruit fly Drosophila melanogaster have, for over a century, drawn scientists from disparate fields into the study of developmental biology. In recent decades, physical biologists have made strides in understanding the role of morphogen gradients in patterning the body plan (Grimm et al., 2010) as well as the spatial precision with which gene expression patterns can be established and interpreted in the presence of noise (Petkova et al., 2019). These studies have benefited greatly from rigorously controlled quantification of gene expression, as well as the relatively simple geometry of Drosophila embryos. Because of this geometry, it is common to measure the expression levels of gap genes or the concentration of Bicoid with just a single spatial parameter, measuring only distance from the anterior pole of the embryo.

While this one-dimensional view of the embryo has proven useful for both theorists and experimentalists, its limitations become obvious during later morphological events such as gastrulation, where cell flows in multiple directions give physical form to the different germ layers (Streichan et al., 2018). Recent evidence from later stages in Drosophila development indicate that multi-dimensional cell flow may play important roles in generating tissue-level patterning (Gallagher et al., 2022). In this preprint, Mitchell et. al leverage advances in microscopy to generate in toto views of gene expression patterns and cell flows across developmental time and present an analysis pipeline that allows for quantitative comparisons of these features across embryos. This “Morphodynamic Atlas” and the accompanying tools open new doors for studying the relationships between tissue patterning, cell flows, and gene expression patterns. The authors also show that their technique can be applied to later stages of embryogenesis such as organ formation.

Physical models of development often employ continuous time and space variables, but variation across embryos in developmental timing and tissue deformation can complicate comparisons between these models and experimental data. Mitchell et. al use light sheet microscopy and computational tissue cartography techniques to map the 3-D volumetric imaging data onto a 2-D parameterization of the embryo’s surface. By live imaging the pair-rule gene runt across multiple embryos, they can use its expression pattern as a landmark for building a consensus timeline of development through germ band extension, retraction, and maturation. They also use a similar technique to align images of embryos based on total tissue deformation. Both fixed and live samples can then be compared to this continuous “morphological timeline” to place each image of an embryo at a precise point in developmental time. (Figure 1) 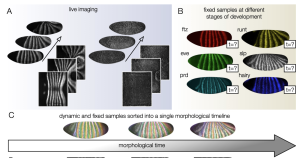 Figure 1: Live images of runt gene expression and a myosin marker (sqhGFP) are spatially and temporally aligned to define a continuous morphological timeline. Fixed images can then be accurately placed along this timeline based on their gene expression and tissue deformation. (Pre-print Fig. 1 A-C)

After generating the atlas of tissue deformation across developmental time, the authors were able to ask how tissue flow patterns evolve during embryogenesis. By comparing instantaneous tissue flow between each imaged time point, the authors observed discrete periods of autocorrelated flow patterns. In other words, the flow patterns across specific ranges of time were highly self-similar. Additionally, these periods of self-similar flow patterns corresponded to previously characterized morphological events such as germ band extension and retraction. These data indicate that tissue flow is quasi-stationary; sources of tissue flow on the embryo’s surface remain fixed during discrete periods of time, with changes in the flow pattern happening in between these morphological events. The authors also found that these flow patterns scale with temperature. Although changes in the temperature can speed up or slow down the overall rate of development, they do not affect the location or direction or tissue flow.

At first glance, the findings of this paper are not particularly shocking. The “discrete morphological events” of germ band extension and retraction have been well characterized, and temperature variations have long been known to affect the rate of development. Instead, I chose it because of the vision it presents for collecting, analyzing, and interpreting data.

Light sheet microscopy can give unprecedented spatial and temporal resolution of embryonic development, yet the full resolution of the data is rarely ever utilized. The authors of this preprint have developed a toolkit that gives researchers a new language to describe Drosophila development. Rather than reducing development to a handful of stages based on nuclear cycles or qualitative morphological changes, the authors have developed a way to examine changes in shape and gene expression as they naturally occur, on a continuous timescale. In doing so, the authors were able to recapitulate previously understood facets of development, uncover new features of morphological patterning, and provide a rich data set for researchers working to develop field theories of patterning. I am excited to see what discoveries, both experimental and theoretical, are made possible by this technique in the future.

Thank you for your interest in our work and for contributing this piece. PreLights provides an excellent service to the community!

1. The surface of the early embryo is indeed curved, so there is some deformation in the mapping to the plane – just like in a map of the earth. However, because we know the mathematical form of the mapping, we can correct for these deformations whenever we carry out quantitative measurements (e.g. of angles, distances, or regional averages). In contrast with the almost spherical shape of our earth, the fly embryo is nearly cylindrical. This means that curvature – and map deformation – is almost entirely concentrated at the anterior and posterior poles, as shown in the figure below and in Supplementary Figure 2 of Heemskerk & Streichan Nature Methods (2015). Therefore, the clear majority of pixels in our pullbacks are relatively unaffected by map deformation – the surface area corresponding to each pixel varies little, with a standard deviation of <20%. This means that when we work away from the poles, and make measurements only used for time alignment, the map deformations become so weak that they hardly affect the result. We accounted for the variations in dilation across the map in Figure 4 and note that weighting each pixel’s contributions to the r.m.s. velocity changes the resulting curves by only ~3%.

Q2: At times when little to no autocorrelation in tissue flow was observed on the whole-embryo scale, are there shorter length scales at which high autocorrelation might be observed? E.g. are there sub-domains within the embryo that might still exhibit stationary flow?

2. For the 16-hour dataset shown in Figure 3, there is little to no autocorrelation in tissue flow between germ band extension and germ band retraction, and again after retraction. In these

periods, the flow fields at the surface of the embryo are weak, leading to little autocorrelation. However, there are coherent and persistent motions of tissue migration inside the embryo which could potentially exhibit analogous ‘morphodynamic modules’. For instance, after germ band retraction, while the ectodermal motions again slow down, the gut dynamics shown in Figure 5 occur deep inside the embryo and show signs of modular behavior. Later during maturation, there is only noisy autocorrelation at the ectodermal surface. During this time, the embryo experiences rapid muscle contractions, leading to pulsed peristaltic-like motions and rotations which generate noisy signals in the autocorrelation. These would show sustained positive autocorrelation only on much shorter timescales, such as 1-10 seconds. It is intriguing to consider observing development with these fast motions ‘subtracted off’ – i.e. to observe the slow dynamics that persist whilst the embryo’s rapid movement is underway.

3. Finally, we would like to add a comment on where we believe the novelty of our results lies. As you point out, this study builds on a prolific body of work that has produced in-depth analyses of component features (ventral furrow, posterior midgut, cell intercalation/convergent extension) of germ-band extension and retraction. While previous reports have made clear that morphogenesis is stereotypic across individual embryos, to our knowledge the observation that global tissue flow is quasi-stationary for discrete periods during germ-band extension and retraction is novel. Note that identifying a stage by its quasi-stationary flow is altogether different than identifying a stage by the tissue shape; indeed, the shape is continuously changing throughout such a process. We believe the observation of “morphodynamic modules” – enabled by our in-toto approach – raises significant questions about how physical or chemical regulatory inputs can lead to sustained patterns of tissue flow despite mass migration of the underlying cells. Similarly, while it is understood that temperature influences the rate of embryo development, the striking observation that the pattern of tissue deformation only speeds up or slows down as a whole – and remains otherwise undistorted – suggests an astonishing capacity for adaptation, particularly in light of our measurements showing a different scaling for the appearance of mitotic domains. Understanding the molecular bases for these scalings represents exciting future work, as does the question of how different scalings overlay to create reproducible morphogenetic stages across different environmental conditions.