Gene regulatory networks (GRNs) are formed of molecular regulators encoded in DNA, which process information from transcription factors and signalling molecules to regulate many growth and developmental processes. Much of what we know about vertebrate GRNs is inferred from manipulation of candidate genes, and GRNs of simpler organisms – the sheer complexity of vertebrate gene regulation makes it extremely difficult to gain an unbiased view of GRN interactions in vertebrate development. This has not deterred the authors of a recent preprint from the Sauka-Spengler lab, however. Their work shows the output of an enormous effort in reconstructing the chick neural crest (NC) GRN using both transcriptomic and epigenomic profiling, thus creating the first high-resolution, genome-wide reconstruction of a vertebrate GRN in vivo.

To gain an overview of the early cranial NC transcriptional landscape, the authors isolated NC cells from chick embryos at both pre-migratory stages (5-6ss) and early migratory stages (8-10ss) for RNA seq. The data clustered into 13 gene expression modules that are associated with the changing nature of the NC as cells undergo EMT and delaminate from the neural tube. To investigate the regulation of these processes at the epigenomic level, the authors performed ATAC-seq in conjunction with Next-Generation Capture-C on stage-matched samples. This revealed differences in chromatin accessibility upstream of core NC genes, revealing the presence of enhancer elements, as well as physical interactions between these and putative target genes.

Diving deeper into the ATAC-seq data, the authors performed k-means clustering analyses based on patterns of chromatin accessibility. Of particular interest was “k-cluster 3”, which contained elements only accessible in NC cells, and “k-cluster 9”-containing elements, enriched in both the NC and neighbouring neuroepithelial ectoderm. Cis-regulatory elements from both these clusters were then assigned to their nearest-neighbour genes, in order to build predictive networks of how different combinations of active enhancers cooperate in NC gene activation.

What I think makes this preprint so special, is that predictions made from their different datasets are tested and visualised in vivo. For example, the locus of Sox10 – a known master regulator of NC cell fate – was investigated by ChIP-seq to find novel putative enhancers. The activity of these enhancers was visualised in vivo by electroporating chick embryos with fluorescently-tagged enhancer reporter constructs. Individual Sox10 enhancer activity was spatially and temporally diverse, showing complex cis-regulation of its expression, as seen below: 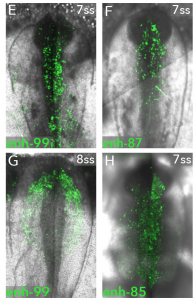 From preprint Figure 4. In vivo activity of novel Sox10 enhancers at the 7 and 8 somite stage.

Taking this a step further, CRISPR-mediated genome editing was employed to test the functionality of these Sox10 enhancers. Guide RNAs targeting each enhancer were electroporated into chick embryos alongside the transcriptional repressor dCas9-Krab, thus selectively disrupting their activity. Subsequent RT-qPCR analysis on isolated neural tubes showed that disruption of single enhancers did not affect Sox10 expression for long, but simultaneous repression of certain enhancer combinations caused long-term repression.

So, does this heterogeneity of cis-regulatory elements influence NC lineage decisions? GO term enrichment analysis was performed on genes associated to k-cluster 3 and 9 elements. This confirmed that open k-cluster 3 elements drive NC development and differentiation programmes, whereas open k-cluster 9 elements prime cells for more neural fates. To investigate if these differences produce meaningful transcriptomic changes within individual NC cells, single cell RNA-seq was performed at the point of NC delamination. PCA analysis of the data revealed three gene clusters. Sc-cluster 1 and 3 strongly overlapped with k-cluster 3 genes and were characteristic of the canonical NC, whereas sc-cluster 2 was more characteristic of NC-derived neural progenitors, and strongly correlated with k-cluster 9 genes. Therefore, well before commitment of cells to distinct NC-derived lineages, there is already considerable heterogeneity in regulatory elements, which must be important for establishing diverse NC progenitor lineages.

In the final part of their paper, the authors identified transcription factor co-binding sites within their integrated transcriptomic and epigenomic data, thus building a comprehensive, genome-wide reconstruction of k-cluster 3 and k-cluster 9-dependent GRNs, and identifying the hierarchies of transcription factors that comprised each GRN’s minimal regulatory cores. Through CRISPR-Cas9-mediated disruption of these minimal cores and subsequent RNA-seq, the authors confirmed that the balance of k-cluster 3 and 9 GRNs, with likely cross-repressive interactions, regulates the balance between NC-derived neural and mesenchymal lineages.

If it wasn’t already clear, this research has generated a huge amount of data, tying together transcriptional, epigenetic, single-cell and bulk RNA-seq experiments, as well as in vivo validation. Thankfully for neural crest enthusiasts unfamiliar with manipulating large datasets, the authors have assembled their data into a user-friendly Shiny App (R-based, available from GitHub). Below are screenshots of the App interface visualising the upstream regulatory elements and k-cluster-dependent transcriptional networks of TFAP2B: 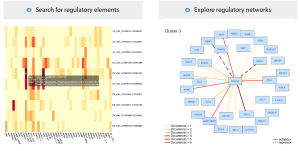 From Figure 7 in the preprint. Images from the Shiny App showing the regulatory elements, and transcription factor networks for TFAP2B

This preprint represents an incredible amount of work and team effort, and I was amazed by the number of Next-Generation seq analyses that were performed throughout the study, but nevertheless effectively pulled together to build a cohesive story about the early NC GRN. Secondly, whereas other large scale transcriptomics/epigenomics studies sometimes conclude with their computational predictive models, this preprint matches their intricate dataset analyses with ambitious in vivo work too.  For people like myself, who are more comfortable with wet lab experiments than manipulating huge datasets, the provision of a friendly app interface to enable the research community to play with the data themselves is a very valuable resource.