From spiral cleavage to bilateral symmetry: The developmental cell lineage of the annelid brain

An embryological solution to a geometrical problem: the developmental cell lineage of an annelid worm sheds light on the spiralian transition from rotational to bilateral symmetry. 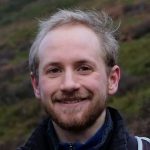 Spiralia (aka Lophotrochozoa) is a large clade of marine invertebrates, including important phyla such as annelid worms and molluscs. Due to stereotypic “spiral cleavage” patterns, spiralian embryos exhibit rotational symmetry, but adult spiralians tend to be bilaterally symmetric. This spiral-to-bilateral transition has puzzled embryologists since at least the 1890s, when E. B. Wilson published his pioneering study of the polychaete worm Nereis. Do spirally arranged cells reconfigure their positions by migration, do small numbers of highly-proliferative “bilateral founder” cells take over the embryo, or do cells with non-equivalent lineage histories acquire equivalent identities?

This study demonstrates that for the annelid brain, the answer is a combination of possibilities two and three. Vopalensky and colleagues carried out time-lapse microscopy of fluorescently labelled, apically-mounted Platynereis dumerilii embryos. (Platynereis, a polychaete worm in the same family as Nereis, is now the premier spiralian model organism.) They were able to track cell divisions until early larval stages, and create a consensus developmental cell lineage of the Platynereis “episphere” (future head). By cross-referencing this lineage tree with gene expression atlases and morphological markers, they could map various cell types onto the tree, and then compare the ancestries of each pair of bilateral clones.

It turns out that the developmental strategy employed by a particular brain region depends on its position within the embryo. In lateral regions, where rotational and mirror-image symmetries align, the pairs of bilateral founder cells tend to represent corresponding lineages from opposing embryonic quadrants. However, in more medial regions, where this is not the case, bilateral founders tend to stem from different lineages within opposing quadrants, or even from separate lineages within the same quadrant. The overall pattern of clonal origins therefore represents an adaptation to the geometrical constraints inherent to spiral cleavage. 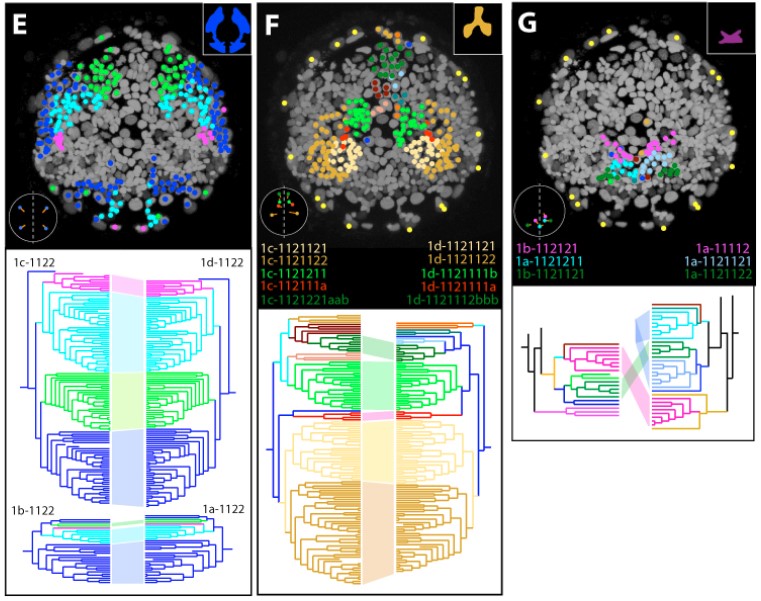 Some examples of bilateral clones (top), and their corresponding lineage trees (bottom). In lateral regions (E), bilateral founders tend to stem from similar lineages, while in medial regions (F,G), the lineages of the founders are often different.

Until recently, spiralians have been relatively neglected by developmental biologists, with much more attention given to their ecdysozoan and deuterostome cousins. However, modern techniques are currently facilitating rapid and exciting advances by Platynereis labs, and these little marine worms are leapfrogging many other model organisms to rank with the likes of C. elegans and Ciona intestinalis as some the best characterised animals on the planet. This preprint, which also serves as an accessible introduction to spiralian development, is a nice example of this trend.

I also thought that this preprint was a fitting one to highlight this month, given the sad passing of John Sulston, who determined the cell lineage of C. elegans. Fluorescent markers and cell tracking algorithms will have made reconstructing the Platynereis cell lineage a less painstaking task than it was for C. elegans, but the usefulness of the resulting knowledge remains the same as ever.