Hedgehog and glycolysis: the perfect team to regulate energy production in the developing Drosophila wing disc. 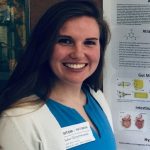 Developmental tissue growth is an energy-dependent process that relies both on ATP levels and the production of biosynthetic precursors. The concept of “aerobic metabolism” (i.e., Warburg effect), where increased glucose uptake occurs despite active respiration, has been widely studied in the context of cancer. The increased glucose uptake allows cancer cells to redirect glycolytic metabolites to biosynthetic pathways needed for growth. Recently, studies have emerged showing that some developing tissues and/or cells display aerobic metabolism as well (1-3), and that glycolysis regulates developmental processes such as migration and differentiation. In addition, connections between morphogen signaling (e.g., Wnt, FGF, Hh) and metabolism were established lately in different developmental contexts, and it is of continued interest to determine how manipulating one may affect the other (1, 4). However, research in this field is in its infancy. In their preprint, Nellas et al use a fluorescent biosensor to study the spatial dynamics of ATP within the Drosophila wing disc and how Hedgehog (Hh) signaling influences energy production during development of this tissue.

Using a FRET-based ATP sensor, the authors found that ATP levels remain steady throughout the wing pouch, but decrease significantly upon oxidative phosphorylation (OxPhos) inhibition with antimycin A. Upon closer inspection, the authors noticed that with antimycin A treatment, ATP levels declined significantly slower in two specific regions of the wing disc as compared to the rest. These regions of slower ATP decline were within known growth “organizer” regions: in the Dorsal-Ventral (DV) boundary, which has high Wingless/Notch signaling, and near the Anterior-Posterior (AP) boundary, which has high Hh signaling. The authors posited that these organizer regions may produce more ATP through glycolysis during OxPhos inhibition, and that this may explain why ATP levels decline more slowly. Inhibiting both OxPhos and glycolysis concomitantly resulted in a steep decline in ATP levels throughout the entire wing disc, including the organizer regions. Therefore, the authors concluded that most ATP in the wing disc is generated by OxPhos, but when OxPhos is inhibited, glycolysis continues to generate significant levels of ATP within the organizer regions.

These results suggest that morphogen signaling may control energy production within these growth organizer regions. Hh is expressed in the posterior compartment of the wing disc, where it then travels to the anterior to be received by the membrane protein, Patched (Ptc). Ptc is normally a Hh signaling repressor in the absence of Hh ligand, where binding of Hh to Ptc allows activation of gene expression through the downstream transcription factor Cubitus interruptus (Ci). Ptc was inhibited within the dorsal compartment of the wing disc via RNAi, leaving the ventral compartment as an internal control (Fig. 1A). This resulted in an overactivation of the Hh pathway within the dorsal anterior region, which had a significantly slower decline of ATP levels after OxPhos inhibition (Fig. 1C). To further assess whether the Hh pathway is required for glycolysis in the wing disc, a dominant negative form of Ci was overexpressed within the dorsal compartment. Upon loss of Hh signaling in this region, ATP levels declined faster than within the ventral compartment after treatment with antimycin A. Altogether, the results presented here and in their previous work (4), reveal a positive feedback loop between Hh and glycolysis that is needed to couple energy production and patterning during development.

This preprint utilizes a simple but powerful system, the Drosophila wing disc, to further study the interplay between metabolism and morphogen signaling, a topic where little is known. The results presented here add important and convincing evidence that developmental patterning events rely on metabolism, and vice versa. In addition, utilization of the FRET-based ATP sensor offers spatial information that is crucial when studying patterning events. Studies like this are helping to lay the foundation for other researchers exploring metabolic regulation during development.

Both values are needed to fully describe the kinetic profile and thus should be considered together. Neither is more reliable – rather, each provides different kind of information. The half-life describes the time needed to achieve the halfway point between max and base (A), whereas the Hill coefficient describes the slope of the fitted curve at the half-value (B). For example, in the case of the PtcRNAi discs treated with Antimycin, only the half-life changes significantly but not the Hill coefficient. Thus, the affected tissue is able to maintain steady state levels of ATP for longer than in the internal control, but when the levels drop, they do so with a similar rate. In contrast, in the CiDN case, ATP levels begin to decline sooner, and they drop even faster than in the control tissue. It will be interesting in the future to further investigate the underlying mechanisms, using both experiments and mathematical modeling.

We don’t know, as we have not explored the NAD+/NADH ratio or the overall redox state in the wing disc, so we can only speculate. There are some very interesting older reports in the literature of spatial patterns of NADPH producing enzymes in the wing. Colorimetric enzyme activity assays performed on wing disc explants indicate that G6PD is active in the DV but not the AP boundary, whereas IDH is active everywhere in the wing disc except for the AP boundary (Cunningham et al. 1983, Kuhn and Cunningham 1986). It would be interesting to look at the spatial expression and/or activity of NAD kinases and NADP phosphatases that interconvert these redox cofactors, as well as to look for any functional interaction with the Hh pathway.

In looking at both the preprint of this manuscript and the final version, which was recently published in EMBO Reports (http://dx.doi.org/10.15252/embr.202154025), there were some changes and additions made to the manuscript which have increased the robustness of the study and validity of the conclusions.

Some small changes were made to Figure 1. Specifically, another time point was added to the antimycin A treatment experiments, which tightens the quantitative data. The difference in the Hill coefficient that could be observed in the data included in the preprint is no longer there in the data of the final manuscript, but this has not changed the overall conclusions. Given that the half-life of the FRET efficiency was longer in the organizer regions, the data still indicates that ATP levels decline at a slower rate in the organizer regions of the Drosophila wing disc compared to non-organizer regions.

Later in the manuscript, the authors decided to combine the original Figures 3 and 4 into one figure (now Figure 3) in the final manuscript and then added a new set of experiments for their new Figure 4. These set of experiments looked at the effects of a hypoxic environment on ATP levels in the wing disc. They found similar spatial differences in ATP levels upon decreased levels of oxygen as compared to OxPhos inhibition. These experiments replicate the realistic hypoxic conditions that can be observed during normal Drosophila larval development.

While the final published version of the paper does not address the questions posed in my preLight, this does not take anything away from it. Those questions were outside the scope of the manuscript and may be discussed in a later study.