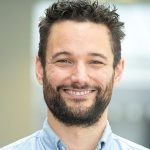 The mammalian brain is sufficiently accessible macroscopically that its truly phenomenal complexity and intricacy can come as quite a shock to those not au fais with neurobiology. How the cells that comprise such an organ self-organise and differentiate during development has long fascinated scientists. Cerebral organoids, are providing the clues to solve these questions by mimicking the development and function of the mammalian brain.

The challenge addressed here was to unveil the cell lineage dynamics that occur during cerebral organoid development as a proxy to in vivo brain regionalisation. It has been an ongoing problem to understand how regions are established during organoid development, how these regions self-organise and to what extent they recapitulate and are comparable to the mammalian brain. To do this, the authors developed an inducible lineage recording system that can be inserted in the genome using random transposition. Dubbed iTracer, this combines a highly complex barcoding library (11 random bases) with inducible CRISPR/Cas9 genetic scarring.

Genetic scarring involves the introduction of Cas9 protein, or the encoding mRNA, and a single-guide RNA directing Cas9 to GFP to cause a double-stranded break in the DNA of a single cell. The cell then must rapidly repair the break before subsequent cell divisions leading to mistakes, an insertion or deletion. The scars in the DNA are of random length and are unique to the GFP site. Daughter cells inherit the genetic scars during cell division and so cells originating from a common ancestor can be traced.

Leveraging the power and resolution of single cell transcriptomics to identify and read the genetic barcodes and scars, they reconstructed the lineage relationships and differentiation trajectories between cells during cerebral organoid development.

After testing in iPSCs for barcode complexity (81% of cells contained at least one barcode) and quantifying the number of insertions of the recorder with a transposon-based reporter (2.85 barcodes per cell), iTracer appeared to be suitable for lineage-coupled single-cell transcriptomics in iPSC-derived cells and tissues.

The authors wanted to use iTracer to identify lineage dynamics occurring in cells originating from a pluripotent state during cerebral organoid development. To test this lineage recording system in a developing organoid, organoids from ~2000 iTracer iPSC’s with five, scar induced, “developmental timepoints” (from day 4 to day 30) were sequenced at three single cell RNAseq “endpoints” (30, 45 and 60 days of culture).

Interestingly there seems to be a degree of reporter loss in the cells from this dataset with a variable number of fluorescent reporter cells, barcodes, and scars between organoids. Based on fluorescence, all starting iTracer cells contained the reporter, however reporter mRNA was only detected in about half (51%) of cells by the time of sequencing. The authors suggested transgene silencing and limitations of scRNAseq data as possible contributors to this loss. Importantly, in cells that contained the reporter at least one barcode was found in almost 75%.

The combination of iTracer barcoding and scar readouts with the resolution of scRNAseq facilitated the cell-type and brain region to be reconstructed and thus resolved into the lineage families of their original organoids and maternal iPSCs. Increased diversity in cell type was found within scar families that had been induced with Doxycycline at earlier timepoints. In one example, cells identified as having a cortical lineage could be separated from others at day 15. This suggests a patterning window may exist that defines regionalisation but the limited sampling of the whole organoid limits the conclusions that can be drawn from this at the moment.

To further improve the resolution achieved via iTracer/scRNAseq the authors micro-dissected cells from distinct parts (or regions) of organoids. This also raised the question as to how diverse spatially distant regions of the organoid are? Regions were found to be sufficiently distinct with iTracer identifying barcode and scar families showing transcriptionally divergent cell lineages.

The authors observed that barcode families accumulated differently in distinct regions of the organoids. Could these barcode enrichments be due to the spatial arrangements of the organoid? Using the 10x Visium platform, organoids were sectioned to identify transcriptome, barcode and scar topology. The 10x Visium platform facilitates classifying tissue based on total mRNA, this enables mapping the whole transcriptome with, crucially, morphological and spatial context. Remarkably, defined organoid regionalisation, could be resolved and assigned to equivalent telencephalon, diencephalon/mesencephalon, and rhombencephalon regions, as well as non-cerebral identities. The progressive combination of lineage-coupled single-cell and spatial transcriptomics identified distinct brain regions within organoids and that the cells within these regions have identifiable lineage compositions.

There are some caveats and limitations to iTracer addressed by the authors, in particular the lack of dynamic information that informs about the spatial restriction of lineages and how they expand throughout the developmental progression of the organoid and the loss of cellular specification. They speculated that this may be due to early spatial restriction of clones. To consider this the authors used live imaging with 4D lightsheet microscopy to directly track lineages of single nuclei. This revealed that during the initial growth of the organoid cells have very restricted cell migration thus leading to cell lineages with limited spatial positioning; the initial growth is then followed by brain patterning and cell fate commitment to achieve the identified homologous brain regions.

The progressive and imaginative combination of using lineage tracing in 3D cultured cells with the cutting-edge power and resolution of scRNAseq and spatial transcriptomics to begin to tease out the complexities cerebral organoid development highlights further the potential of organoids in exploring exceedingly complex developmental systems.