Beyond the Nucleolus: Ribosomal proteins synthesized and incorporated into ribosomes locally within axons contribute to axonal branching behavior. 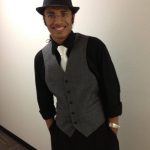 Numerous datasets have demonstrated that the subcellular distribution of mRNA within neurons is non-uniform, and specific subsets of transcripts are enriched within the axon – distant from the main cell body and the regulatory hub of the nucleus [1]. Furthermore, recent evidence has also demonstrated that these transcripts are actually translated locally within the axon in a manner that tracks with development and the maturation of neuronal circuits [2, 3].

Among the transcripts that localize to and are translated within axons are ribosomal protein genes (RPGs) – structural components of the machinery of translation. Their presence in the axon has long been considered a conundrum, since assembly of the ribosome has canonically been thought to occur in the nucleus/nucleolus – far from the axon. The textbook view of ribosome assembly involves RPGs being translated into ribosomal proteins (RPs) in the cytoplasm, which are subsequently imported into the nucleus to assemble with the ribosomal RNA (rRNA) in the nucleolus, forming the precursors to the ribosomal subunits. Once assembled, these precursor subunits are re-exported back into the cytoplasm, where they mature and assemble upon an mRNA to form the functional ribosome [4]. Now, the magnitude of the spatial separation between RPG transcripts within the axon, and the nucleus in the cell body render this a potentially very energy-expensive process. Therefore, it has been postulated that the local translation of RPs in the axon is indicative of local function, which, given the accepted pathway of ribosome assembly described above, has been speculated to be extra-ribosomal [5].

In this preprint, the authors challenge these underlying assumptions. They demonstrate that axonally translated RPs are incorporated into ribosomes within the axon itself and that this ‘remodeling’ of the ribosome has functional consequences for axonal branching.

The authors have previously developed an assay using a Boyden chamber that allows them to separate axons of retinal ganglion cells from the rest of the cell body and nucleus [3]. They find that translation of almost all of the RPGs (which were previously known to be enriched in axonal projections) transiently increases locally within the axon upon induction of axonal branching via Netrin-1. They find that increased axonal translation is dependent on a “Cis-element Upstream of the Initation Codon” (CUIC): a novel YYYYTTYC motif within the 5’ UTR of these transcripts.

Crucially, the authors demonstrate that RPs that are synthesized within the axonal projections remain in the axon. Mass-spectrometry further revealed that axonally-translated RPs –particularly RPs that are cytoplasmic facing in the ribosome – get incorporated into the axonal ribosomes. The most remarkable aspect of this result was that since the assay was performed in isolated axons that were severed from their soma, this incorporation occurred locally within the axon itself, eschewing the canonical ribosome assembly pathway which would require axonally synthesized RPs to travel to the nucleus. To my knowledge, this is the first demonstration of in situ incorporation of a RP into the ribosome without any nucleolar involvement.

Interestingly, some locally synthesized RPs like Rps4x and Rps14 are far more prone to the phenomenon than others, indicating that this isn’t full-scale ribosome biosynthesis within the axon, but rather an “add-on” to either modify or repair the axonal ribosome. This local incorporation of at least Rps4x is critical for proper functioning of the ribosome. In the absence of local Rps4x incorporation, axonal translation as measured by puromycin incorporation is severely abrogated – and this results in severe defects in axonal branching of the retinal ganglion cells.

In summary, signals that induce axonal branching during neural development induce localized gene regulatory responses within the axon. The signal induces CUIC-mediated axonal translation of RPs – some of which, such as Rps4x, get incorporated into ribosomes in their vicinity, thereby stimulating local translation of transcripts encoding for (presumably) proteins involved in axonal branching (Figure 1 – figure 7B in the manuscript). 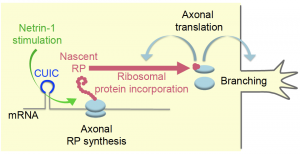 Open questions, future directions, and why I chose this preprint:

This is an extraordinary piece of work demonstrating not just axonal translation of RPs but also their local incorporation into ribosome, challenging decades of dogma. However, most of the functional assays within the manuscript have been performed using Rps4x. This makes sense, given that Rps4x shows the highest de novo incorporation into the ribosome of all of the RPs upon the induction of axonal branching (Figure 4C in the manuscript). Rps4x has previously been demonstrated to be amongst the most sub-stoichiometric of the ribosomal proteins [6]. These observations indicate at least two potential hypotheses

Distinguishing between these hypotheses, which respectively represent repair or modification of the axonal ribosome, requires careful stoichiometric analysis of ribosomal proteins within the functional ribosome before, during and after axonal branching – an experiment that is rendered more difficult by limitations of the starting material, as acknowledged by the authors. However, this system provides a potentially tractable model to address a critical question in the burgeoning study of heterogeneous ribosomes: are ribosomes truly ‘specialized’ to translate subsets of transcripts [7], or are the observed gene expression effects of specific RP deletions simply the result of a hypomorphic ribosome unsuccessfully navigating a (tissue-specific) hierarchal transcript landscape with different intrinsic initation and elongation rates [8]?

Two questions remain on the RNA front. Firstly, which transcripts are locally translated by the Rps4x containing axonal ribosomes that contribute to branching? Do they also contain the CUIC sequence motif enriched in RPG transcripts? Are they among the transcripts involved in neurogenesis/neuron projection differentiation/morphogenesis that harbor the CUIC motif (Figure 2C)? If so, that speaks to an interesting positive feedback loop wherein the presence of Rps4x containing ribosomes results in the translation of more Rps4x. How might the loop be terminated upon the cessation of axonal branching? Secondly, what is the trans-factor that enhances the local translation of CUIC containing mRNAs upon the induction of branching?

Finally, taking a birds-eye view, how generalizable is this phenomenon? Non-uniform transcript distribution within the cytoplasm is certainly not unique to neurons. Nor, in fact, is localized translation within cellular domains. One can imagine virtually any polarized cell (such as in the gut epithelium) leveraging similar mechanisms to achieve both energy economy and rapid responses [9]. Long gone are the days of envisioning the cytoplasm as a pool under the tyranny of Brownian diffusion. It is in fact a thriving city, a loose amalgam of neighborhoods, each with their own rules and personalities, and each worthy of intrepid exploration.