A classical hallmark of directional cell migration is the polarization of the migrating cells with a protrusive active migration front and a retracting back of the cells. Extracellular attractive or repulsive signals directly impact the formation and maintenance of this polarity and therefore the direction of migration. In various migrating cell types specific mRNAs have been shown to accumulate in a polarized fashion within the protrusive active front, which enables the cells to locally translate proteins that affect the dynamics of the actin cytoskeleton, for example. In neurons, the main cell body can be considerably further away from the protrusive active growth cone of the axon, hence locally translating proteins controlling the migration machinery assures that the cells can rapidly react on different cues from the environment on the local proteome level [1-3].

How the activation of guidance cue receptors on the cell surface triggers the spatially restricted subcellular translation of these localized mRNAs is not fully understood today. A previous report showed that in commissural axons the Netrin-1 receptor DCC directly associates with ribosomes, suggesting that the link from the cell surface receptor to the translation machinery can be very direct [4]. In how far such a receptor-ribosome coupling represents a more common mechanism that is employed by multiple receptors in different cell types to trigger locally restricted, selective protein synthesis remains elusive.

Koppers and colleagues investigated in the current preprint, whether the previously reported association between the DCC receptor and ribosomes is also evident in another system and whether such complexes would also be formed by other guidance receptors that had been implicated to control local axonal protein synthesis. To this end, they performed co-immunoprecipitation experiments for DCC, Nrp1 (the receptor for Sema3A) and Robo-2 (the Slit2 receptor) on Xenopus laevis brain and eye lysates, followed by mass spectrometry to identify the pulled-down interaction partners. Using this approach, the authors find that all three receptors interact with specific ribosomal proteins in a mRNA dependent manner. The EphB2 receptor, however, that does not act via controlling local protein translation, does not associate with ribosomal proteins in this experimental setup, indicating that such interactions may be specific to receptors that convey their signal via controlling the local protein production within the growth cone. Interestingly, the receptors seem to bind to individual sets of RNA-binding proteins, posing the possibility that these specific interactions control which ribosome/mRNA complexes are linked to a particular receptor. In line with this idea, the Holt lab found that DCC and Nrp1 associate with specific sets of mRNAs which at least partially correspond to known target mRNAs of the pulled-down RNA-binding proteins.

To challenge these findings from whole brain lysates on a cellular level, the authors investigated whether these protein interactions are also evident in retinal ganglion cells. Using proximity ligation assays (PLA), they confirm specific interactions between particular ribosomal proteins and DCC or Nrp1, respectively. Importantly, ligand stimulation of the receptors shows an impact on their binding to the ribosomal proteins, as the PLA signals strongly decrease after addition of the respective ligands to the medium, suggesting a rapid release of ribosome/mRNA complexes after receptor activation. An extracellular cue that has been previously shown to negatively impact local protein translation is EphrinA1, which antagonizes the Netrin-1/DCC induced protein synthesis in hippocampal axons. In line with this function, Koppers et al. report that co-stimulation of Netrin-1 with EphrinA1 does not result in a release of the ribosomal proteins from the DCC receptor but suppresses the increase in target protein levels that is detectable after stimulation with Netrin-1 alone. These results therefore indicate that the effect of different or opposing guidance cues can be integrated at the receptor-ribosome dissociation level, thereby controlling the selective translation of receptor specific mRNAs.

Taken together, the here presented findings pose a model (see Fig. 1) in which axonal guidance cue receptors can bind to specific subsets of mRNAs via their interaction with distinct RNA-binding proteins. Upon ligand activation of the receptor, the RNA/ribosome complexes are released resulting in the local translation of the free mRNAs. 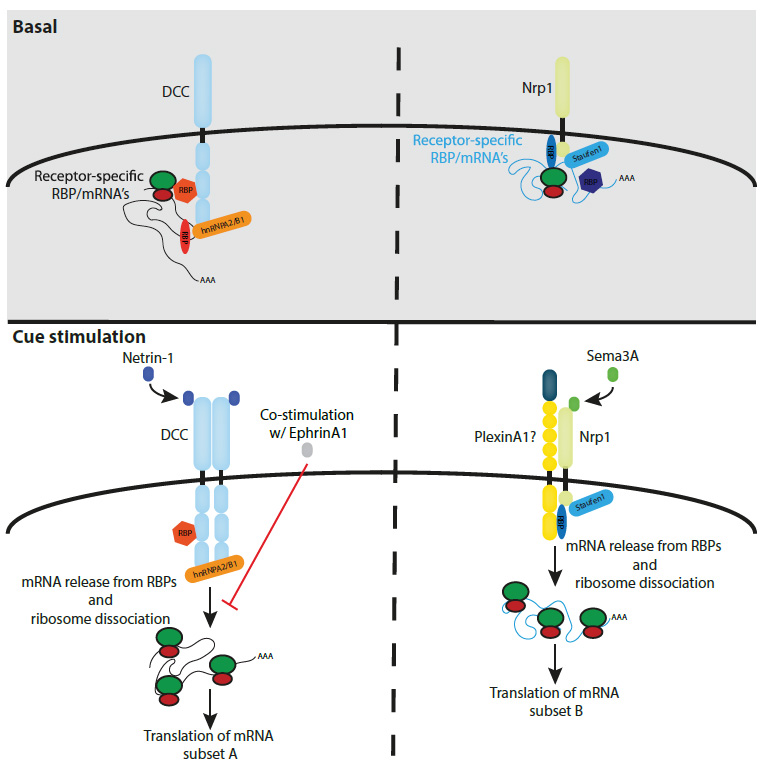 Fig. 1: Axonal guidance cue receptors bind specific sets of mRNAs, ribosomes and RNA-binding proteins, which are released upon cue stimulation leading to the local translation of the mRNAs (reproduced from Koppers et al., Fig. 5B).

Why this is cool

During cell migration attractive and repulsive extracellular signals can not only affect the activity or stability of intracellular proteins but can also influence the local proteome by triggering translation of mRNAs in certain subcellular regions. The results from the Holt lab show that the concept of tethering mRNA/RNA-binding protein/ribosome complexes directly to cell surface receptors is employed by multiple guidance cue receptors in different neuronal cell types and is also conserved in different species. It represents a mechanism by which activation of the receptor is instantly transduced into specific changes of the local protein composition which in turn can influence e.g. the velocity or directionality of the cell movement. Given the finding that subcellular targeting of specific mRNAs is an essential feature in many types of migrating cells including sprouting endothelial cells, for example, the here confirmed model of receptor-ribosome coupling constitutes a concept that might apply to cell movements in a broad variety of cell types and tissues.

How is the receptor-ribosome interaction regulated on the molecular level, does e.g. the phosphorylation status of the receptor affect its association with ribosomal proteins?

How do negative signals (EphrinA1) interfere with the receptor-ribosome interaction?

How is a premature translation of the receptor bound form of mRNAs prevented?