Using single-cell RNA sequencing on early mouse embryonic stages, the authors recapitulate the development of the neural tube and unravel the molecular mechanisms that underlie spatial and temporal neuronal diversity in the spinal cord. 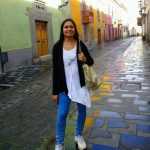 Using the 10X platform to perform single-cell transcriptomics on early mouse embryonic stages, the authors recapitulate the development of the neural tube and unravel the molecular mechanisms that underlie spatial and temporal neuronal diversity in the spinal cord.

In the vertebrate neural tube, morphogen gradients induce a transcriptional network that produces distinct progenitor domains, each generating diverse neuronal subtypes. The progressive organization of the domains in the dorso-ventral axis and the formation of the neural circuits are important to coordinate sensory input and motor output. The transcriptionally distinct domains (Briscoe and Small, 2015) harbor distinct neuronal subtypes (Jessell, 2000) in each region. Each transcriptionally distinct domain consists of different subtypes of neurons that function to give a specific physiological output (Hayashi et al., 2018). Although previous studies have characterized gene regulatory networks which define neural tube patterning and neuronal differentiation, they have lacked systematic molecular profiling of the developing neural tube. This can be attributed mainly to the complexity of the tissue, use of population-based techniques and previous focus on late time points.

Using the 10X platform for single-cell transcriptomics, the authors recapitulate neural tube development and decipher the growth and progenitor dynamics of the spinal cord. Computational methods used have helped the authors to predict novel gene patterns that support the generation of an expression atlas by focusing on genes related to neurotransmitter biogenesis and release (glutamate decarboxylases and vesicular transporters), cell adhesion molecules (claudins, cerebellins) and transcription factors (Hmx2, Sp9). This study also identifies gene modules that subdivide the major neuronal populations into further groups. Using this technique, the authors show that domain-shared transcriptional programs and sequentially- induced molecular signatures underlie the generation of diverse neuronal subtypes. Finally, by analyzing changes in gene expression the authors reconstruct the transition of a progenitor to a neuron using a pseudo-temporal approach. 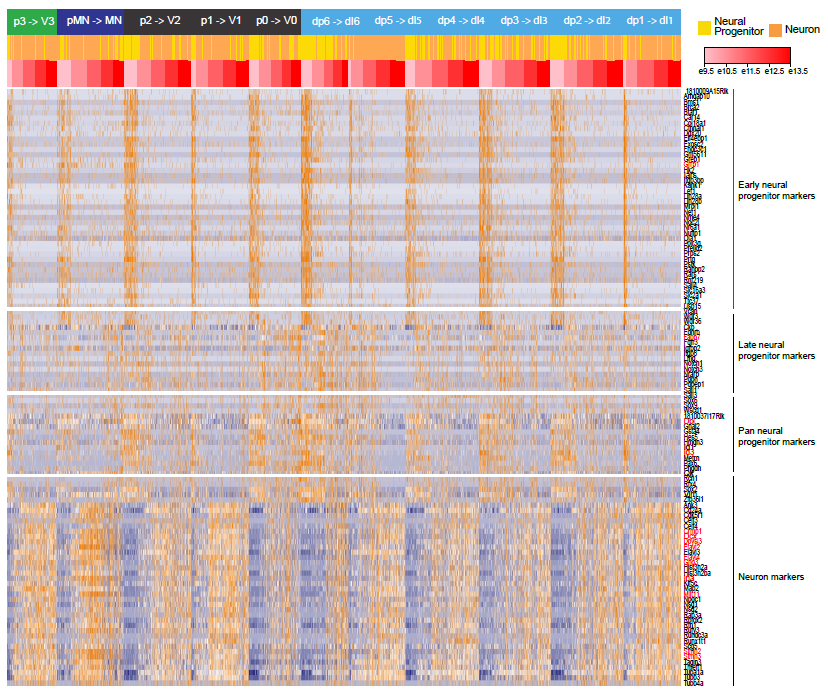 What I like about the work and why is it important

The spinal cord contains many different neuronal subtypes with distinct gene expression patterns that assist to form well defined circuits. Abnormal neural circuit development often translates into prominent neurodevelopmental diseases. Key questions in developmental neuroscience are associated with understanding how these neurons are produced in a precise sequence during embryonic development. This work dissects the properties of neuronal subtypes and reveals novel transcription factors that underlie the genetic program of subgroups. Furthermore, this type of study is essential to unravel the mechanisms fundamental to the function of these diverse neurons.

As the authors have clearly mentioned, this work provides a platform that reveals the molecular diversity at single-cell resolution of the developing spinal cord. This study is a great resource to inform further targeted approaches which promise to enable detailed insight into the development and function of the neural tube.

The authors discuss the results mainly in view of the crosstalk between the morphogen driven gradients and the neural tube progenitors. Would it be also interesting to highlight the crosstalk between the progenitors and the differentiating cells per se? Would the temporal aspect that is revealed in this study suggest a timeline of neuronal subtype generation which would then require birth-dating experiments to support transcriptional data? Is there a pre-requisite of early-born subtypes for the generation of the late-born neuronal subgroups? The crosstalk between cell adhesion molecules and progenitors has not been suggested in this study. Which cellular process in particular would you think it might affect?

Thank you for highlighting our work!

Q1: Would it be also interesting to highlight the crosstalk between the progenitors and the differentiating cells per se?

Yes, absolutely! We believe that our resource may provide a framework to analyse such interactions between progenitors and neurons. Analysing the data, we found multiple known secreted and transmembrane ligands with interesting expression patterns. For example, we found the Wnt ligand Wnt7b to be expressed in late stage progenitors. Previous work in the cortex suggested that Wnt7b controls the timing of gliogenesis by inducing the expression of Notch ligands in neurons, that then signal back to the adjacent neural progenitors to induce gliogenesis (Wang et al., 2016). At the moment it is unclear whether similar principles apply to the spinal cord, however, our resource may provide an entry point for investigating this and similar hypotheses in the future.

Q2: Would the temporal aspect that is revealed in this study suggest a timeline of neuronal subtype generation which would then require birth-dating experiments to support transcriptional data?

One of the predictions made by our resource is the existence of a temporal component to the specification of neuronal subtypes in the spinal cord. As you correctly outlined, this temporal component seems to depend on the sequential induction of specific sets of transcription factors that distinguish neurons, independent of their domain of origin, based on their birth date. We agree that a birth-dating analysis, e.g. by EdU incorporation, would be a logical next step towards experimentally validating this hypothesis.

Q3: Is there a pre-requisite of early-born subtypes for the generation of the late-born neuronal subgroups?

We are very keen to investigate the signals and transcriptional networks that promote developmental progression and may change the competency of neural progenitors to give rise to specific neuronal subtypes in the future. At the moment, it is unclear whether developmental progression to a late neural progenitor that can give rise to late-born neuronal subtypes, depends on specific signals from early born neurons or even the presence of neurons at all. Another exciting possibility is that the switch in neuronal subtypes formed from the progenitors depends on the sequential activation of the ‘gliogenic’ gene expression program that is mediated by first Sox9 and later Nfia/Nfib, which are both also markers for late neuronal subtypes. However, to which extent the activation of this transcriptional cascade depends on the presence of neurons is also not known.

Q4: The crosstalk between cell adhesion molecules and progenitors has not been suggested in this study. Which cellular process in particular would you think it might affect?

Differential gene expression tests between the different neuronal domains revealed multiple cell adhesion molecules with domain specific gene expression patterns. Differential cell adhesion has been previously demonstrated to mediate the clustering of motor neurons into specific motor pools in the spinal cord, and thereby provides the basis for the emergence of the topographic map of the spinal cord that underlies the formation of neuronal circuits (Demireva et al., 2011; Price et al., 2002). Furthermore, our analysis revealed the differential expression of Neurexins and Cerebellins in specific classes of inhibitory and excitatory interneurons. As Neurexins and Cerebellins are important for synapse formation, this may suggest the existence of a molecular adhesion code that may mediate the recognition of excitatory and inhibitory synapses by target neurons, and thus contribute to the establishment of neuronal circuitry in the spinal cord.