Transcription repressor protein ZBTB25 interacts with HDAC1 in macrophages infected with Mycobacterium tuberculosis, and its inhibition leads to autophagy and killing of the intracellular pathogen

Tamoxifen reduces inflammatory infiltration of neutrophils in the airways

This is the first preLight of a three-part series on airway inflammation, infection, autophagy and its mediators. Links to the second and third preLights.

Tuberculosis, an infectious lung disease that affects millions of patients worldwide, is caused by the pathogen Mycobacterium tuberculosis. Unfortunately, despite the prevalent use of various combinations of drugs active against different stages of M. tuberculosis growth, tuberculosis remains an intractable infection globally.

The damage caused by the resulting immunological and inflammatory host response [1], has driven intensive research into host-directed therapies [2,3]. Targeting the host immune system affords two strategies to target tuberculosis: the first involves promoting the clearance of the infection by enhancing the immune system [4], while the second limits organ damage and immune exhaustion by managing inflammation [2].

Previous research showed that intracellular pathogens suppress host immune functions by modulating host chromatin and epigenetic regulators [5]. In fact, M. tuberculosis increases the expression of HDAC1 and decreases the expression of IL-12B, thus reducing host inflammatory responses [6]. In their preprint, Madhavan et al. further probed the mechanism by which M. tuberculosis modulates these two host proteins (Fig. 1). The authors show that manipulation of IL-12B expression by M. tuberculosis promotes pathogen survival by reducing autophagy. This is an important degradation pathway in macrophages to eliminate intracellular M. tuberculosis that we describe in our next preLight. 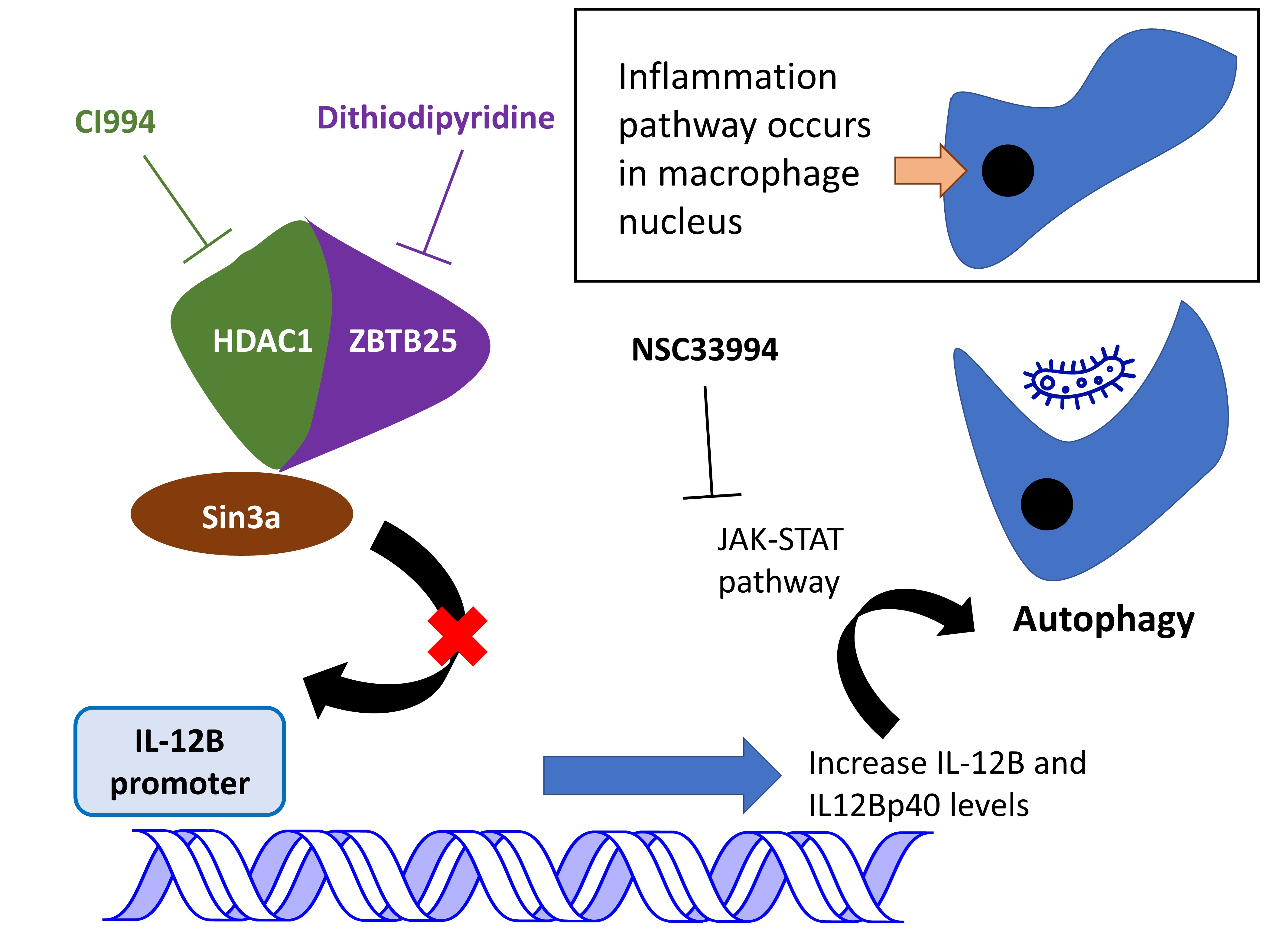 Indeed, the role of respiratory tract inflammation extends beyond infectious diseases to respiratory diseases in general—respiratory tract inflammation caused by neutrophil infiltration has also been implicated in the aetiology of cystic fibrosis and chronic obstructive pulmonary disease. One agent that could be useful in reducing this damaging inflammation is tamoxifen [7], an anticancer drug with non-steroidal anti-inflammatory agent (NSAID) properties [8]. In their preprint, Mansilla et al. used mouse models to evaluate tamoxifen’s potential to reduce neutrophil infiltration of the airways.

The authors found that HDAC1 in macrophages were phosphorylated upon infection by M. tuberculosis; HDAC1 interacted with two macrophage proteins, ZBTB25 and Sin3a. The interaction between HDAC1 and ZBTB25 was characterised using confocal microscopy, which showed that HDAC1 and ZBTB25 co-localise in the nucleus. In silico docking analysis also revealed a strong interaction between HDAC1 and ZBTB25. The authors then showed that ZBTB25 and Sin3a interact with the IL-12B promoter, and used a rescue experiment involving the knockdown of ZBTB25 to reinforce this observation.

Having ascertained that the modulation of ZBTB25 and HDAC1 affect the intracellular survival of M. tuberculosis, Madhavan et al. then investigated how this might be modulated by the effects of two small molecules, dithiodipyridine (ZBTB25 inhibitor) and CI994 (HDAC1 inhibitor). Indeed, the administration of dithiodipyridine and CI994 prevented the recruitment of the HDAC1, ZBTB25, and CI994 to the IL-12B promoter, disrupted the co-localisation of ZBTB25 and HDAC1 in the nucleus, and increased IL-12B expression and IL-12Bp40 levels.

The authors then linked the mechanisms of action of dithiodipyridine and CI994 to autophagy. They looked at three marker proteins involved in autophagy—ATG5, Beclin 1, and LC3—which are suppressed in macrophages infected with M. tuberculosis. Through the restoration of IL-12B expression, the administration of dithiodipyridine and CI994 restored the cells’ autophagy functions. In a separate rescue experiment involving the use of NSC33994, a specific JAK2 inhibitor, the authors showed that the JAK-STAT pathway was involved in the restoration of ATG5, Beclin 1, and LC3 expression. Together these experiments suggest inhibiting M. tuberculosis manipulation of inflammatory and autophagy pathways represent a useful host-directed therapy for tuberculosis treatment.

Mansilla et al. showed that tamoxifen reduces airway neutrophilia in acute lung injury and in chronic muco-obstructive lung disease. In both models, tamoxifen decreased neutrophilia, but did not affect macrophages and lymphocyte numbers. Because tamoxifen blocks ion channels, the authors conducted another experiment to assess its potential role in cystic fibrosis, and found that tamoxifen does not affect anion secretion in mice trachea when applied to the apical side.

Why we selected these preprints

In a previous preLight, one of us (Z.G.) wrote about a preprint by Bigelow et al. on evaluating the toxicity and efficacy of a linezolid-containing antitubercular regimen using a mouse model. In this preLight, we focus on another preprint targeting another aspect of tuberculosis: the host inflammatory responses that drive it.

There is increasing recognition that the immune system plays a key role in mediating the severity of many respiratory infections [9]; many such discoveries have most recently been made in infections caused by SARS-CoV-2 [10]. Similarly, the immune system has also been implicated in tuberculosis [2]. The preprint by Madhavan et al. serves to inform a host-directed strategy in mitigating the effects of tuberculosis infections; indeed, increasing evidence implicates macrophages in the pathology of tuberculosis [11,12]. Madhavan et al. shed some light on the mechanisms involved in these infections. Coupled with the use of other in vitro models [13,14], these findings will guide efforts that aim to attenuate potentially destructive immunological manipulation in tuberculosis.

In keeping with the theme of inflammation, we also selected the preprint by Mansilla et al., in which the authors investigated tamoxifen’s anti-inflammatory effects in the respiratory tract. Their findings that tamoxifen appears to affect only the infiltration of neutrophils, but not the infiltration of macrophages nor lymphocytes, could serve as starting points by which researchers design anti-inflammatory agents to manage respiratory diseases.

Yet, as described in the preprint by Mansilla et al., the immune response to anti-inflammatory agents in vivo is complex. This gives rise to a second issue—the clinical targetability of the immune system in infectious diseases like tuberculosis. Host-directed therapies will need to achieve a fine balance between attenuating the damaging immune response in the lung, and preserving the protective nature of the body’s immune response. Safety, as always, must remain a top priority.