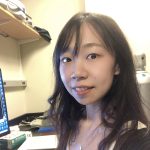 What is this preprint about?

Where different germ layers come from, how they become specified and what tissues they give rise to are classical developmental biology questions that are still being intensively investigated. Moreover, understanding the evolutionary origin of different germ layers and their derivatives have also become a fascinating area of study, which aims to uncover the diversification of animal forms. In this preprint Prummel et al. investigate the origin of a mesodermal lineage – the lateral plate mesoderm. Using a combination of genetic tools and live imaging techniques, the authors identified a small enhancer of the zebrafish-specific gene draculin (drl) that drove the pan-LPM expression profile across evolutionarily remote species. They also identified several upstream transcription factors that could account for this pan-LPM expression profile. These results suggest that the regulatory region of drl can be used as a tool to label a broad array of LPM progenitors in different chordate species.

At post-gastrula stage, the mesoderm is partitioned into three distinct regions, flanking the ectodermal neural tube, and are arrayed in a proximal to distal manner. The most distal region is named lateral plate mesoderm (LPM), known to give rise to the circulatory system, smooth muscle, kidney and the connective tissue anlagen of the limb. Although identities of the derivatives are largely clear, the origin of the LPM, specifically how it arises from initially intermingled mesodermal and endodermal cell populations remains incompletely understood. The authors therefore started by addressing this question.

A key player in this study is the zebrafish-specific gene named draculin(drl). In contrast to many characterized LPM cis-regulatory elements, the upstream 6.5kb regulatory region of drl has been previously reported by the authors to be able to demarcate the entire LPM region, and thus can be a powerful marker to track the LPM progenitors. By comparing the expression profile of drl and an endodermal marker sox17 using single-plane illumination microscopy (SPIM) and panoramic projections, the authors found that at an earlier stage (early gastrula stage), a population of cells display double positivity for drl and sox17 expression. However, such cells disappear after gastrulation. This result indicates that drl also labels endodermal progenitors at the very early stage. This is further confirmed by the 4-OHT-based drl:Cre-LoxP system: the cells that are labeled as early as shield stage are destined to both LPM and endodermal derivatives, whereas cells labeled at later stage (5-6 ss) give rise to LPM derivatives only.  LPM formation however is independent of endoderm specification, as the loss of endoderm does not greatly affect LPM specification. Interestingly, the reversed labeling using sox17:Cre failed to label any mesodermal cells. 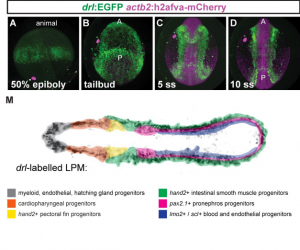 Figure. Expression profile of the EGFP driven by a 6.5kb regulatory region upstream of Drl gene (Drl:EGFP). At early gastrula stage (A), EGFP displays a condensed ring around the marginal region; as embryo develops (B-D) EGFP becomes localized at the periphery of the midline of the embryo.  (M) schematic of the LPM fate territories partitioning during early somitogenesis in zebrafish. Figure adapted from Figure 1 in the preprint.

The unique pan-LPM activity of +6.5Drl raises the possibility of using such an enhancer region to identify components of the LPM regulatory program. By hooking different segments from the enhancer to EGFP reporters, the authors mapped a small region (+2.0drl) that recapitulates drl expression at earlier stages. By using inhibitor treatments antagonising known morphogen molecules, mining the published ChIP-seq datasets and performing gain- and loss-of function experiments against specific candidates, they then identified BMP/Nodal signaling, and the transcription factors EomesA, FoxH1 and MixL1 as upstream inputs for +2.0drl activation. Interestingly, although BMP/Nodal signaling is required for mesendoderm specification, perturbation of EomesA, FoxH1 and MixL1 only mildly affected LPM gene expression. This indicates that these transcription factors might potentiate BMP signaling to drive LPM gene expression, however, other unknown factors could also be involved.

Although the drl gene is zebrafish-specific, the authors found that the +2.0drl EGFP reporter, when introduced into a range of chordate embryos, including chick, axolotl, lamprey, Ciona and amphioxus, still retained the broad LPM expression spectrum. Interestingly, in these chordate embryos +2.0drl also labels endodermal cells, reminiscent of the situation in the zebrafish embryo.

Overall, the results in the preprint identify a regulatory region upstream of the drl gene in the zebrafish as an evolutionarily conserved LPM enhancer, and reveal a partial regulatory network for LPM formation.

Identification of enhancers controlling spatial-temporal expression patterns is often important for lineage tracking and cell fate studies. The traditional way to identify potential functional enhancers is through comparative genomics and thereby finding DNA regions that are conserved across different species. To me this preprint provides an important take home message: the enhancers that are evolutionarily lost can still preserve their function in controlling gene expression patterns and therefore could be used similarly to those enhancers that are conserved.

In addition, I think that the results in this study provoke a series of further questions related to the evolution of the lateral-plate mesoderm and therefore open many new doors.