Cells segregate their duplicated chromosomes during mitosis with each new daughter cell receiving a copy. Many factors co-ordinate this process to prevent faulty genetic information being transmitted to the next generation. In Eukaryotes, Polo-like kinases (PLKs) are key regulators of mitosis, in particular PLK1 (in the fruit fly Drosophila melanogaster PLK1 is known as Polo). Kinases are specialised enzymes capable of phosphorylating other proteins to transmit information and, indeed, Polo has many roles in the cell, including during chromosome segregation, where Polo co-ordinates the movement and maturation of centrosomes. Centrosomes are organelles composed of two centrioles (tube-like structures); a ‘mother’ and ‘daughter’ pair. A daughter centriole arises when the mother centriole duplicates during S-phase of the cell cycle. In G2, the centrioles grow then mature during mitosis when they accumulate a large matrix of pericentriolar material (PCM). During mitosis, the two centrosomes organise bipolar spindle formation for chromosome segregation. Polo localises to centrosomes and the PCM (1) with the help of supporting proteins (‘scaffolds’). Recently Polo was shown to be recruited by Spd-2 which in turn allows the phosphorylation of another protein (Cnn) by Polo. These positive feedback interactions between Cnn, Spd-2 and Polo promote the formation of PCM around the mother centriole needed for centrosome maturation (2). In flies, preventing Spd-2 from recruiting Polo does not prevent Polo localising to mother centrioles meaning other factors can perform this task. Here, in flies, the authors reveal another factor, Ana1, can recruit Polo to support PCM formation during mitosis and centriole elongation.

Polo is recruited to different locations via interactions with its Polo-Box Domain (PBD). The PBD is composed of two Polo box motifs. The PBD recognise the phosphopeptide motif S-S/T on other proteins (3). Using fly embryos expressing Polo fused to Green Fluorescent Protein (Polo::GFP) to monitor Polo localisation, the authors mutated S-S/T to T-S/T motifs on several candidate proteins. The authors injected mRNA coding for each mutated candidate fused to a fluorescent tag (mKate2) and once the mRNA was translated, the candidate protein and Polo were localised by microscopy. The authors found Ana1 (Ana1-S34T-mKate2), in which 34 sites were mutated from S-T, mostly prevented Polo from localising to centrosomes. Ana1 deficiency (ana1-/-) in adult flies is associated with sensory neurons lacking cilia and defective centriole duplication, however this was not the case for mutant Ana1-S34T-GFP adults. In fact, by adding Ana1-S34T-GFP into ana1-/- adults, the authors could rescue the phenotype. Thus, Polo recruitment by Ana1 doesn’t contribute to centriole duplication or cilia formation in adults. They did however observe the majority of adult female flies expressing the Ana1-S34T GFP fusion failed to produce viable young; they discovered this was due to aberrant mitosis and centriole pairs failing to separate in the embryos. 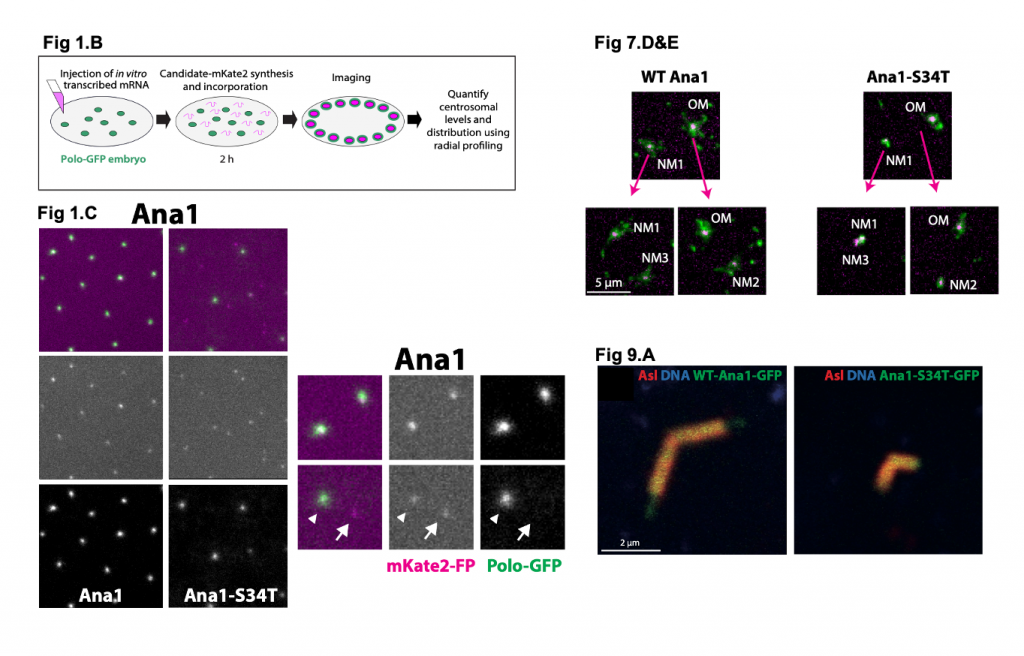 Next, the authors examined the localisation of Ana1 in fly embryos. They quantified GFP signal associated with Ana1-WT and Ana1-S34T finding an asymmetrical distribution at centrosomes, supporting previous observations (4). They observed the ‘older’ mother (OM) centriole had more Ana1 signal than ‘newer’ mothers (NM) which were duplicated during S-phase. This suggests OMs may be able to sequester more Ana1 to centrosomes and that this effect likely wasn’t due to an error during centriole duplication.

Next, the authors asked if Ana1 recruited Polo to the centriole and the PCM. In live embryos, expressing Ana1-S34T fused to mCherry and Polo::GFP proved to be a lethal combination, therefore the authors instead probed for Polo activity using an anti-Cnn-pS567 phosphopeptide antibody in fixed embryos. Cnn is the scaffold factor capable of recruiting in Polo and the Cnn-pS567 antibody detects a Polo kinase specific phosphorylation on Cnn. In WT embryos expressing Ana1-mCherry, Cnn and Cnn-pS567 localised to centrosomes (with Cnn-pS567 towards the centre of the centrioles). In Ana1-S34T-mCherry embryos, reduced amounts of Cnn were observed at centrosomes, with many lacking Cnn-pS567 indicating Polo was is not present in this region to phosphorylate Cnn. These data suggest Ana1 is required for Polo recruitment to this region. As some Cnn-pS567 signal could be detected at centrosomes in Ana1-S34T-mCherry embryos, further investigation revealed the positive feedback loop to build the Spd-2-Cnn-Polo scaffold required for PCM expansion during mitosis could potentially occur in these embryos, but at a much-reduced level. Next, the authors show OM centrioles can recruit more Cnn before they divide but overall less Cnn was recruited in the Ana1-S34T-mCherry embryos. NM centrioles were also found to recruit much less Cnn in general. In all, OMs appear capable of accumulating more Cnn before they divide and even after as well, whereas NMs are unable to do this. This data suggests OMs may accumulate enough Cnn and Spd-2 to support the positive feedback loop needed for PCM expansion whereas NMs may not, which could result in segregation errors and reduced PCM. This may explain aberrant chromosome segregation events seen in embryos if spindle microtubes are unable to attach correctly in centrosomes composed of NMs.

Ana1 has been shown to function during the period of centriole grow in which the microtubules associated with the centriole expand outwards beyond the core centriole region. This mainly occurs during G2 phase of the cell cycle (5). In fly somatic cells, such growth is minimal, however for spermatocyte centrioles, this growth is dramatic. To ask what happens to centrioles if Ana1 cannot recruit Polo, the authors studied fly spermatocyte centrioles finding they were much shorter and some appeared to be less motile in the mutants compared to WT ones, but they were able to duplicate. Like Ana1-S34T mutant females, which largely fail to produce viable offspring, male Ana1-S34T flies also were less fertile, perhaps due to reduced spermatocyte motility.

Centrosome assembly and maturation is a vital process for cellular viability. Over the years, much study into the role of Polo kinases and Polo kinase paralogs in humans and other organisms has revealed the vital functions these factors play. In this paper, the authors use their previous knowledge and build upon their prior conclusions, uncovering another factor, Ana1, which is important for modulating Polo functionality. They also show older mother centrioles can behave differently from younger mothers, indicating differences in the abilities of an experienced centriole to recruit factors needed for centrosome maturity over inexperienced centrioles. This is interesting as it is still unclear as to why older mother centrioles are capable of this activity.

Q1. Regarding your Cnn-pS567 antibody and the phosphorylation still observed in a small number of the Ana1-S34T embryos, is it possible that there is redundancy in this phosphorylation site and another kinase can perform this modification?

Q3. If not due to slow protein degradation, what do you think is the mechanism employed by OMs to by-pass the requirement for Polo to initiate the Spd-2-Cnn feedback loop to grow the PCM during mitosis?

Q1. Regarding your Cnn-pS567 antibody and the phosphorylation still observed in a small number of the Ana1-S34T embryos, is it possible that there is redundancy in this phosphorylation site and another kinase can perform this modification?

A: Yes it could be another kinase, but we think that some Polo should still be recruited to centrioles even in the Ana1-S34T embryos (even though we can’t easily see it), as we’ve shown previously that the centriolar protein Sas-4 gets phosphorylated by Cdk1 (at just a single site) and this appears to recruit Polo.

A: Both Cnn and Spd-2 exhibit very interesting kinetics at embryo centrosomes, as they incorporate into the PCM at the centriole surface and then seem to “flux” outwards, away from the centriole. This turnover is quite slow (it probably takes individual molecules several minutes to move through the PCM), but we don’t detect any “stable” fraction that could stay with the OM centriole (although we would miss it if this fraction was small). However, despite not detecting a stable fraction of individual molecules, generally the presence of a Cnn scaffold helps stabilise the Spd-2 scaffold and Spd-2 recruits Cnn (hence the positive feedback loop). For example, without Cnn the initial recruitment of Spd-2 to the centrosome is the same, but the Spd-2 molecules seem to dissociate from centrosomes much faster. So, although the individual molecules are fluxing, once the OMs are able to accumulate enough Spd-2 and Cnn, the presence of one scaffold at the OM helps maintain the other.

Q3. If not due to slow protein degradation, what do you think is the mechanism employed by OMs to by-pass the requirement for Polo to initiate the Spd-2-Cnn feedback loop to grow the PCM during mitosis?

A: We think that Sas-4 can still recruit some Polo, even when Ana1 can’t. If this is the case, then this small amount of Polo may be able to phosphorylate another centriole protein, Spd-2, to initiate the positive feedback loop that drives centrosome maturation. It doesn’t do this very efficiently, but, once this happens, the positive feedback loop is self-sustaining (although at a lower level) even if Ana1 can’t recruit Polo. OMs bypass the requirement for Ana1-mediated Polo recruitment perhaps by inefficiently accumulating enough phosphorylated Spd-2 which can then directly recruit Polo. In any case, a small amount of Polo would still be very much needed to initiate the feedback loop.