Even et al. look at how vesicles grease their way to faster transport by acetylating the microtubules on which they're travelling 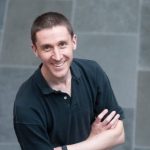 Microtubules are frequently described as a transport network: the railroads of the cell. What has become clear in the last few years is that far from being boring static tracks that the analogy suggests, microtubules are plastic. Of course we knew that microtubules are dynamic at their ends, but what we’re beginning to understand is that each microtubule lattice is deformable and modifiable in all sorts of new and interesting ways.

The focus of the preprint is to look at transport on microtubules in neuronal systems. What the authors discover is that modification of the microtubules (by acetylation) alters transport, and that the modification is driven by the cargo itself.

Even et al. describe that transport on acetylated microtubules is faster. They show using neurons from Atat1 knockout mice (Atat1 is a tubulin acetylase), that transport of lysosomes and mitochondria is impaired. Using knockdown of Atat1 or Atat2 in motor neurons in Drosophila larvae, they also see reduced mobility of vesicles marked with synaptotagmin-GFP. Measurements in either mouse or fly systems reveal that anterograde and retrograde transport is sensitive to microtubule acetylation. The authors can purify tubulin from Atat1 KO mice and in vitro reconstitution of motility using this material also shows reduced transport. The authors could confirm the lack of acetylation and normal amounts of other tubulin modifications. This is important because a weakness of knockout studies in mice is that compensation for the loss of a gene can result in other changes which may conceal – or in this case underlie – a phenotype.

The authors analysed the proteome of a fraction enriched in vesicular membrane and found comparatively more ATAT1. This suggests that ATAT1 could be hitching a ride on vesicles, but how does it get there? It had previously been reported that ATAT1 can interact with the clathrin adaptor AP-2 and, while clathrin and adaptors were also enriched, the ATAT1 found in mouse brain extracts corresponds to isoforms of ATAT1 which lack the AP-2 binding region. This is an important point because the majority of vesicular cargo transported in axons is likely to be uncoated. The authors probed the region of ATAT1 that was required for vesicle binding. Truncation of the C-terminus to a 1-242 fragment or shorter did not bind to vesicles. This experiment doesn’t nail how ATAT1 binds to vesicles but certainly confirms that the short isoforms that are detected in mouse brain are capable of binding vesicular membrane in the absence of an AP-2/clathrin coat.

There’s been a lot of hype around “the tubulin code”, which is the idea that tubulin modifications can alter the properties and behaviour of microtubule-dependent processes. While there have been some clear examples of tubulin modifications altering function (e.g. acetylated microtubules in the mitotic spindle), there are some observations which are more difficult to reconcile. Relevant to this paper, acetylation occurs on the inside of the microtubule. How does the acetylase get in? Why do motors running on the outer surface of the microtubule care about this interior modification?

Very recent work from other groups has shown that there are defects in the microtubule lattice and that these may even result from motors trampling over the microtubule surface (reviewed by Cross, 2019). This preprint converges with those papers: lattice defects might allow acetylase access to the microtubule interior. The idea that vesicles are carrying the means to grease their way to faster transport is very intriguing. This model has a precedent since earlier work (from some of the same authors) suggests that fast axonal transport is powered by glycolysis on-board the vesicle (Zala et al., 2013).

I like papers that reveal new complexity in biological systems. I suppose the fascination is in seeing the breakdown of the simple analogies that were constructed to explain them. Papers like this show that microtubules aren’t the “railroads of the cell”, at least not in the way that railroads in the real world work!

Generally, I liked the multiple approaches used in the paper to tackle the central question. The authors use imaging, proteomics, in vitro assays, two different neuronal transport systems and so on. The work is very comprehensive.

We did not examine whether ATAT1 was present inall cargo subtypes. However, we expect that most moving cargos will indeed benefit from preceding acetylation events on microtubules.

ATAT1 transport seems required for distal acetylation of MTs, but we believe that its release from moving vesicles at multiple places along the MT is followed by ATAT1 intraluminal relocalisation (via an unknown mechanism leading to dynamic opening of the MT lattice) and slow passive diffusion for local MT acetylation.

It is likely that locally released vesicular ATAT1 diffuses through the cytosol into the lumen of neighboring bundled MTs. If this is the case, we assume the existence of an ATAT1 gradient with less acetylation efficiency in neighboring MTs.