Everything is in its right place: how a previously uncharacterized GPCR regulates self-control of trans-Golgi network (TGN) export. 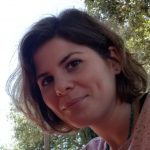 This preLight is written in collaboration with Michael Hanna (@LifeCerealMikey)

Cellular health depends on proper trafficking, modification and sorting of various cargo proteins. Trans-Golgi network (TGN) is the main hub for sorting newly synthesized proteins to their destinations as well as receiving recycled proteins (Bonifacino and Rojas, 2006; De Matteis and Luini, 2008). However, the mechanism by which TGN regulates sorting and trafficking of cargo is still not fully characterized.

Protein and lipid cargoes may be destined for different post-Golgi locations necessitating accurate sorting into carriers from the TGN. Much attention has recently been focused on the signaling mechanisms in place to ensure proper packaging and efflux of post-Golgi carriers. For example, one of the G protein-coupled receptor α subunits, G αo, acts as a regulator of trafficking by activating Rab1/3 at Golgi to promote cargo delivery to the plasma membrane (Solis et al., 2017). Sorting cargo toward the wrong destination may induce an ectopic effect. A such defect is observed in hepatocytes, where mis-sorting of E-cadherin away from the basolateral plasma membrane disrupts hepatic cell polarity (Konopka et al., 2007). However, we lack a clear understanding of the steps and signaling processes maintaining TGN efflux. Based on these observations, Di Martino et al., speculate that other autoregulatory mechanisms at the TGN are in place to ensure proper post-Golgi trafficking.

To test if such and autoregulatory mechanism exists, the authors focus on identifying signaling processes in response to cargoes destined to the basolateral plasma membrane. By utilizing the well characterized and temperature-sensitive cargo, vesicular stomatitis virus (VSVG), they are afforded stringent localization control to the ER, Golgi, or post-Golgi through temperature shifts. To assess if there is a signaling pathway activated in response to the TGN receiving specifically basolateral cargoes, the authors used a comparative phospho-antibody microarray to detect differences when VSVG retained in the ER versus when it is accumulated in the TGN. Their results indicated a significant increase in several signaling pathways, most notably the phosphorylation of protein kinase D (PKD) substrates.

To test if there is specificity of PKD activation, the authors tested if basolateral of apical cargoes trigger PKD phosphorylation and concluded that only basolateral cargoes stuck in the TGN results in PKD phosphorylation and recruitment. Moreover, the authors found that PKD depletion resulted in aberrant accumulation of VSVG cargo in the TGN indicating this kinase as necessary. At rest, the soluble PKD resides in the cytoplasm and upon activation by diacyl glycerol (DAG), undergoes autophosphorylation (Maeda et al., 2001; Matthews et al., 1999). A critical indicator of active PKD signaling is the local DAG production. Consistent with the previous observations, the authors also confirm that basolateral cargo in the TGN resulted in DAG enrichment at the TGN. Importantly, PKD signaling acts downstream DAG, PLCβ3 and Gβγ (Anitei et al., 2017; Díaz Añel, 2007; Sicart et al., 2015). The authors showed that each of these members were necessary for VSVG efflux from the TGN. The authors then reasoned that there may be a sensor at the TGN monitoring the presence of this specific cargo. To test this hypothesis, they immunoprecipitated VSVG when accumulated at varying points along the secretory pathway. Among the interactors, the orphan GPRC5A (The G protein-coupled receptor, class C, group 5, member A) stood out and it has already been shown to localize to the PM, Golgi and post Golgi vesicles (Zhou and Rigoutsos, 2014). Fitting with this data, GPRC5A depletion resulted in decreased PKD activation and PLCβ3 recruitment to the TGN.

As proper cargo trafficking is essential for cell polarity, the authors tested the role of the GPRC5 induced autoregulatory TGN control mechanism during cell polarization. For this purpose, they utilized HepG2 hepatocytes that rely on the coordinated trafficking of multiple cargo proteins from the TGN to undergo polarization (Müsch, 2014). The depletion of GPRC5C (highly expressed in hepatocytes) in HepG2 cells resulted in polarization defects as well as alterations in cargo secretion. Overall, the authors show that GPRC5 mediated PKD signaling pathway is important for mediating TGN cargo load and maintaining cell polarity (Fig 1). 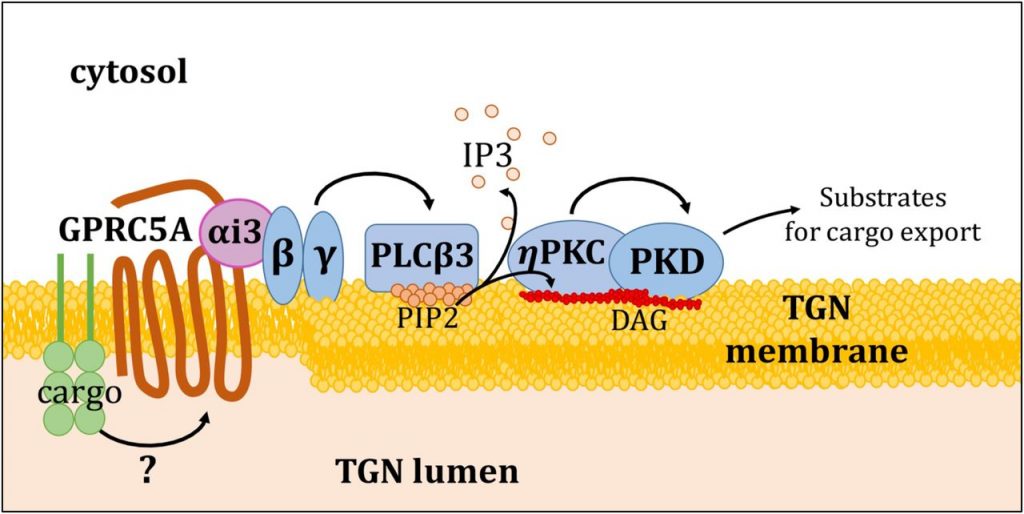 What we liked about this story:

Although we all learn about Golgi-complex as this huge hub for sorting, packaging and delivery of proteins, the regulatory measures that ensure proper Golgi function are not well-known. This story provides evidence of signaling pathways utilized in response to specific cargoes during post-Golgi trafficking. Moreover, the authors show that a previously orphaned GPRC5 family of Golgi receptors sits atop signaling cascade mediating Golgi trafficking. It remains to be seen whether GPRC5 family proteins have additional roles or if there are other proteins that regulate TGN cargo export.