Mitochondria are dynamic tubular organelles that constantly undergo fission and fusion events inside the cell. These dynamics are regulated by specific proteins. For instance, fusion of the mitochondrial outer membrane (OMM) is regulated by mitofusin 1 and mitofusin 2 (MFN1 and MFN2) while fission is mediated by the dynamin-related protein 1 (DRP1). Likewise, fusion of the inner mitochondrial membrane (IMM) is brought about by the dynamin-like GTPase optic atrophy 1 (OPA1)1. Interestingly, how IMM fission occurs remains elusive. Two IMM proteins, namely, MTP18 and S-OPA1 have shown to affect mitochondrial morphology, however, the mechanism through which they induce mitochondrial fission is not well understood2. Spier et al. address this question by looking at the evolutionary past of mitochondria for clues.

Today, it is widely accepted that mitochondria do not form de novo and evolved from a proteobacterial lineage3. It has been shown that some of these proteobacteria possess inner membrane invaginations similar to what is seen in mitochondrial cristae. Several unicellular eukaryotes have a mitochondrial FtsZ4 , however, the division machinery of mitochondria in metazoan or fungal cells involving DRP1 is not like what is observed in bacteria involving the Z-ring forming protein, FtsZ5,6. This suggests that there is no evolutionary conservation of the division machinery between the bacteria and mitochondria of opisthokonts (fungi and metazoan). To test whether human mitochondria have completely lost their ancestral bacterial division machinery, Spier et al. introduced a human codon-optimized version of FtsZ (mt-αFTsZ) with the ability to be targeted to mitochondria inside human cells. Interestingly, the authors found that not only did the mt-αFTsZ protein localize to the mitochondrial matrix before DRP1 bound to the OMM, but mt-αFTsZ also increased mitochondrial fission events in the cell. The authors’ findings led to the discovery of novel proteins that associate with mt-αFtsZ, suggesting the presence of a unique IMM fission machinery.

2. mt-αFtsZ localizes to mitochondrial matrix constructions before DRP1 is recruited to the OMM

3. mt-αFtsZ localization to the IMM is independent of the replication of the mitochondrial nucleoid 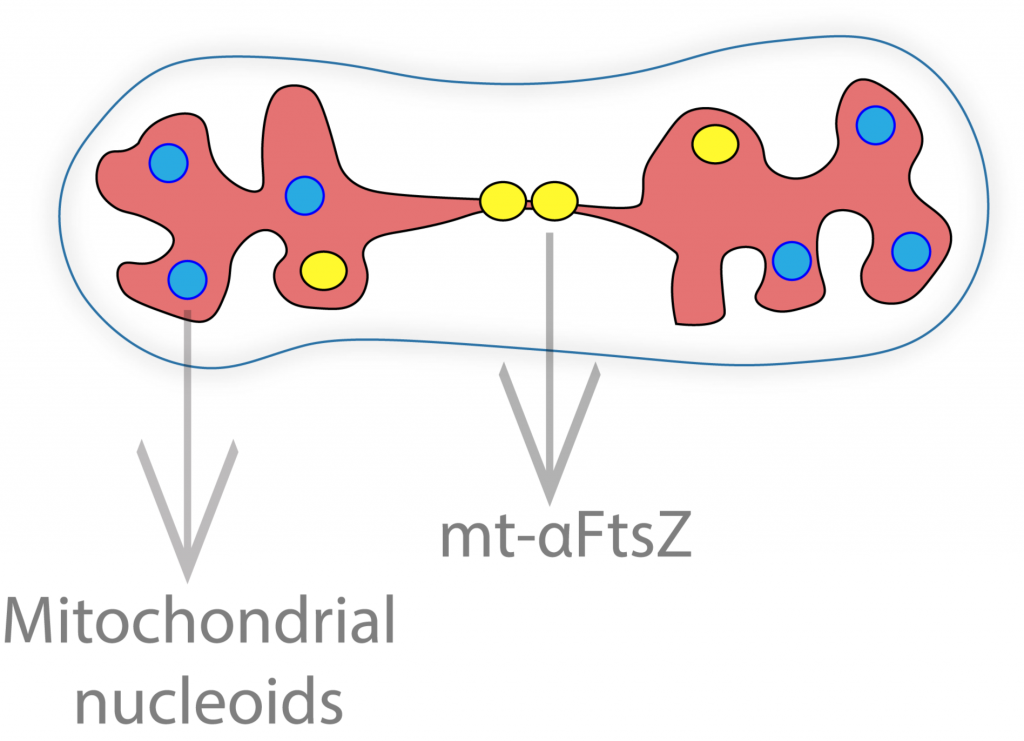 The authors found that the mt-αFtsZ punctae and the mitochondrial nucleoids, for the most part, do not co-localize with each other. To test whether the small co-localizing subset contained replicating nucleoids, the authors labeled actively replicating mtDNAs and found that they also do not colocalize with mt-αFtsZ punctae.  Upon inhibiting mtDNA replication using dideoxycytosine (ddC), the nucleoid packing protein localized to the entire matrix instead of just the nucleoids. However, in the presence of ddC, the localization of mt-αFtsZ was unaffected suggesting that mt-αFtsZ localization is independent of nucleoid replication. 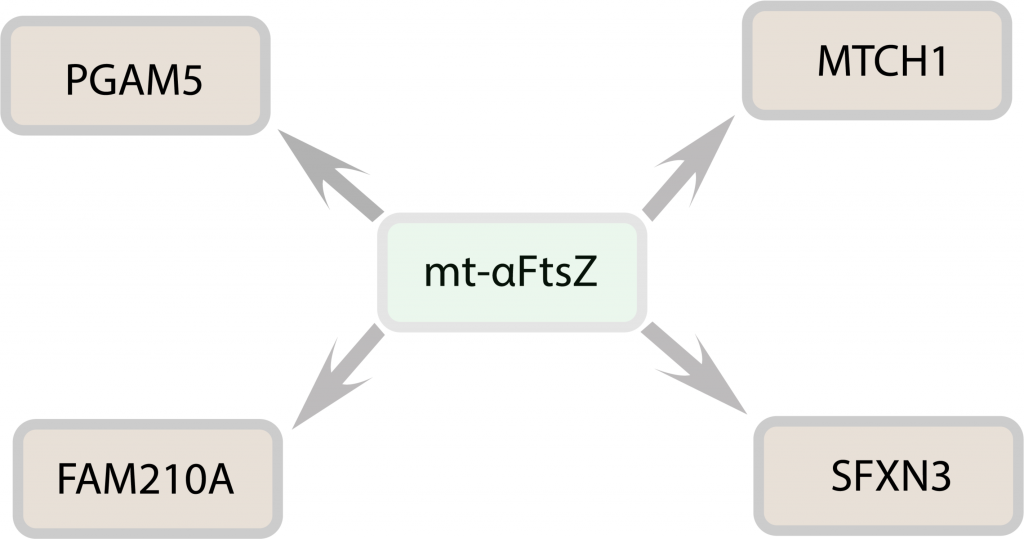 A) Were these proteins identified as interacting partners of mt-αFtsZ?

MTP18 was identified and is mentioned in the preprint as  MTFP1 (its other name). We did not identify Opa1.

B) Do you think that S-OPA1 and MTP18 could also be involved in the IMM fission machinery that you have described?

2. You show that the expression of mt-αFtsZ induces mitochondrial fragmentation and you also show that mt-αFtsZ action precedes that of DRP1. Given that individually silencing the four effectors of IMM fission did not affect mitochondrial morphology, do you think the IMM machinery is essential for DRP1 mediated mitochondrial fission?