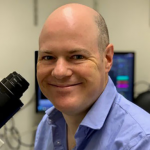 Caveolae, or “little caves”, are roughly 80 nm cup shaped invaginations of the plasma membrane. They are formed by association of the integral membrane caveolins and peripheral cavins. Though initially enigmatic, they are now believed to function as hubs for signal transduction and clathrin-independent endocytosis, as well as mechano-protective membrane reservoirs. Caveolae are known to be enriched in the major plasma membrane lipid cholesterol, and both caveolins and cavins possess specific lipid binding properties. Yet how these proteins affect the overall lipid composition of the membrane where they assemble has not been determined.

Zhou and colleagues took MCF-7 breast cancer cells, normally devoid of caveolae, and showed that co-expression of caveolins and cavins was sufficient to generate caveolae, whereas the individual components would localize to the membrane but not form the characteristic cup-shaped invaginations. Nonetheless, they could take cells expressing these proteins (or their mutants) and “unroof” them to determine the lateral distribution of specific lipid molecules in proximity to the individual proteins or whole caveolae using specific lipid biosensors and immunogold labelling, respectively.

It turns out that cavoelae are not just enriched in cholesterol, but also anionic lipids PS, PI(4,5)P2 and PA. Caveolin-1 alone could enrich cholesterol and PS, whereas cavin-1 could enrich PI(4,5)P2 and PA. Analysis of mutants combined with molecular dynamics simulations revealed the HR1 domain from cavin-1 as the protein region responsible for sequestering PI(4,5)P2. Crucially, there seemed to be cooperativity for lipid recruitment; for example, mutant HR1 caveolae do not enrich PI(4,5)P2 as expected, but also fail to enrich cholesterol. So it appears that an unexpected higher order organization emerges between the two proteins and multiple lipid types.

Experiments with PS-deficient cells also revealed that caveolae enrich PS lipids with acyl chain compositions that prefer curved bilayers (i.e. both unsaturated or both saturated, not mixed) – so there is capacity to sort lipids based on acyl chain, as well as by head group. Another crucial finding is that the sequestration of PI(4,5)P2 occurs via electrostatic interactions of up to 11 lipids, meaning the lipids are not completely shielded by cavin-1 and could conceivably be recognized by non caveolar proteins.

Heterogeneity of lipids has long been posited as a way to generate domains or platforms that can recruit selected proteins and execute specific cellular functions. However, physiological mechanisms for achieving this on the inner leaflet of the plasma membrane are not clear. This paper struck me because it shows how a specific protein structure organizes lipids. The obvious question is: to what end? Of course, the specific enrichment of anionic lipids, acyl chains and cholesterol could reflect the ionic and curvature-generating lipid properties needed to assemble cavin and caveolins at membranes. But there are more intriguing possibilities, as raised by Zhou and colleagues: the high degree of lipid enrichment and polyvalent nature of the interactions raises the possibility that the local enrichment could be sensed by other, non-caveolar proteins. In effect, the caveolae could act as hubs where lipid-dependent signals originate. Secondly, given the high degree of sequestration, disassembly of caveolae could release a large fraction of signaling lipids like PIP2, perhaps generating a signal in its own right.

Is the high degree of lipid sequestration sufficient to drive formation of a higher juxta-caveolar concentration of lipid to activate low-affinty lipid-regulated processes, given the rapid diffusion of free lipids?

What total fraction of plasma membrane anionic lipids like PIP2 and PS would you estimate could be sequestered by caveolae (and therefore released upon disassembly)?