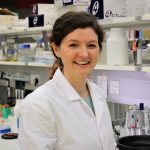 CRISPR/Cas9 has revolutionised our ability to functionally annotate the human genome. Transfecting cells with pooled libraries of single gRNAs provides a powerful tool to assess the genotype-phenotype relationship on a large-scale. However, this process is limited by our ability to select and enrich the phenotype of interest in a high-throughput manner. Many phenotypes are visible only by microscopic evaluation. Previous studies have expanded the scope for microscopy-based screens, however they have intrinsic technical limits in scalability (1-6). The authors of these preprints develop automated approaches to facilitate fast and scalable imaging-based pooled CRISPR screens.

Phenotypes are traditionally selected in CRISPR screens through viability, growth rates, chemical selection or FACS sorting. In order to enrich cells based on a morphological feature, the phenotype must be associated with a selectable readout. The ‘optical enrichment’ process presented in these preprints relies on the ability to mark cells displaying a CRISPR-induced phenotype by photo-conversion.

Prior to transfection with the pooled sgRNA library, an immortalised retinal pigment epithelial cell line was engineered to express a photo-activatable form of the fluorescent protein mCherry via lentiviral infection. Cells with the phenotype of interest, as observed by microscopy, were identified by automated image analysis and photo-converted into mCherry positive cells by exposure to blue light. This was achieved using a digital micromirror device (DMD), a device that can be introduced into the light path of common commercial microscopes. This process was automated by developing a plugin called Auto-PhotoConverter for the open source microscope control software μManager. The specificity of photo-conversion was tested using a pool of cells positive and negative for the fluorescent protein mIFP – this found photo-conversion to be reliably specific, irrespective of the percentage of ‘hits’ or cells marked for photo-activation.

The photo-activated, mCherry positive cells could then be selected by FACS. By varying the photo-conversion time, the authors also found that cells with different phenotypes could be marked with different mCherry intensities, and as such, isolated into different groups. Traditionally, high-throughput sequencing would be used to examine the sgRNA abundance relative to the whole cell population. However, the authors were able to mark and isolate ‘true negative’ cells (absent of both mCherry and mIFP expression) using a different photo-conversion time. Comparison of sgRNA enrichment to this population improved the identification of the ‘true positive’ phenotype. This optimised method was used to screen a pool of over 6000 sgRNAs targeting over 500 genes for their effects on nuclear size, with ~1.5 million individual cells able to be screened in 8 hours. 14/15 of the identified hits were further validated to exhibit larger nuclei after knock down. 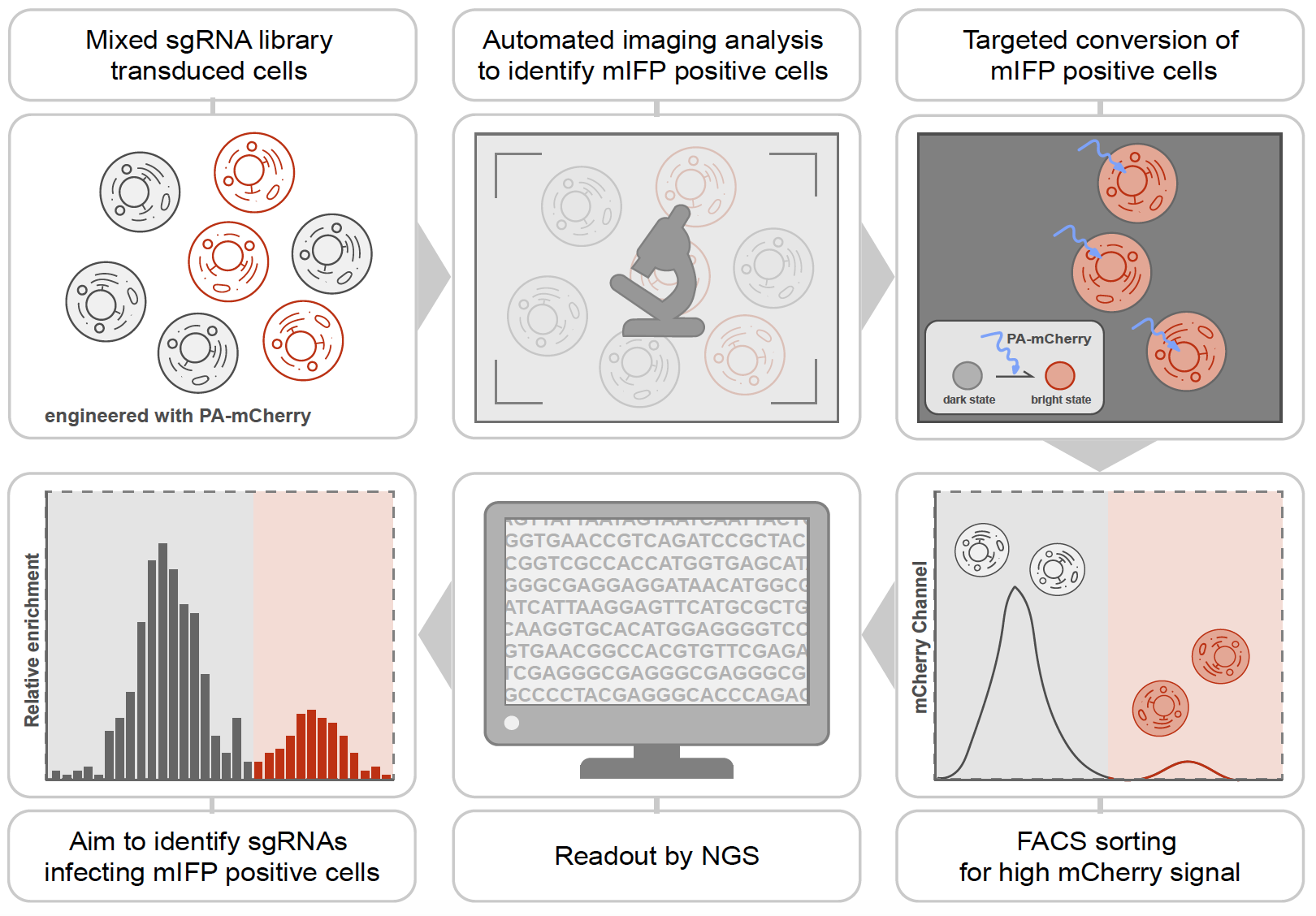 Schematic of Optical Enrichment imaging-based pooled CRISPR screen. Figure 1a of this preprint made available under a CC-BY 4.0 International license.

In this preprint, Kafner et al present a complementary method – Artificial Intelligence-Photoswitchable Screening (AI-PS) – to identify subcellular image phenotypes in pooled genetic screens. Similarly to Yan et al, this method involves labelling phenotypically selected cells by photo-activation of a fluorescent protein, subsequent FACS sorting and sgRNA sequencing. However, the methods differ in their initial identification of cells for photo-conversion; the AI-PS platform implements machine learning and deep learning algorithms to perform image capture, segmentation, selection based on a pre-trained classification model and photo-activation of regions of interest. This enables screening of ~ one million cells within 12 hours. Proof-of-concept screens were performed in U2OS osteosarcoma cells to assess two cases of subcellular protein localisation: i) PINK1-dependent Parkin translocation to mitochondria, and ii) nuclear localisation of the transcription factor, TFEB, in response to starvation. In addition to detecting alterations in protein localisation, the authors suggest this approach can be adapted to identify genes regulating organelle abundance, size and shape.

Schematic of the AI-PS platform. Figure 3a of this preprint made available under a CC-BY-NC-ND 4.0 International license.

What I liked about these preprints:

CRISPR-based genetic screens are widely used in many fields to relate genotype and phenotype. These preprints caught my attention in providing new tools to enrich previously unselectable phenotypes. I also found it interesting that different cell ‘types’ can be marked for FACS sorting, either by varying the photo-conversion time or expressing additional photoactivatable-fluorescent proteins per cell. While Yan et al’s approach requires developing an analysis code for each phenotype of interest, the authors state this could be overcome by implementing image analysis strategies such as deep learning, an approach adopted by Kanfer et al in developing AI-PS. The high-throughput image analysis methods presented by these authors can be adapted for different microscope systems and phenotypes of interest, thus broadening the range of cellular and subcellular phenotypes that can be assessed by pooled CRISPR screens.

Thanks for your detailed summary and great questions!

To address your question:

Thanks again for your interest in our work and your questions!