All aboard! IFT trains assemble in a sequential manner at the ciliary base prior to entry

Cilia are microtubule-based antenna-like organelles that extend out from the surface of the cell. Here they detect biochemical and mechanical cues and, in the case of motile cilia, beat to provide motility. The main structural component of a cilium is the axoneme; a cylindrical array of 9 microtubule doublets which extends from the triplet microtubules of the mother centriole to form a protrusion. This structure is enveloped by a specialised domain of the plasma membrane, the ciliary membrane, which wraps around the microtubules and anchors to the mother centriole at the base of the cilium. This anchorage point forms the transition zone, which is a selective gate formed of multiple protein complexes that controls the entry of proteins and lipids into the cilium.

The transition zone is vital for maintaining a compartment with a molecular identity distinct from that of the cytosol or plasma membrane. Its presence, however, poses a problem for proteins with a legitimate need to access the ciliary space. The exact mechanism of transition zone selectivity and function remains elusive, however one way to pass through is to hitch a ride on an intraflagellar transport (IFT) train. These trains are composed of long linear arrays of IFT particles which use the axoneme as a track to transport cargo into and out of the cilium. There are two types of IFT particle, IFTA and IFTB, which are themselves multi-subunit assemblies. Anterograde transport towards the ciliary tip is mediated by IFTB particles, which recruit the microtubule motor kinesin-2, whilst retrograde transport is mediated by IFTA particles and the dynein-2 (dynein-1b in Chlamydomonas reinhardtii) motor.

Whilst a lot is known about the structure of the assembled IFT train and its dynamics on the axoneme, the mechanisms of assembly, loading and unloading of trains remain enigmatic. The area around the ciliary base is a crowded place with centriolar and ciliary proteins all vying for space. Copious studies show that ciliary cargo, motors and IFT proteins all accumulate here waiting for their ticket through the gate. How then is order derived from this chaos to regulate ciliary entry? In this preprint, van den Hoek et al. make a big step towards understanding this process using cryo-electron tomography (ET) and expansion microscopy to visualise IFT train assembly.

In this study, the authors use the model organism Chlamydomonas reinhardtii, which has a readily accessible flagellum (motile cilium), to investigate IFT assembly at the ciliary base. First, they look at the structure of the transition zone itself using cryo-ET and subtomogram averaging. Y-links are known to be a key structure within the transition zone, sitting between the axoneme and ciliary membrane. In this study, the authors show that membrane binding is not a pre-requisite for Y-link formation. Stellate fibres are also apparent, forming a cross-sectional 9-pointed star within the lumen of the axoneme. Distal to these structures a previously unseen helical ‘sleeve’ was observed decorating the microtubules, which the authors predict might designate sites of axoneme severing.

Intriguingly, filamentous strings of particles were also observed. These were tethered to the transition zone at one end, with the other end extending into the cytosol. Comparison with previous structures of mature axonemal trains confirmed that these strings were assembling IFT trains. Assembling trains were more flexible than their mature axonemal counterparts and contained an extra density on IFTB near the kinesin-2 binding site of unknown identity.

Comparison of the spatial arrangement of the various IFT components revealed that trains are assembled in a sequential manner. The most complete regions of the train are adjacent to the transition zone, then as it extends into the cytosol, first the dynein-1b and then the IFTA densities are missing. This suggests the IFTB backbone is built first, followed by IFTA and then dynein-2 recruitment. Kinesin-2 is relatively small and flexible and so could not be identified by cryo-ET. Instead, the authors use expansion microscopy to show that this is the final component recruited. 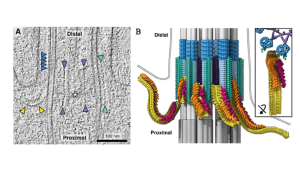 I chose this preprint because it beautifully visualises the mysterious early stages of IFT train assembly. The events occurring at the basal body prior to cilium entry are essential in regulating cilium behaviour, both when it comes to building its structure and in determining its signalling capabilities, yet we know so little about them. Elucidating the mechanism of IFT train assembly helps shed light on how IFT is regulated to balance trafficking and ensure that only functional trains can take up valuable space on the axonemal highway. It is also a key step towards unravelling how the transition zone can function as a selective gate. The importance of all of these processes is evidenced by the devastating consequences of mutations in genes encoding IFT and transition zone proteins, which lead to a set of pleiotropic diseases termed ‘ciliopathies’.

One of the outstanding questions that comes to mind is how IFT trains can pass through the transition zone given their size. Did you see any relaxing or restructuring of the transition zone proteins at the points of train entry that would permit their passing? Or alternatively can you tell from their alignment and relative size if they could pass between structures such as the Y-links?

Interesting question! We did not observe evidence for transition zone relaxation. As seen in the raw tomogram slice in Fig. 1A (left image in this preLight), there is sufficient space between the microtubules and the membrane for IFT trains to pass through the transition zone. The Fig. 2A composite structure of a transition zone with bound IFT trains (right image in this preLight) shows how the trains run along the transition zone by tracking between the Y-links of two neighboring doublet microtubules. Furthermore, Fig. 3A-B shows the assembly state and position of every train in our dataset relative to the transition zone. We observed the front ends of many trains bound along the Y-links, but only a couple further distal along the MTD sleeve. As we estimate that each assembling train stays at the ciliary base for ~9 seconds prior to entry (see Discussion), we interpret this to mean that the sleeve is the point of no return, where a train will continue traveling into the cilium.

It would be difficult to determine from structural studies, but has your work thrown up any clues as to how IFT train length could be regulated during this assembly process?

IFT train length is a topic that Gaia Pigino and I have been thinking about for a long time. Will Ludington and Wallace Marshall observed that the size of an IFT train is correlated with the amount of time it spends at the ciliary base (Ludington et al., 2013; https://doi.org/10.1073/pnas.1217354110). Our cryo-ET measurements show that both assembling and mature trains have a continuum of lengths (Fig. 3A and C), which is consistent with the idea of a relatively constant rate of IFT assembly at the base combined with stochastic entry into the cilium. However, this is speculative, and the precise molecular mechanisms that regulate IFT assembly and entry require further study. In my first paper as a student in the Marshall Lab, Will and I found that IFT trains are larger during the early stages of ciliary regrowth following pH-shock abscission (Engel et al., 2009; https://doi.org/10.1083/jcb.200812084). It would be very interesting to examine assembling IFT trains under these conditions, but we would need much better targeting of the ciliary base by cryo-FIB milling, as the modest cryo-ET dataset in this paper already took over 5 years to collect.

Did you see any evidence of disassembling trains and is this something you could look at in the future?

We haven’t spotted disassembling retrograde trains. We interpret this to mean that trains are rapidly disassembled at the ciliary base, similar to the rapid remodelling that occurs at the ciliary tip. We cannot say whether retrograde trains are disassembled before or after passing the MTD sleeve, but this microtubule decoration could potentially stop retrograde transport or detach the dynein motors. The reason we can see the assembling anterograde trains is that they hang around for several seconds before entry, and indeed every doublet microtubule of the transition zone is bound by an assembling train (see Fig. 4D-E).