All cells need to asymmetrically divide is a clustered Par complex 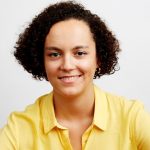 Asymmetric division of stem cells allows the formation of cells with different fates: one daughter cell begins to differentiate towards a cell type, whilst the other maintains stem cell identity. The Par complex, discovered in C.elegans and composed of Par3, Par6 and atypical protein kinase C (aPKC), is crucial for the polarisation of cells as it determine the localisation of other polarity proteins and fate determinants (Suzuki & Ohno 2006).

In flies, mechanisms regulating asymmetric division have been extensively studied and are now well known (Knoblich 2008, Knoblich 2010). However, some events during asymmetric division remain elusive, such as symmetry breaking and the cues that trigger the formation of the Par complex. Studies so far are either restricted to flies or limited to single-cell levels (using optogenetics) (Johnston et al 2009, Kono et al 2019, Okumura et al 2018).

In this exciting preprint, the authors use a recently developed in vitro reconstitution assay, which drives the clustering of any protein at the cortex of unpolarised cells. They used this assay to test the ability of wild-type or mutant versions of individual members of the Par complex to i) assemble the entire Par complex and ii) to drive asymmetric cell division in cells that normally divide symmetrically.

In this study, the authors used a system developed by the lab (Ben-Sasson et al 2021) which allowed them to direct cortical or membranous proteins to spontaneously cluster at the cortex forming caps. Here, the authors chose to study the role of the Par complex and found that inducing the formation of a Par complex cap was sufficient to induce the hallmarks of asymmetric cell division, namely spindle orientation, central spindle asymmetry and the asymmetric segregation of cortical components. Thus, they were able to induce asymmetry in unpolarised cells.

The assembly of the Par complex

First, the authors showed that clustering of any of the Par complex components results in the recruitment of the two other components of the complex at the cortex. Importantly, the lab found that Par6 autoinhibition is the rate-limiting step of the complex assembly. For this, truncated versions of Par6 were expressed in their system, one containing the aPKC binding domain and the other containing the Par3 binding domain. The first construct was able to recruit aPKC faster than the full- length Par6 which shows that Par6 auto-inhibition slows the formation of the Par complex. In addition, the mitochondria-targeted Par6-aPKC binding domain construct was able to recruit cytosolic GFP-Par6-Par3-binding domain construct to the mitochondria and conversely.

These results bring an explanation to a long-standing question in the field, regarding how the Par complex can form despite aPKC inhibitory phosphorylation on Par3 and Par6 inhibition of aPKC kinase activity. Here, the authors showed that the kinase activity of aPKC is mostly dispensable for the assembly of the complex.

Specific roles for each of the Par component

Second, the authors demonstrated that spindle orientation and central spindle asymmetry are controlled via two different pathways. On one hand, Par3 is involved in spindle orientation via mInsc/LGN, complex that, together with NuMA, links the Par complex to microtubules. On the other hand, the kinase activity of aPKC is necessary for symmetry breaking of the central spindle.

Overall, the study concludes that, surprisingly, mouse cells can reproduce several of the hallmarks of asymmetric division that have previously been described in fly: all they need is a Par complex component to cluster. 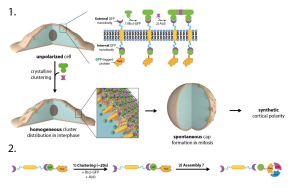 Method developed using protein design (adapted from Figures 1 and 2). 1. The cells stably express GBP-TM-GBP and the protein of interest fused to GFP. They are then incubated with B(c)GFP and A(d) which trigger clustering. In mitosis, arrays are restricted to one side, and this form an asymmetric cortical cap. 2. Par components, or part of them or mutant versions were fused to GFP and clustered, then the authors looked at the dynamic of the Par complex.

They now have a tool to study various mechanisms of asymmetric cell division, such as symmetry breaking, the formation and maintenance of other polarity caps, the establishment of central spindle asymmetry but also the cell size asymmetry and the role of cortical tension in division.

Given the adaptability of the system, there are many directions in which future research could go. There is still more to discover about the Par complex: what is/are the symmetry-breaking event(s)? What triggers the clustering of one Par component leading to the formation of the complex in the first place? Or on the contrary what prevents the formation of the Par caps in symmetrically dividing cells?

What are the mechanisms restricting caps formation to mitosis? It is suggested that caps are formed by increased tension at the cortex or that the caps have a high affinity for zones with high cortical tension. If so, how is Par complex established and/or maintained in interphase in epithelial cells for example?

This is something we are currently investigating. We previously established that the diffusion rate of arrays within the membrane is very low (Ben-Sasson et al 2021), most likely because their density increases quickly as they grow. Combined with the fact that the cortex of interphase cells is compartmentalized, in particular through the actin cytoskeleton, we think that the arrays do not have the required mobility to coalesce in interphase cells. The massive cortex and membrane remodelling happening in mitosis must somehow allow this.

Our system cannot obviously be used to address how epithelial cells cluster their Par complex (because clustering is artificial in our case, it can only address what is happening downstream). But previous elegant work in numerous systems have established that the Par complex clusters at cell-cell junctions (mostly via Par3). Our system has, however, allowed us to systematically characterize the contribution and kinetics of this clustering to Par complex assembly.

How do the authors explain that the different cluster at the cortex assembles into a single large cap in mitosis and not multiple caps spread all over the cortex? Is the location of the cap random?

The physics of the process is unknown. We have a correlation between array localisation and high tension/lipid order. This might suggest that array coalescence is driven by line tension (energy minimisation like oil droplets in water), but this remains to be demonstrated. As far as we can say, the localization of the cap is not predetermined.

Would it be possible to adapt the system to form two caps?

This is an excellent question. At the moment, we can target different proteins to the same cap, but we don’t know how to make two different, non-overlapping caps. If our hypothesis that cap formation is driven by some modification of the membrane properties by the arrays, then one would think that coexpressing different transmembrane domains (the current single pass, and a bulkier multi pass for instance) might result in two different caps.

Would it be possible to change the size of the cap?

This being said, in this preprint, we did not want cap size to be a variable, so we rigorously controlled the expression level of the transmembrane segment to keep its surface density identical between cell lines. Thus, cap size is remarkably homogenous within the cell population, but also between cell populations expressing different Par complex subunits for instance.