The eukaryotic genome is folded in a highly organised and complex way within the nucleus; how it is folded can influence several processes including gene expression. Using chromatin conformation capture (Hi-C), chromosomes were shown to be organised into topological associated domains (TADs) reflecting DNA regions which prefer to interact with each other (intradomain) (1). These TADs are thought to form through the actions of a macromolecular holocomplex called the structural maintenance of chromosomes (SMC) cohesin complex (SMC1-SMC3-SCC1; 2,3) and its interactions with the CCCTC-binding factor (CTCF), which is located at TAD boundaries. The movement of SMC along the chromatin pulls DNA into a ‘loop’ which stops growing when the complex dissociates or reaches convergent CTCF sites at boundary regions; this model is currently known as ‘loop extrusion’ and has been shown to regulate gene expression by allowing distant genes to interact with each other within TADs (4,5). However, the genomic landscape however is not sparse, with numerous factors occupying and interacting with the chromatin, all of which could prevent loop extrusion machinery movement. How cells may deal with these possible conflicts is largely unknown nor is how chromatin occupying factors may influence the structure of the genome. One such macromolecular complex is the mini-chromosome maintenance (MCM) complex. MCM is loaded onto DNA, facilitated by the loading protein Cdt1 (6), at origins of replication by the origin recognition complex (ORC) during late mitosis and G1 phase, becoming activated during S-phase to drive DNA replication. Here, the authors ask if MCM complexes can alter DNA ‘loop’ extrusion and affect genome structure in germline and somatic cells.

The authors investigated genome architecture during the transition between oocytes to zygotes (OZT) in cells deficient for the loading of MCM onto the DNA. During this transition, ooctyes are fertilised to become a one-cell zygote. ‘MCM loss’ zygotes were generated by preventing the factor geminin from being degraded as the presence of geminin stops Cdt1 directed loading of MCM during G1 phase (6).

Using single nucleus Hi-C (snHi-C; 7), a modified form of Hi-C, the authors examined loop formation and TAD boundaries in chromatin extracted from maternal and paternal pronuclei from control and ‘MCM loss’ cells. By looking at peaks and TADs associated with previously known co-ordinates of CTCF-bound regions (i.e loop forming regions), the authors show that MCM loss results in increased peaks at these co-ordinates correlating with increased intermediate and longer-range interactions being detected suggesting loss of MCM affects CTCF-bound regions and TAD boundaries. They confirm this affect is dependent upon the activities of cohesin. 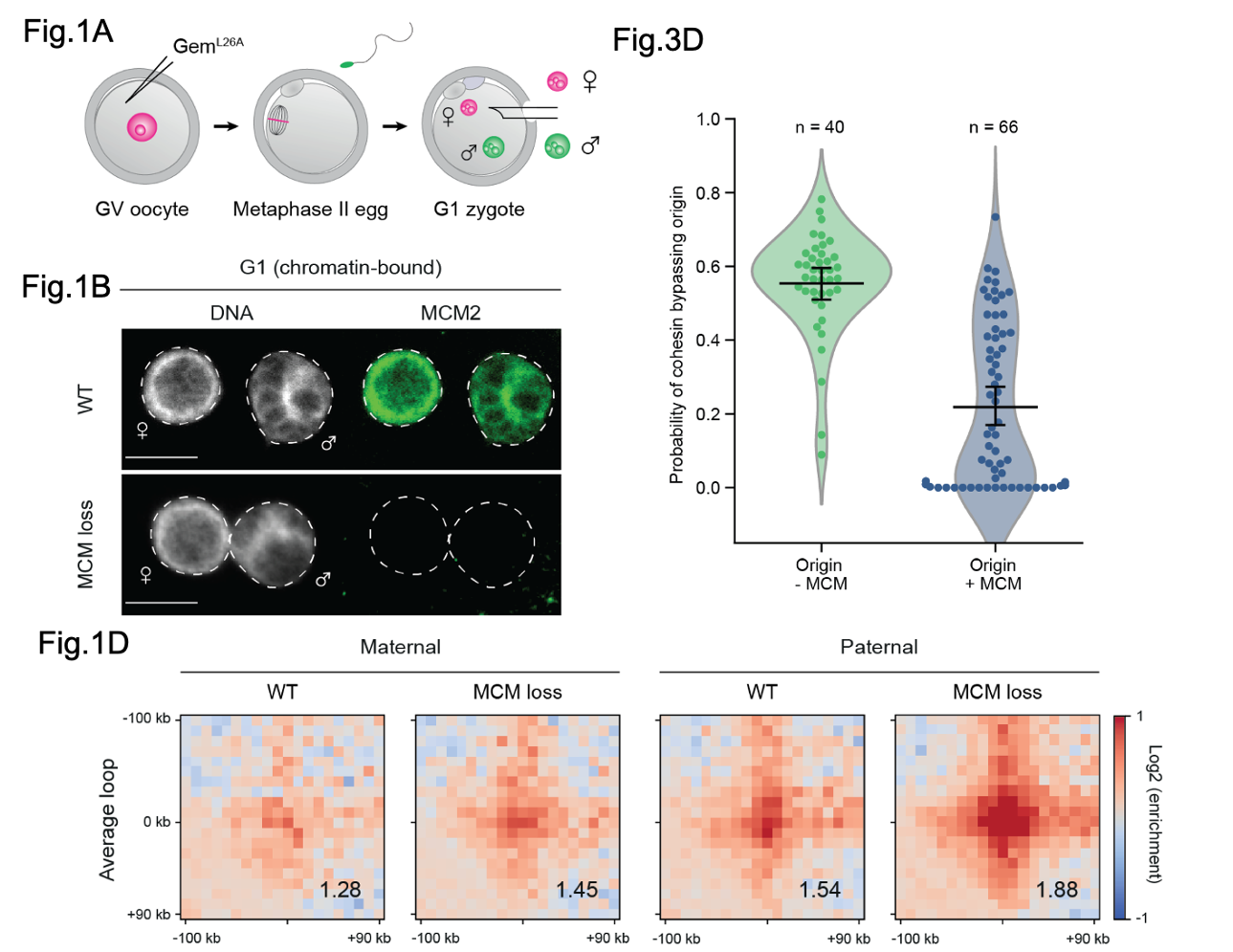 Figure shows selected data from Dequeker et al. Fig1A. shows a schematic diagram of the approach the authors used to prevent MCM loading onto the chromatin. Fig1B. shows representative images of MCM localisation in MCM positive and MCM negative nuclei. Fig1D. shows the average loops and TADs for control and MCM loss nuclei. Fig3D. Graph shows the probability of cohesin moving past MCM at an origin in control and MCM loss cells. Figures extracted from Dequeker et al. 2020 and modified under a CC-BY-NC 4.o international license.

Loss of MCM was not associated with changes to the size of DNA loops but their analysis suggests it does alter CTCF-bound regions. Therefore, the authors reasoned that if MCM affected CTCF directed loop formation, the increased peak strength from MCM loss cells around these regions could be due to MCM affecting how CTCF establishes these regions and how the TAD boundaries are insulated from one and other. By deleting CTCF in ‘MCM loss’ cells, the insulation (i.e the separation between one boundary and the next) between TAD boundaries was weaker than in CTCF depleted control cells suggesting MCM can act as a barrier to the formation of these regions however, MCM did not affect TAD boundary establishment, which is entirely lost in CTCF- depleted cells and not re-gained when MCM is also lost. These effects are unlikely due to MCM being involved in the release of cohesin from the chromatin and instead, supports the actions of MCM as a random barrier to loop extrusion.

To ask if the effect of MCM loss on loops and TADs could occur in somatic (non-germline) cells, the authors degraded MCM using an inducible degradation system in HCT116 cells (human colon cancer cells) and collected cells after synchronisation in G1 phase and following MCM degradation. Using bulk Hi-C, they show similar peak patterns to zygote cells, albeit more subtle. Though more work is needed to investigate this, transcriptional changes in these MCM degraded cells suggest that the barrier like properties of MCM could affect gene expression.

Next, the authors directly investigated if MCM could interact with cohesin on the chromatin. Here, the authors use total internal reflection fluorescence microscopy (TIRFM), which is a high-resolution microscopy technique in which a thin layer of the sample is excited on the surface only exciting surface fluorophores. This means other (deeper) fluorophores are not excited which improves background noise. Here, the authors perform an in vitro assay in which DNA containing an origin region was spread on a slide and purified licensing factors added to the DNA to allow MCM to become loaded at the origin. After these were washed off, they flow cohesin over this DNA strand and track its movements revealing cohesin can pass MCM bound regions, but it was 3x less frequent, with some failing to traverse entirely. They also noted that both single and (predominantly) double hexamers of MCM could interfere with cohesin movement and supporting MCM as random barrier, which can be overcome in some cases. Using quantitative modelling, they support their in vitro and in vivo findings additionally revealing that barrier location could also influence extruded DNA loops, i.e if barriers are far away from each other or can be passed, then the size of the DNA loop is likely to be unaffected, perhaps explaining why MCM loss does not affect DNA loop size.

I enjoyed reading this preprint very much. The authors took an approach they previously developed and applied it to reveal novel biology surrounding a core complex involved in DNA replication and the extrusion of DNA, whilst utilising additional techniques, cell systems and modelling to support their findings. I found the use of TIRFM very interesting to look at protein complex interactions on DNA. Often, the DNA can be thought of as a static, linear molecule and this paper is a reminder that the DNA landscape is in fact a complex environment of interacting factors which can influence genome architecture, and if perhaps altered, could affect gene expression leading to diseases states.

Q1: Ordinarily geminin is degraded at the metaphase/anaphase boundary but here you are retaining it during meiosis II and in G1 cell cycle stage cells. Does the retention of geminin in your cells have any wider consequences on their development?

Q3: You show that MCM barriers could potentially affect gene expression and, as you mention, MCM loading defects have been linked to diseased states in humans. From these transcriptional changes, do you observe dysregulation of any factors that could correlate with defective MCM loading in the context of pathology?

Q4: Your model suggests that cohesin could overcome an MCM barrier. Could you speculate on what you think might happen to allow cohesin to overcome this obstacle? For example, there is evidence to suggest condensin complexes can bypass one and other by forming a DNA structure known as a Z-Loop.