In Eukaryotes, RNA polymerase II (RNAPII) converts DNA into messenger RNA (mRNA) during transcription. Information within the mRNA can then be translated into protein molecules for use by the cell. To prevent unwanted changes in gene expression, which could compromise cellular fitness, transcription is controlled at multiple levels including by the proposed spatial organisation of transcription into distinct ‘factories’, which can contain RNAPII and other regulatory factors required to transcribe the DNA template (1). This is thought to support efficient transcription. What is unclear is how these ‘factories’ are established and maintained in mammalian cells. Here, Hari-Gupta and colleagues, using a range of experimental techniques, uncover a role for a motor protein, myosin VI, in transcription ‘factory’ establishment. Myosins are a family of molecular motors which hydrolyse ATP to drive their ‘walking’ like motion across filaments of actin within the cell to transport cellular cargo but only recently, their activities have been linked to transcriptional regulation. Building on prior knowledge (2+3), the authors interrogate the function further discovering myosin VI can act as a molecular anchor for RNAPII, tethering it to transcription ‘factories’.

Fig. 1. Diagram depicting the RNAPII anchoring function of myosin VI based on the findings within the paper. Adapted from Figure 9 (CC-BY-NC-ND 4.0 International license)

Myosin VI is located in both the cytoplasm and the nucleus of HeLA cells. To study its nuclear localisation in more detail, the authors perform STORM (stochastic optical reconstruction microscopy; 4) super resolution imaging. STORM is a high precision imaging technique using fluorescent probes which alternate between a fluorescing or non-fluorescent state. Instead of capturing all fluorescent signal at the same time, resulting in a more blurred an image, small snapshots are collected, pieced together, and assembled into a final image. Here, the authors reveal ~ 500 clusters of myosin VI present in each nucleus, which increase in number when transcription is stimulated by the addition of serum (~ 700) and in size (from 1.2 to 1.7 um2) but the clusters likely limit the amount of myosin VI molecules within them. They confirm these clusters depend upon the motor activity of the myosin by blocking its activity using the inhibitor TIP [2,4,6-triiodophenol]. By asking if these myosin VI clusters co-localised to transcription initiation regions by detecting RNAPII-pSer5), they find co-localised clusters to be larger (when compared to clustered which did not co-localised) with transcription stimulation increasing cluster number, size and increased co-localisation events between myosin VI and RNAPII-pSer5 (Fig. 1 and 2). 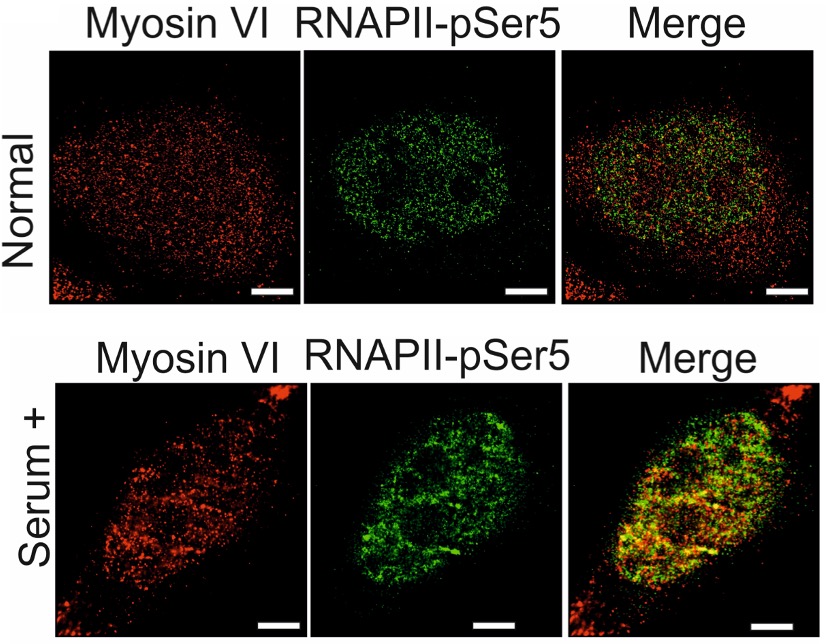 As shown, myosin VI can organise RNAPII in the nucleus and may direct RNAPII associations with chromatin during transcription initiation. To ask if transcription initiation is disrupted when myosin VI activity is compromised, the authors performed ChIPseq to detect the genomic location of RNAPII-pSer5, in the presence and absence of TIP treatment. After TIP treatment (when compared to untreated cells) they report decreased interactions between RNAPII-pSer5 and the chromatin supporting their hypothesis (Fig. 3). They selectively disrupted the nuclear myosin VI pool with over expressed truncated versions of myosin VI with nuclear localisation signals (NLS) causing nuclear myosin VI to localise aberrantly. Additionally, they confirm this transcription initiation associated RNAPII clustering by myosin VI is actin dependent (Fig. 4).

Transcription ‘factories’ have proven challenging to image in live cells (1) and here, the authors are unable to visualise RNAPII clustering using single molecule tracking or distinguish between RNAPII-pSer5 and the general pool of RNAPII. However, examining and tracking the movement of all tagged RNAPII (by tagging the subunit Rbp1 with a SNAP or HALO tag), they observed, by stimulating transcription, a slower diffusion of RNAPII molecules in the nucleus (relative to unstimulated conditions). On the other hand, when myosin VI activity was disrupted, either by RNAi or TIP addition or by disrupting actin dynamics, they found RNAPII molecules to be more diffuse (less confined) in the nucleus. By inhibiting RNAPII using alpha-amanitin, the found a similar effect on myosin VI, where the molecules were more diffuse demonstrating that these two proteins can influence the behaviour of each other.

Next, the authors evaluated the effects of myosin VI depletion on global transcription in HeLa cells as addition of TIP reduced active transcription (showing an increase in the repressive chromatin mark H3K9me). RNAi depletion of myosin VI correlated to a 3-fold reduction in growth with the transcriptomic analysis revealing marked effects on processing involving signal regulation, cell communication, proliferation and stimulus responses. Within the down-regulated cohort of genes, two thirds of genes required for the cellular response to serum (used to stimulate transcription) were detected revealing myosin VI is required for gene expression in response to stimuli, in this case the addition of serum.

Myosin VI can act as an anchor when subject to increased molecular force. As a molecule, RNAPII is large and its potentially mobile behaviour could generate the force needed to induce the anchor-like behaviour of myosin VI. To test this hypothesis, the authors use a ‘molecular spring’ system. Simply, they insert a repeat sequence downstream of its cargo binding domain (Fig. 8) of myosin VI, which does not alter the stability, localisation or activity of this protein. When tension is applied across the ‘spring’ insert, the inserted region unfolds and leaving myosin VI insensitive to changes induced by forces up to 10 pN meaning it should not be able to perform anchoring-like functions. As their earlier results showed, loss of myosin VI disrupts the nuclear localisation of RNAPII-pSer5. Thus, by depleting myosin VI by RNAi and overexpressing the modified ‘spring’ form of myosin VI, the authors found they could not fully restore RNAPII-pSer5 distribution but over expression of the unmodified myosin VI could, supporting their hypothesis that myosin VI plays a role during transcription initiation.

I found this preprint very enjoyable to read. The authors use a wide array of techniques ranging from super resolution imaging to genomics datasets and single molecule analysis to examine their hypothesis from different angles to carefully dissect the role of Myosin VI during transcription. Their multi-disciplinary approach adds considerable depth to their findings. Despite the identification of transcriptional ‘factories’ in the 90’s, how they are established has remained largely elusive. The findings in this paper now shed light on this phenomenon and with it, the question of myosin involvement in other types of nuclear cluster formations is raised, for example at regions of active DNA repair.

To address your questions: