More to RADX than replication forks: RADX functions at telomeres to suppress RAD51 mediated telomere fragility in the absence of POT1 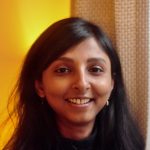 Telomeres – the natural ends of chromosomes, are at risk of being misrecognized as damaged DNA breaks. As a result, they are faced with some unique challenges, and have to: 1) avoid being detected as free DNA ends to prevent unwanted DNA damage checkpoint activation; 2) be protected from cellular nucleases to avoid degradation; 3) despite these pressures, be accessible to the DNA replication and repair machinery when required. Consequently, telomere maintenance requires robust and precise regulation of multiple pathways.

Telomeric DNA consists of tandem sequence repeats ending in a 3’ ssDNA tail, that is tucked away in a t-loop structure (Figure 1). Telomeric DNA is also bound by the highly specialized shelterin protein complex which suppresses DNA damage signaling. Human shelterin is a multi-subunit complex that includes TRF1, TRF2 (bound to the dsDNA) as well as POT1 (bound to the ssDNA) (Figure 1).

Loss of shelterin components leads to telomere fusions and overall telomere fragility, which in part, can be caused due to inappropriate homologous recombination (HR)1. HR is mediated by RAD51 recombinase, which catalyzes DNA strand exchange between homologous DNA sequences and is required for accurate repair of dsDNA breaks. However, excessive or inappropriate HR can lead to increased chromosomal translocations, and therefore needs to be suppressed at telomeres.

RADX was identified in 2017 as a ssDNA binding protein acting during replication to suppress RAD51 activity2,3. RADX binds ssDNA at replication forks, which excludes Rad51 and prevents unnecessary Rad51-mediated fork reversal. However it is not known whether RADX has any other cellular functions. In this study, the authors identify RADX as a new component required for telomere maintenance that suppresses Rad51 mediated telomere fragility, particularly in the absence of POT1.

Why I think this preprint is interesting:

RADX is a ssDNA binding protein that ensures smooth progression of replication forks, however no functions for RADX outside of active replication are known. This study is interesting, as it identifies RADX as a novel member of the telomere maintenance machinery, and finds that RADX constitutively associates with telomeres independent of cellular replication. This new insight highlights the multiple strategies used to maintain telomere integrity, and expands our current understanding of how and where RADX plays a role.

In this preprint, the authors use proximity ligation of biotin to label proteins in the telomere microenvironment. Using shelterin proteins TRF1, TRF2 and POT1 as bait, they analyzed the associated proteins by mass spec and found RADX to be common to all three sets. This strongly suggested that RADX localizes to telomeres.

They then generated cell lines expressing FLAG-tagged RADX and analyzed its localization using immunofluorescence. They found that indeed, RADX is recruited to telomeres. Notably, a RADX mutant that is defective in binding ssDNA had a strong reduction in its localization to telomeres, indicating that RADX binds the ssDNA in telomeres.

Current models suggest RADX functions at replication forks to prevent inappropriate fork stalling or reversal4. Interestingly, in this study the authors found the extent of RADX localization to telomeres was independent of replication, indicating it plays a fundamental role in telomere maintenance. Using chromatin IP, the authors also showed that treating cells with hydroxyurea led to a higher accumulation of RADX at the telomeres.

POT1 is a component of the shelterin complex, that binds the telomeric ssDNA and is needed to maintain telomere integrity1. Given that RADX also binds ssDNA at telomeres, the authors wanted to investigate whether the two have any antagonistic/cooperative functions. To look at defects in telomere maintenance, they scored telomere fragility (diffuse or split telomere signal from a single chromosome) and telomere–sister chromatid fusions. They found that RADX and POT1 associate with the telomeric DNA independent of each other. RADX alone did not lead to loss of telomere integrity, however depletion of RADX in a POT1 KO background highly aggravated the telomere fragility seen in POT1 deletion cells. By co-depleting RAD51, they were able to rescue the telomere fragility, indicating that POT1 and RADX antagonize RAD51.

At replication forks, RADX suppresses RAD51 binding4, leading the authors to ask whether this mechanism was conserved at telomeres. They used immunofluorescence to observe RAD51 recruitment to telomeres in various deletion mutants. Consistent with their observations of telomere fragility, POT1 depletion led to higher levels of RAD51 at telomeres, which increased even further upon co-depletion of RADX.

Together, these results define a new role for RADX as supporting POT1 function in telomere maintenance. When POT1 function is compromised, RADX is required to suppress RAD51 binding at telomeres and prevent RAD51-mediated telomere fragility.