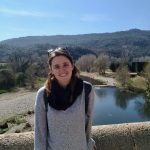 Mitochondrial dysfunction has been extensively associated with loss of muscle bulk and atrophy [1]. Progressive loss of muscle function is, in turn, a critical factor for the development of bone alterations, such as osteoporosis, due to the reduction of bone strength caused by a decrease in the mechanical loading on the skeleton [2]. During bone remodelling carried out by bone cells (osteoclasts and osteoblasts), bone marrow (BM) immune cells undertake specific functions that regulate the function of bone cells. In fact, in the context of autoinflammatory diseases, BM T cells provide a specific pro-inflammatory environment that allows osteoclast differentiation, which results in bone resorption. Thus, bearing in mind that during muscle atrophy, pro-inflammatory cytokines can be secreted to the system, the authors hypothesized that there could be a mechanism linking muscle mitochondrial dysfunction, bone marrow signalling and bone loss. 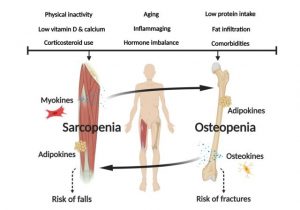 First, the authors validated the phenotype observed in the MKO mice: OxPhos dysfunction and stress response in the skeletal muscle. This is characterized by decreased expression levels of the OxPhos complex subunits, accumulation of abnormal, swollen mitochondria with disrupted cristae, and increased expression levels of proteins related to stress responses, such as the unfolded protein response (UPR) or ER stress. Besides, evaluation of the physical performance of MKO mice showed loss of body mass, motor coordination and strength, suggesting that muscle mitochondrial dysfunction results in muscle dysfunction and atrophy. Furthermore, the authors describe bone loss in these mice, characterized by alterations in various bone histomorphometric parameters including: bone mass, mineral density, trabecular bone number, thickness and volume, osteoblast and osteoclast activity, and serum levels of the bone formation and reabsorption markers (procollagen I N-terminal propeptide and C-terminal telopeptide of collagen, respectively).

In order to gain insights into the connection between muscle mitochondrial dysfunction and bone loss, the authors performed transcriptomic analyses in the EDL muscle, in which significantly higher levels of the myokine FGF21 were found in MKO mice compared to wild-type (WT). Nevertheless, downregulation of FGF21 in MKO mice did not rescue or restore bone loss, suggesting that the effects observed in the bones of these mice were independent of the role of FGF21.

Considering that muscle mitochondrial dysfunction has been described to trigger the upregulation of inflammatory cytokines [4], the authors performed various analyses in BM to test whether increased inflammation in the BM caused by muscle dysfunction could lead to bone loss. The following were assessed: i) expression levels of pro-inflammatory molecules in BM cells of MKO and WT by transcriptomic analyses, ii) presence of immune cells in the BM and their characterization by flow cytometry, and iii) serum levels of proinflammatory cytokines. The results of these analyses suggested that MKO mice present local (not systemic) BM inflammation and T cell infiltration, which could be driving bone loss. Besides, gene enrichment analyses revealed that genes associated with myopathy, osteoporosis, activation of the immune system and adipogenesis were upregulated in BM cells. Particularly, the authors observed activation of the CXCL12-CXCR4 axis which, besides its implication in angiogenesis and metastasis, is involved in certain inflammatory autoimmune disorders such as rheumatoid arthritis. Indeed, treatment of MKO mice with a CXCR4 antagonist not only resulted in reduced T cell infiltration and pro-inflammatory cytokine levels in the BM, but also in the prevention of bone loss. Thus, these data suggest that mitochondrial muscle dysfunction promotes the presence of a pro-inflammatory environment in the BM, characterized by activation of the CXCL12-CXCR4 axis, which in turn results in bone loss. Last but not least, these data were validated in human subjects with hip fracture and lower body mass index, which correlated with a higher inflammatory response, therefore confirming the role of inflammation in the development of bone complications in the context of muscle dysfunction.

Considering the lack of evidence regarding the molecular pathways that link muscle atrophy and bone remodelling, I found the approaches that the authors of the preprint used to shed light on this subject very interesting. They obtained valuable data on the transcriptomics of muscle and bone marrow in the context of muscle mitochondrial dysfunction, as well as extensively characterized the residing immune cells. In my opinion the authors elegantly provide new insights into the link between muscle atrophy and bone loss, which will be very relevant in the context of systemic effects of muscle diseases.

MY QUESTIONS TO THE AUTHORS