Telomeres are nucleoprotein structures present at the end of linear chromosomes. Telomeres protect chromosome termini from being recognized as DNA lesions and, together with telomerase, counterbalance the incomplete replication of terminal DNA. Since telomerase is mainly inactive in human somatic cells, telomeres shorten with aging. When telomeres reach a critical length, they trigger the DNA damage response (DDR) that, through stabilization of the p53 protein, can lead to apoptosis or senescence – the two principal outcomes of an irreversible cell damage. Apoptotic cells are removed from tissues, whereas senescent cells tend to accumulate over time and are associated with aging phenotypes. Although the mechanisms leading to a terminal cell fate are mainly understood, what determines the choice between apoptosis or senescence remains unclarified.

In this preprint El-Maï and colleagues investigate the cellular outcome of accelerated telomere shortening in zebrafish. It has been previously shown that telomerase deficient (tert-/-) zebrafish have shorter telomeres than wild-typeanimals. tert-/- fish have a shorter lifespan and develop several degenerative conditions, mainly affecting highly proliferative tissues, such as the testis and the gut. While differences in telomere length can already be appreciated in 3-months-old animals, macroscopic and histological differences are only visible at 9 months of age. The authors open this manuscript showing that tert-/- tissues, despite being macroscopically similar to their wild-type counterparts, contain a large number of apoptotic cells. Further analysis confirms that in absence of telomerase, the DNA damage response is already strongly activated at 3 months of age, resulting in p53 stabilization and extensive apoptosis. Interestingly, at this stage tert-/- tissues do not show any sign of cellular senescence. When the authors turn to tissues coming from 9-month-old fish, they face a completely different scenario. In this case, p53 levels are comparable between tert-/- and wt fish and only a modest number of apoptotic cells can be observed in tert-/- tissues. In contrast, at this stage tert-/- tissues entail a large number of senescent cells. At the molecular level, this age-dependent switch from apoptosis to senescence is underscored by an increase in the levels of p15, the homologue of the CDK inhibitor p16. Since p15 induction can be a consequence of the accumulation of reactive oxygen species (ROS) due to dysfunctional mitochondria, the authors investigate if there is an age-related decrease in mitochondrial functionality between tert-/- and wt fish. At the age of 3 months, ROS levels are comparable between mutant and wt, nevertheless ROS significantly accumulates with age in tert-/- fish. This increase is accompanied by a decrease in ATP levels, supporting the hypothesis that the loss of mitochondrial fitness is the cause of the age-dependent switch in cell-fate decision. 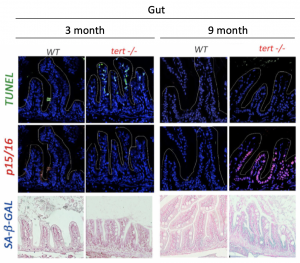 Figure 1 Immunofluorescence images comparing gut tissues coming from 3- or 9-month-old zebrafish. Telomere attrition trigger apoptosis (visualized by TUNEL assay) in young animals and senescence (indicated by p15/p16 or SA-ß-GAL) in later stages. The figure is adapted from figure 1 of the preprint with permission of the authors.

It has been shown in mammalian cells that expression of one of the major ROS scavengers, mitochondrial manganese superoxide dismutase (SOD2), decreases with age. SOD2 expression is controlled by FoxO proteins, a family of transcription factors responsible for a wide range of cellular processes, including the DNA damage response and ROS detoxification. In 9-month-old fish, western blot analysis shows that SOD2 levels are reduced in tert-/- tissues, compared to wt. SOD2 downregulation is accompanied by the inactivation of members of the FoxO family and the activation of their upstream inhibitory kinase AKT. AKT is a central regulator of growth-promoting signals and can directly be activated by the mTOR complex 2. Activation of a pro-proliferative pathway in an organism exhibiting growth defects seems contradictory, but the authors hypothesize that this activation could be a consequence of the high level of apoptosis observed in tissues at 3 months of age. In fact, it has been shown that dying cells of proliferative tissues try to compensate for the empty space, by secreting mitogenic signals to promote proliferation of neighbouring cells. To test their hypothesis, El-Maï and co-workers turn to tert-/- p53-/- fish, in which absence of p53 abrogates the massive cell death observed in absence of telomerase at 3 months of age. Interestingly, all the phenotypes observed in old tert-/- fish were relieved in absence of p53. This data supports the hypothesis that apoptosis and the thereby induced compensatory proliferation are the causes of tissue damages and cellular senescence observed in old fish lacking telomerase. Finally, to directly test the role of the AKT/FoxO pathway in promoting cellular senescence, the authors crossed the tert-/- fish with a strain haploinsufficient for zTOR, the zebrafish homologue of mTOR. In this fish, AKT activation is reduced, resulting in a decreased expression of p15 in old fish. Nevertheless, possibly due to the partial inhibition of zTOR, dampened expression of p15 is not sufficient to restore tissue morphology in old animals.

What I like about this work and future directions

The final outcome of activation of the DNA damage response can be highly variable and we currently have a limited understanding of the factors determining the fate of a cell following DNA damage. El-Maï and colleagues start from the observation that there is an age-related transition from apoptosis to senescence following telomere attrition in zebrafish and nicely define the molecular mechanisms responsible for this switch. Now, it remains to be clarified whether this switch in the response to telomere shortening is conserved in other organisms.

Did you score for senescent cells in tert-/- ztor+/- animals at 11 months of age? And in the G2 tert-/- fish after treatment with the AKT inhibitor?

Our previous studies showed that WT fish exhibit the same defects observed in tert-/- mutants (Carneiro et al.; Plos Genetics 2016), including testis and gut alterations described in this work. In WT fish, tissue degeneration can be observed from 18-24 month of age. Progressive loss of tissue integrity is associated to telomere shortening. Telomere length in old fish is comparable to the one in tert-/- mutants when similar defects are observed, suggesting that short telomeres may initiate the age-associated phenotypes.

In WT zebrafish, our previous work reported a analogous transition from apoptosis to senescence, as in tert-/- fish. Apoptosis indeed appears at early stages of aging while senescence becomes predominant in later ages of WT zebrafish. Like in tert-/- fish, tissue defects are associated with accumulation of senescent cells. We anticipate that the degenerative phenotypes are outcomes of a sequential activation of apoptosis and senescence in aging tissues.

In this study, we demonstrated that the Akt pro-proliferative pathway is involved in the switch between apoptosis and senescence. Our work emphasizes the importance of studying telomere-dependent cell fates in an in vivo setting. Indicating, with other results from our studies, that the same cells may respond differently depending on the surrounding environment.

Did you score for senescent cells in tert-/- ztor+/- animals at 11 months of age? And in the G2 tert-/- fish after treatment with the AKT inhibitor?

Thanks for giving us the opportunity to clarify these points.

We performed SA-Beta-Gal assays on tert-/- ztor+/- animals. However, similar to our observations on tissue morphology, we did not see a clear reduction of senescence staining. ztor haploinsufficiency may not be sufficient to fully rescue senescence upon telomere shortening. Potentially, a small reduction of senescent cells may not be visible using this technique. In contrast, RT-qPCR being a quantitative and highly sensitive technique, allowed us to detect a reduction in p15/16 expression in the double tert-/- ztor+/-, indicating that ztor activity is required for the full induction of this senescence marker.

As for the second question, we did not perform this experiment yet. However, it is worth noticing that, in line with a rescue of senescence after Akt inhibition, G2 tert-/- larvae exhibit a reduced p15/p16 protein and mRNA levels compared to untreated larvae.

Considering the reduced regenerative capacity seen in zebrafish in tert-/- and during aging, we are keenly interested in understanding the involvement of Akt and its interplay with p53 in this phenomenon.