How does the endothelium integrate mechanical force exerted by blood flow? Batta and colleagues show the importance for the guanine nucleotide exchange factor, ARHGEF18, in regulating endothelial cell alignment in the direction of flow. 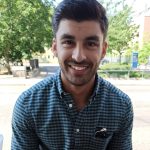 Endothelial cells are continuously exposed to shear stress exerted by blood flow. This frictional force is sensed, at least in part, by components of cellular junctions (including receptor tyrosine kinases, cadherins, and integrins) and transduced into intracellular signals through the process of mechanotransduction. Altered shear stress signaling modulates gene transcription, which facilitates changes in the behavior and phenotype of the endothelium. Understanding the response of endothelial cells to shear stress is of importance as it has implications for vascular disease. Several mechanosensory pathways have been identified that relay external mechanical forces to endothelial cells lining blood vessels. In vitro, flow-induced endothelial alignment is dependent on the activation of GTPases and consequent actin reorganization [1]. In vivo, it has been shown that endothelial junctional protein complexes including platelet endothelial cell adhesion molecule (PECAM-1), vascular endothelial cadherin (VE-cadherin) and vascular endothelial growth factor receptor 2 (VEGFR2) play an important role in the adaptive response to shear stress [2]. However, it is still not entirely clear how mechanical forces exerted by blood flow are transmitted from the junctions, via the cytoskeleton, into the cell.

The GTPases represent a family of molecular switches that play a pivotal role in the regulation of the actin cytoskeleton. Like many of the GTPases, Rho GTPases cycle between an active GTP-bound form and an inactive GDP-bound form. This cycling is regulated by guanine exchange factors (GEFs) and GTPase activating proteins (GAPs), which activate and inactivate Rho GTPases respectively, through hydrolysis of GTP [3]. When in their active conformation, Rho GTPases recruit and activate downstream effectors to elicit cellular processes.

Using a combination of bulk RNA sequencing, microfluidics, and confocal imaging, the authors dissect the role of the RhoA GEF, ARHGEF18, in triggering the endothelial response to flow. They demonstrate that ARHGEF18 is required for proper junctional complex formation as well as adhesion and migration. Overall, the authors show that the expression of ARHGEF18 is indispensable for endothelial alignment to flow and triggers p38 MAPK activity, which could have great implications for vascular pathology and homeostatic mechanisms of flow sensing.

The authors performed bulk RNA-sequencing on endothelial cells exposed to varying degrees of shear stress. Interestingly, the authors found that ARHGEF18 was downregulated in response to increased rates of shear flow. Importantly, the well-defined flow-responsive gene KLF2 was upregulated and thus used as an internal control. The authors confirmed the specificity of ARHGEF18 in regulating endothelial RhoA GTPase, and not other GTPases such as RAC1. Furthermore, they showed that ARHGEF18 exhibited increased activity under conditions of physiological flow (16 dyn/cm2) versus high pathological flow (36 dyn/cm2), suggesting that ARHGEF18 modulates its activity depending on the magnitude of the shear stress. Staining of vascular networks of the retina in mice indicated that ARHGEF18 is specifically expressed in arteries near the optic nerve, but not in veins or capillaries, further supporting a flow-regulated mechanism of ARHGEF18 expression.

Using loss-of-function experiments, the authors identified that ARHGEF18 is critical for junctional complex maintenance of endothelial junctions. Through co-immunoprecipitation, they demonstrated that ARHGEF18 binds to the tight junctional protein ZO-1. Additionally, using RNAi to deplete ARHGEF18, Batta and colleagues revealed that there was decreased barrier formation of endothelial monolayers when cells were plated onto real-time conductance-based assays, as well as increased ‘gaps’ in endothelial cell monolayers as revealed by VE-cadherin staining. Interestingly, ARHGEF18 depletion also impacted focal adhesion maturation, suggesting that ARHGEF18 regulates both cell-cell and cell-matrix interactions, and implicating ARHGEF18 in multiple mechanosensitive modalities.

Finally, the authors demonstrated that the endothelial response to shear flow is abrogated by the depletion of ARHGEF18. Interestingly, the authors outlined a mechanism for the involvement of ARHGEF18 in the endothelial cell response to shear stress which includes the downstream activation of p38 MAPK. Using chemical inhibitors of p38 and in vitro flow experiments, they showed that inhibition of p38 phenocopies ARHGEF18 depletion, as it led to misalignment of the endothelial cells to shear flow. Furthermore, the authors  demonstrated that GEF function is critical for p38 phosphorylation and activity in response to shear flow by expressing an inactive mutant of ARHGEF18. This neat construct also contained a shRNA to deplete endogenous ARHGEF18 that might mask the effect of the mutant. Importantly, expression of mutant ARHGEF18 also impaired endothelial cell alignment, highlighting that the activity, rather than the expression, of ARHGEF18 is critical to this response.

This study is particularly interesting as it outlines a novel role for ARHGEF18 in several aspects of endothelial biology, including barrier function, flow response, adhesion and migration. This study is therefore important since it leads to many further questions as to the role of ARHGEF18 in vascular mechanosensing. For example, the inability of endothelial cells to align to flow in the aorta leads to inflammation and contributes to the onset of atherosclerosis. In the discussion section, the authors allude to future in vivo studies. It will be very interesting to see the effects of endothelial-specific ARHGEF18 deletion – especially whether endothelial cells become misaligned under laminar flow found in the descending aorta. This preprint also appealed to me as I have a great interest in vascular mechanosensing and how mechanical inputs, such as shear flow, influence cell behaviour and function.