Ever wonder how your left and right limbs grow to be the same length and never wildly out of proportion with the rest of your body? A new preprint investigates the mechanisms controlling limb-to-limb and limb-to-body ratios in the mouse. 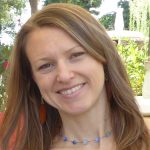 What determines organ size remains a fascinating open question in development. Organ growth can be promoted by signals released from the organ itself (intrinsic regulators like morphogens, Hh, Wnt, etc) and often also by signals originating from elsewhere (extrinsic regulators such insulin-like growth factor, IGF). The importance of the interplay between intrinsic and extrinsic inputs into organ growth is perhaps best exemplified by paired organs, such as the limbs. While the left and right limbs grow in distant parts of the animal, their growth is exquisitely matched, even if one side is injured during development. Furthermore, their size must be properly scaled with the body if they are going to be effective at tasks like locomotion.

Results from the preprint:

The authors of this preprint develop a genetic technique for inducibly inhibiting proliferation in a fraction of cells of the left limb of a developing mouse – specifically chondrocytes, the cells that make the initial cartilage templates of the bone. They discovered that above a certain threshold for insult, the neighboring (genetically unaffected) chondrocytes proliferate more to compensate for the lower density of cells in left limb. Furthermore, the overall body size (including the right limb) decreases by 10%. Injecting IGF rescues the reduction in body size; but the limbs are still coordinated with each other and now proportionally slightly too small for the body. Thus, upon mosaic unilateral limb insult, a drop in IGF (originating from the placenta) is required to maintain normal body:limb proportions, but something else maintains left/right symmetry. 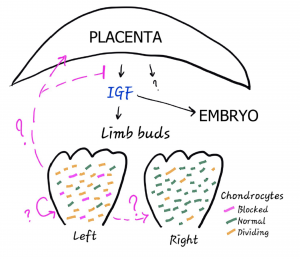 Both compensatory proliferation, as well as systemic inputs into limb/limb and limb/body coordination have been studied extensively in the Drosophila wing, which is my own system. Thus, I can’t help but make comparisons, and actually there are some really important differences.

In the wing, compensatory proliferation has been observed when cell death is ectopically activated or there is significant tissue loss from injury. In a mosaic situation more analogous to this study, usually faster growing wing cells actually kill their slower neighbors and take over the tissue (so-called cell competition). Importantly, because the perturbed chondrocytes are not dying, the compensation observed in the limb is not really analogous. In contrast, the data indicate that chondrocytes are somehow sensitive to cell density. How does that work? The authors suggest it’s because the arrested cells are sending out an “alarm” signal that must accumulate to some concentration to be active. But maybe it’s more like quorum sensing, where all cells are secreting a signal whose concentration is then a readout of cell density? Or maybe the “signal” is actually mechanical in nature.

This work also highlights the existence of a dynamic inter-organ signaling network underlying not only limb-limb coordination but overall body size control – something that has been a hot area of research in Drosophila but is far less understood in vertebrates. The finding that the growth of a limb – something that could be considered non-essential – influences overall body size in a vertebrate is striking. How the limbs communicate to the placenta to regulate IGF secretion will be a key focus for future work. In addition, we still need to figure out how left and right sides are coordinated! This work rules out the possibility that IGF mediates this symmetry, but what about other signals emanating from the placenta? The authors favor the idea that there is direct signaling between the two sides, but there is not yet data (in any system) for how that may work.

In Drosophila, size matching of the adult organ precursors (the so-called “imaginal” tissues) is thought occur via the brain, rather than via direct communication between imaginal tissues. Injury to these tissues causes the upregulation of a relaxin called Dilp8, which travels to the brain to inhibit steroid hormone production. High levels of steroid are required to end the larval growth phase, but lower levels are required for normal (but not regenerative) imaginal growth. Thus, by inhibiting steroid production, Dilp8 not only gives the injured tissue more time to recover (by extending the larval growth phase), but it also prevents the uninjured paired organs from over-growing during this extended growth phase (by depriving them of a key signal that the injured tissue doesn’t seem to need). No such relaxin was found induced in this analogous scenario in the mouse, however, so left/right coordination remains a mystery. 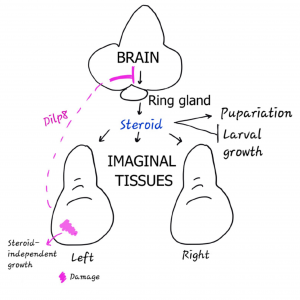 In sum, this work provides fascinating and important new insight into intrinsic and extrinsic regulation of organ growth in a vertebrate system. The experimental approach developed here will be very useful for future investigations into the molecular mechanisms underlying growth control and can presumably also be extended to other paired organs. I look forward to their future discoveries!

References for the Drosophila work I mentioned:

preLighter Anna Kicheva has also highlighted this preprint – check out her highlight here.