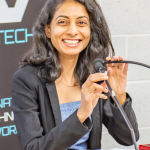 Sleep and circadian rhythm disruptions are highly prevalent in patients with neuropsychiatric disorders. Bipolar disorder (BD) is one of the major neuropsychiatric illnesses characterized by cognitive dysfunction, mood changes and sleep/activity pattern shifts. Insomnia and poor sleep quality are some of the most widespread symptoms in BD and these sleep disturbances are often good predictors of mood swings. Hence establishing the stability of sleep-wake and circadian cycles is a key therapeutic strategy in BD patients1.

Lithium is a wonder drug that everyone knows about as a mood stabilizer in BD patients. Lithium is shown to be a definitive neuroprotective agent in BD with beneficial effects in the prevention of severe mood changes, psychosis and suicide2. While Lithium continues to be the main pharmacotherapy drug for the treatment of BD, 30-40% of patients fail to respond to the treatment. BD is a complex, polygenic disorder where patients display heterogeneous genotypic and phenotypic disparities. Lithium responsiveness, therefore, can be an alternate strategy to reduce heterogeneity in clinical studies.

Lithium treatment altered phase and period of circadian activity patterns in many animal models and fibroblast cells harvested from BD patients. Besides, chronotype is a predictor of Lithium response where patients with ‘high morningness’ show higher Li responsiveness3. While animal models are informative to chart out behavioral and pathological hallmarks of Li responsiveness, human cellular models are irreplaceable in understanding biological mechanisms of Lithium response in BD patients.

Patient-derived induced pluripotent stem cells (iPSCs) provide an excellent tool to characterize the etiology of any human disease. A recent preprint from Mishra et al investigates the cellular and molecular changes in circadian rhythmicity from patient-derived iPSCs from Lithium-responsive and non-responsive BD patients.

Circadian rhythm is a ubiquitous, cell-autonomous process that displays an oscillation of around 24-hours. Circadian rhythms are generated and regulated by circadian clock genes whose mRNA and protein products oscillate in a periodic manner. The clock genes are expressed in all tissues but are required specifically in central clock neurons that communicate with each other to generate a synchronous circadian output. How does the clock function in the neurons of BD patients had not been investigated before. The authors in this manuscript use live imaging and gene expression analyses to identify the relationship between Lithium response and circadian rhythm disruption in BD patients.

The authors tested a cohort of BD patients and chose the most and least lithium responsive people to harvest skin cells for the study. Bioluminescence reporters are crucial in the studies of circadian molecular oscillators. The authors used luciferase activity of core clock gene PER2 in iPSC-derived neuronal precursor cells (NPCs) and glutamatergic neurons to compare and contrast the hallmarks of circadian rhythmicity in healthy vs lithium-responsive and non-responsive BD patients. 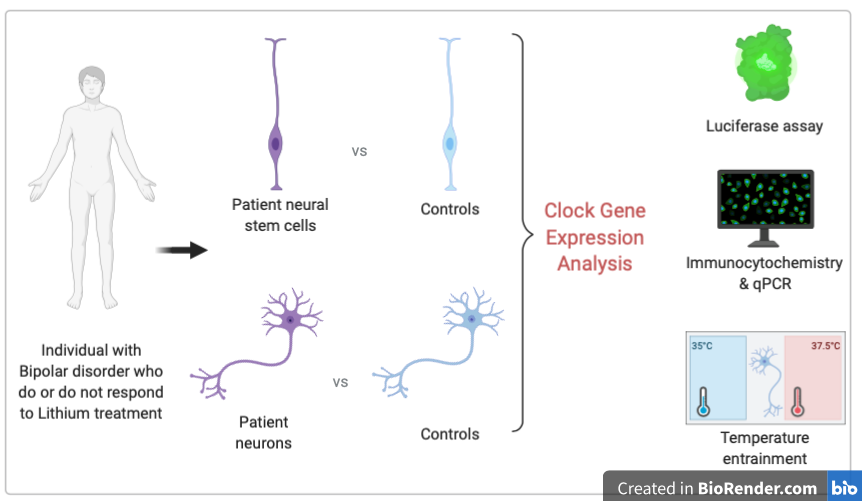 Another crucial difference in rhythmicity was identified in healthy control cell lines where differentiated mature neurons were more rhythmic compared to NPCs. Meanwhile, the overall proportion and rhythmicity of neurons remained similar to NPCs in BD cell lines. The authors further analyzed cells that were highly rhythmic to identify phase differences. Control NPCs and neurons showed clustered phase compared to BD cells with dispersed phase. When the authors treated these cells with Lithium, they further identified a concentration-dependent effect on period lengthening in control and Lithium responder cells. As expected, Lithium treatment had no effect on Lithium non-responder cells.

The authors also analyzed the levels of seven core clock genes that provided the contribution of the molecular clock network in the circadian disruption phenotypes observed in the luciferase assay. Among the clock genes, BD cells showed a significant increase in PER2 mRNA and protein levels. The overexpression of PER2 which is a negative regulator of the clock might explain the weak rhythmicity phenotype in BD cells. Among the BD cohort, the Lithium responder neurons had higher CRY1 and BMAL1 mRNA expression compared to the Lithium non-responder neurons. This particular observation might pave the way in developing new targets for drug therapies to correct circadian rhythmicity defects in BD patients.

Lithium is an old drug with promising beneficial effects not just in BD but also in depression, psychosis and a number of neurodegenerative disorders. The molecular and cellular targets of Lithium’s action are numerous. Work from McCarthy and colleagues directly demonstrates circadian disruptions in patient-derived neurons. I chose to highlight this preprint because it undoubtedly provides an important framework for future large-scale studies in iPSC cell lines to characterize circadian disruptions in BD patients with varying genetic backgrounds. Further, the use of the circadian entrainment technique to improve cellular rhythmicity and stabilize sleep disturbances in Lithium non-responsive BD patients might lead to a game-changing therapeutic strategy.

We are really excited that the method we developed to study rhythms in human clinical samples using fibroblasts translated so well into the iPSC-neuron model. It will add nicely to the experimental tools available to researchers to study other neuronal models of psychiatric disorders. The demonstration of rhythm deficits in bipolar disorder neurons shows that the dimension of time is important to consider in future studies.