How does the Golgi recycle?

In eukaryotes, proteins are made within the endoplasmic reticulum (ER), an organelle composed of tubules and flattened sacs in the cytoplasm, and then transported to an organelle known as the Golgi Apparatus (GA). Within the GA, proteins can be further processed, for example, they can become glycosylated via the addition of carbohydrate groups by enzymes within the GA. The GA itself is made up of sub-compartments called cisternae which look like stacks of flat, pouch-like structures. Typically, GA cisterna have two ‘faces’: a cis face, close to the ER, and a trans face, near the plasma membrane of the cell. Proteins enter the GA via the cis end, progress through the organelle (during which time the protein is modified) and emerge from the trans-Golgi network (TGN) at the trans end to be journeyed elsewhere (1). In some yeasts, the GA is not stacked, with individual cisterna seen maturing from cis-to-trans (2).

Though the GA is well studied, we still don’t fully understand how cargo transports through this organelle or how recycling of GA transmembrane proteins (needed for the reactions/cargo movement) occurs. Largely, two models exist to explain cargo flow: 1) The Vesicular Transport (VT) model, and 2) the Cisternal Maturation (CM) model. The VT model suggests cargo moves through the GA from the cis to trans faces inside vesicles (a structure in which fluids or gases are encompassed by layers of lipids). As they move through, they are modified appropriately. The CM model suggests that the cisternae themselves mature from cis to trans and the cargo is simply a passenger inside, becoming modified during cisternal maturation as they alter their biochemistry (3). Though a CM model is favoured, it is hard to explain why transmembrane GA proteins remain concentrated within distinct regions i.e at the cis, the medial, or the trans end. The authors think this could be due to how these transmembrane proteins are recycled, suggesting the recycling route is what determines where, along the maturation timeline, these transmembrane proteins are placed.

Throughout this study, the authors use high resolution confocal microscopy (4D microscopy) to trace, over time, the kinetic dynamics (i.e movements) of Golgi transmembrane factors. They performed these experiments in living yeast (S. cerevisiae). In this species of yeast, the GA is not stacked and the cisternae are dispersed in the cytoplasm, meaning they can monitor GA protein dynamics more clearly (2). They examined how the movement kinetics of transmembrane factors in single cisternae alter during maturation when they disrupt recycling pathways. 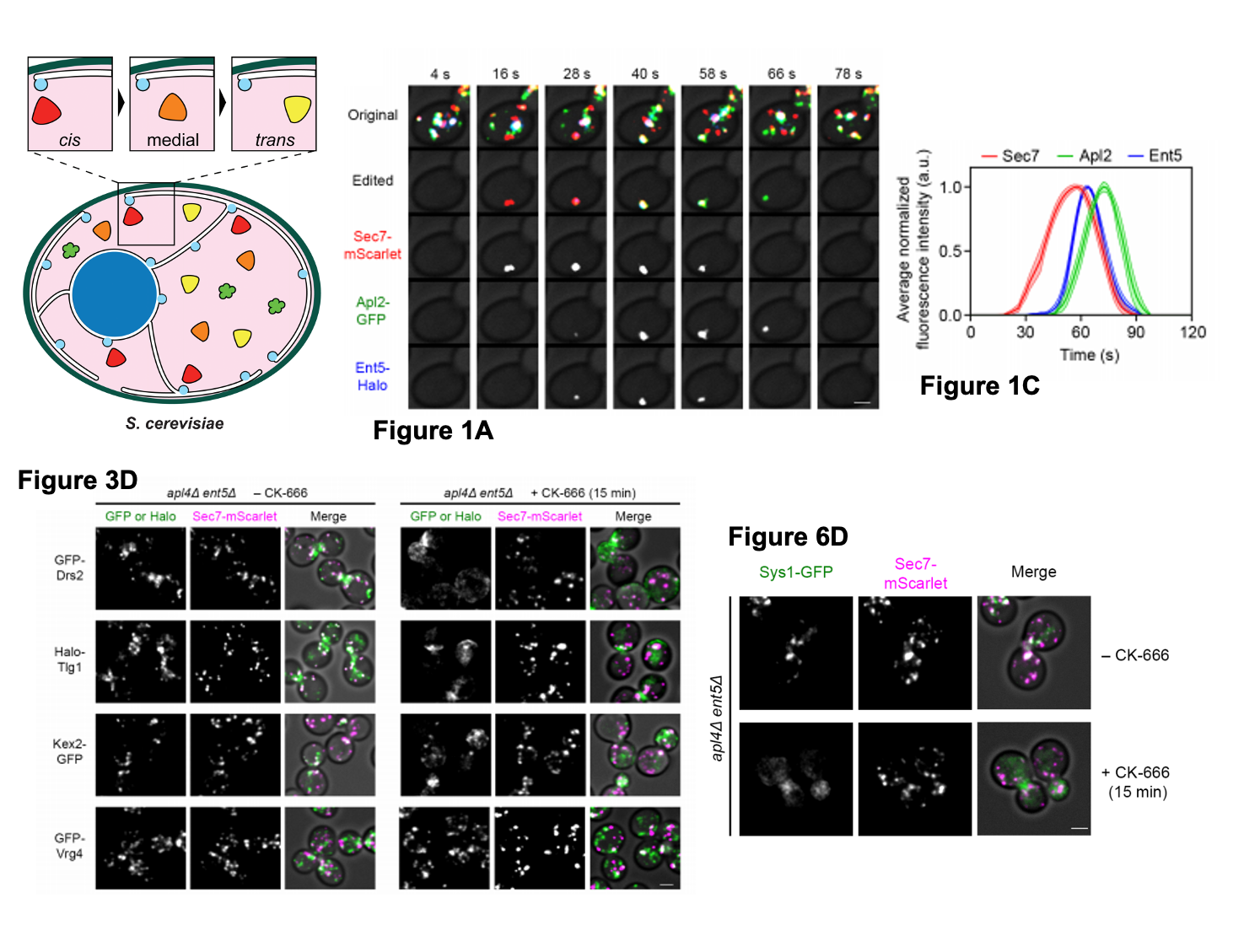 Image shows a selection of data from Casler et al. The schematic representation of the GA arrangement in S. cerevisiae was adapted from Suda and Nakana, 2011 (5). Figure 1A shows the kinetic signatures of AP-1, Ent5 and Sec7 in yeast imaged using 4D confocal microscopy. Figure 1C shows the kinetic signatures of AP-1 (via the subunit Apl2), Sec7 and Ent5 as normalised fluorescent intensity traces. Figure 3D shows representative images detailing the localisation of TGN transmembrane proteins in the absence of AP-1/Ent5 activity and additionally following loss of endocytosis function (by inhibiting with CK-666). Figure 6D shows the mislocalisation of Sys1 in AP-1/Ent5 lacking cells in the presence of CK-666. Yeast schematic made available via a CC-BY 4.0 International license. Figures adapted from Casler et al.

First, the authors show that a recycling pathway co-ordinated by the adaptor complex AP-1 and the associated factor Ent5 localise dynamically to maturing trans-Golgi-like cisternae. The signal of Ent5 both appears before and leaves before AP-1 arrival, revealing AP-1 and Ent5 have separate kinetic patterns which overlap in maturing cisternae. They test if AP-1/Ent5 can recycle the membrane in the trans-Golgi by tracking the movements of a fluorescent membrane dye called FM-4-64, which is trafficked through the GA to the TGN. They show that when AP-1/Ent5 are deleted, much less FM-4-64 was found in the TGN suggesting AP-1/Ent5 can facilitate TGN membrane recycling during cisternal maturation.

Interestingly, AP-1/Ent5 loss is not lethal meaning recycling also happen via an alternative route. The authors asked if the TGN membrane could be recycled via endocytosis to the plasma membrane. By blocking endocytosis in normal cells and cells lacking AP-1/Ent5 using an inhibitor called CK-666, they saw when endocytosis was blocked in AP-1/Ent5 lacking cells, the cisternae almost completely failed to mature. This suggests that TGN recycling is vital and, in the absence of AP-1/Ent5, the TGN membrane recycles via the plasma membrane.

Next, the authors identified other AP-1/Ent5 recycling dependent transmembrane Golgi proteins. Previous data supports the recycling of a phospholipid translocase (Drs2) via AP-1 activity. Drs2 is found in the TGN. Here, they show that when endocytosis is blocked using CK-666 in AP-1/Ent5 deleted cells, Drs2 localised to the plasma membrane instead of to the TGN supporting the recycling of Drs2 via AP-1/Ent5. They found no changes in the localisation of a protein called Vrg4, which is recycled in the early Golgi, suggesting distinct recycling pathways. Further investigation revealed a small cohort of transmembrane TGN proteins are recycled via AP-1/Ent5, showing these proteins largely mirror the movements of Drs2 during cisternal maturation. Thus, the movement and recycling of these transmembrane proteins correlates with the timing of an AP-1/Ent5 driven recycling pathway. Proteins which left before Drs2 arrived were not affected by the loss of AP-1/Ent5 reinforcing the presence of separate recycling pathways

Other Golgi transmembrane proteins traffic to the TGN via prevacuolar endosomes (PVE; i.e late endosomes). This is likely independent of AP-1/Ent5. Recently, the authors have shown that the vacuolar hydrolase receptor (Vsp10) exits the GA at the point of transition when a cisterna becomes TGN-like (4). This suggests Vsp10 would leave before Drs2. However, they saw Vsp10 and Drs2 signals overlapping. They also found another protein, Nhx1, behaved similarly to Vsp10. Together, the localisation of both Vsp10 and Nhx1 to the TGN, even in the absence of AP-1/Ent5 and CK-666 treatment, suggests these proteins recycle independently via a separate recycling pathway operating at a largely similar time to the AP-1/Ent5 recycling pathway in the trans-Golgi/TGN.

Lastly, the authors investigated the transmembrane TGN protein, Sys1. They show that Sys1 and Sec7(a late Golgi marker) behave differently. Sys1 appears and leaves before Drs2 meaning Sys1 traffics independently to Sec7 and Drs2 upstream of trans-Golgi maturation. Unexpectedly, Sys1 recycling still required AP-1/Ent5 activity and in their absence, Sys1 recycled via the plasma membrane like Drs2. They next hypothesised that Sys1 signal, in the absence of AP-1/Ent5, should remain until the cisterna becomes a mature TGNs but this is not what they observed. Instead, Sys1 and Sec7 left at the same time. This is interesting as it suggests AP-1/Ent5 may operate a second recycling pathway in the medial/trans Golgi region. They saw a similar effect with two other transmembrane Golgi proteins known as Aur1 and Rbd2.

I really enjoyed reading this preprint. We still lack information on how the GA itself maintains and regulates its transmembrane composition, and though models have been proposed to explain this, no consensus has been reached. Here, the authors built upon their previous observations using high resolution live cell imaging to try and address this knowledge deficit. Their data highlights an intimate connection between the GA and its associated recycling pathways whilst raising the possibility of a currently unknown control pathway underpinning GA activities. Investigating this hypothesis further could shed much needed light on the regulation of GA maturation, particularly as some diseased states in humans are associated with GA and trafficking defects.

Q2: Is there a defining factor/structure/motif etc that makes a trans Golgi transmembrane protein different from a cis transmembrane Golgi protein? I.e how does the recycling machinery make the decision as to what is going where if the proteins are trafficked to, say the trans-Golgi, independent to the function they perform in the trans-Golgi itself?

Q3: The Golgi is a dynamic organelle. How does the Golgi form its compartments and how are they maintained as they transition from cis-trans?

GTPases of the Rab/Ypt and Arf/Arl families are the main regulators of Golgi maturation, and there has been exciting progress in understanding how these GTPase systems work individually and in concert. We hope to elucidate how the GTPases are coordinated with the membrane traffic pathways. For example, an activated GTPase may recruit tethering proteins that capture specific recycling carriers, and those carriers may deliver a component that activates another GTPase.

Q2: Is there a defining factor/structure/motif etc that makes a trans Golgi transmembrane protein different from a cis transmembrane Golgi protein? I.e how does the recycling machinery make the decision as to what is going where if the proteins are trafficked to, say the trans-Golgi, independent to the function they perform in the trans-Golgi itself?

Information about these sorting mechanisms is limited. The cytosolic tails of some Golgi proteins have been shown to interact with either COPI or AP-1, and transmembrane domains also participate in Golgi sorting. We speculate that some Golgi transmembrane proteins are not merely passengers, but instead play an active role in generating the different types of recycling carriers.

Q3: The Golgi is a dynamic organelle. How does the Golgi form its compartments and how are they maintained as they transition from cis-trans?

We don’t yet have a full answer. The current view is that a new cis cisterna forms by the coalescence of vesicles or other types of carriers derived from the ER. During maturation into a trans cisterna, the incoming and outgoing traffic pathways must somehow be balanced to maintain the size of the compartment while altering its composition.