The rise of whole genome and whole exome sequencing studies has revealed that the genetics behind many human disorders is much more complicated than was first thought, which presents a huge challenge for labs seeking to model complex disease states. A standard approach in investigating a gene’s function is to knock it out in a model organism, and then study the effects of this deletion on a molecular and phenotypic level. Although this can be very valuable, many disease states do not arise from the absence of a single gene – rather the mis-regulation or mis-expression of multiple genetic factors contribute to a spectrum of disease phenotypes. Therefore, in order to fully understand the nuances of complex genetic disorders, it is imperative that we can model in animals the subtle DNA variations which in isolation may not be significant, but in conjunction with other disease alleles may have serious consequences.

This preprint from the Maves lab is the first example of modelling a complex genetic disorder in zebrafish, and demonstrating that a human candidate disease variant of unknown significance acts as a modifier gene for Congenital Heart Defects (CHDs). CHDs are the most common type of birth defect, and 1.35 million babies are born with CHD every year[2]. So far, the range and variety of CHD phenotypes has been very difficult to explain genetically, as candidate CHD genes and gene variants are not always shared between all patients, may be associated with diverse phenotypes of varying severity, and may even be found in healthy people[2].  Therefore, being able to model candidate risk factor alleles and identify their contribution to heart development and CHD phenotypes would greatly increase our understanding of the etiology of CHD.

Farr and colleagues use precision genome editing to investigate how a putative human CHD gene variant (PBX3 p.A136V) functions in zebrafish to enhance the mutant phenotype of a known CHD-associated gene, Hand2.

The PBX3 variant p.A136V occurs in 2.6% of CHD patients, who display cardiac outflow tract malformations of varying severities, but the exact contribution of this variant to CHD phenotypes is unknown. After first comparing the sequences of human PBX3 with different zebrafish pbx genes and conducting a few preliminary experiments, Farr and colleagues concluded that zebrafish pbx4 was likely to be the functional equivalent of human PBX3, as it is the main pbx gene expressed in early zebrafish development, and is known to be required for proper myocardial morphogenesis and outflow tract development.

The pbx4scm14/scm14 fish appeared normal with no noticeable heart defects. By comparison, fish with a homozygous null mutation in pbx4 (pbx4b577/b557) died 5 days post fertilisation, with gross morphological heart defects. This lead the authors to conclude that the p.A136V variant might be only weakly hypomorphic, and its significance might only be unmasked in the presence of other CHD-associated mutations.

Therefore,  the authors crossed their pbx4scm14/scm14  fish to those with mutations in a known CHD gene hand2 (hand2s6/s6), which is a transcription factor known to be required for heart development and has been shown to interact with pbx4. They performed in situ hybridisation upon 24hpf zebrafish embryos, to investigate how the pbx4scm14 allele in both hand2s6/s6 and pbx4b577/b557 mutant backgrounds affects expression of the cardiac precursor marker myl7 (see Figure below). 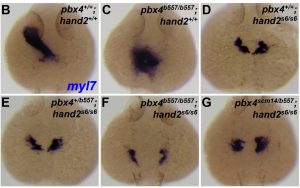 From preprint Figure 3, with kind permission from the authors

In wild type embryos (B) myl7 expression demarcates a normal heart tube. hand2 null mutants (D) have split myl7 domains, due to the failure of myocardial precursors to assemble and fuse at the midline.  This separation of myl7 domains is enhanced in pbx4 null;hand2 null double mutants (F).  pbx4scm14/scm14; hand2 null embryos do not have a significantly different phenotype to hand2 null mutants, so the p.A131V variant alone is insufficient to modify the hand2 null phenotype. However, the key result is that embryos in (G), which have one copy of the null pbx4 allele, plus one copy of the variant allele in a hand2 null background show enhanced separation of myl7 domains relative to those in (E) which have the same genotype but without the variant allele.  This same pattern was also seen in older embryos which were scored for heart defects –  pbx4scm14/b557;hand2s6/s6 embryos again had more severe myocardial fusion defects compared to both hand2s6/s6 or pbx4b577/+;hand2s6/s6 embryos.

Why I am highlighting this preprint

As mentioned above, I think this work is really exciting because it goes beyond a standard disease modelling approach of investigating a candidate disease factor in isolation, and shows that it is possible to model the contribution of risk alleles to existing disease-associated phenotypes. I think studies like this will be very important in conjunction with genome sequencing to identify key disease-causing mutations, and therefore possible therapies, for individual patients.

Also, from a broader techniques standpoint, the authors were very thorough with their methods for optimising the use of ssODNs to introduce the variant allele. This could be useful for other labs using similar techniques to introduce single nucleotide substitutions, or those investigating mutations which might produce very subtle effects.

As I was reading the manuscript, I must admit that I was rooting for the pbx4scm14/scm14; hand2s6/s6 embryos to have an enhanced hand2 mutant phenotype, but it was only when embryos also carried a pbx4 null allele that an effect was seen. As the authors mention in the discussion, this is a scenario that is unlikely to occur in human CHD cases. I wonder if CHD patients who carry the PBX3 p.A136V variant are also more likely to carry variants of other heart development genes, and whether these could be introduced into the pbx4scm14/scm14; hand2s6/s6 models to see if this modifies CHD phenotypes more strongly. It would also be interesting to see if the zebrafish pbx4 p.A131V variant might modify the effects of other CHD-associated genes more strongly than hand2.

Hopefully this lab and others can go on to investigate other CHD-associated variants using zebrafish models to build up a clearer understanding of how and why diverse CHD phenotypes occur, and how individual CHD patients can best be helped on an individual basis.