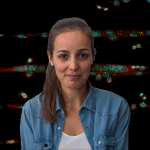 The centrosome is the main microtubule organizing organelle in most animal cells. The two centrioles in its core are duplicated in S-phase, giving rise to two additional “daughter” centrioles. Each new centriole remains associated with the respective older template, such that after mitosis a cell inherits two centrioles of different ages – the daughter made in the cycle just before, and a “mother” made two or more cycles ago. Once this cell reaches the S-phase, these centrioles become the mother and “grandmother”, respectively, upon duplication.

The three generations of centrioles can be distinguished based on specific identifiers: the youngest centrioles are enriched in daughter proteins (e.g. centrobin), whereas the oldest will have distal and subdistal appendages comprising several proteins. It was recently reported that asymmetric localization of centrobin at the daughter centriole is necessary for distal appendage recruitment in ciliated RPE cells1. Centrobin removal from mother centrioles in Drosophila neuroblasts is controlled by Polo kinase2 (PLK1),  which has also been reported to regulate and be regulated by appendage proteins3–6.

These results suggest an interplay between PLK1 and mother-daughter centriole identity establishment, and this is what Le Roux-Bordieu and colleagues investigated further in this preprint.

The authors used an RPE eGFP-centrin1 cell line, which allowed them to precisely resolve centriole numbers throughout the cell cycle7. During G1, centrobin localization was limited to the daughter centriole (soon-to-be mother). From S-phase onward, centrobin was present in all the newly formed daughters and was kept in the mother centriole of most cells. Interestingly, centrobin was even detected in the grandmother centriole of some cells, suggesting a more dynamic localization than previously thought. Only by metaphase was centrobin removed from most mothers and became restricted to daughter centrioles.

The centrinone assay also demonstrated that centrobin removal is not required for the recruitment of distal appendage proteins (OFD1 and CEP164). Inhibition of PLK1 for 24h impaired the recruitment of CEP164 (but not OFD1), indicating that PLK1 independently regulates centrobin and CEP164 localization. Strikingly, centrobin was present in all 4 centrioles in metaphase cells lacking the subdistal appendage proteins Cenexin/ODF2, Cep128, and Centriolin. These results suggest that PLK1 activity might be regulated by subdistal appendages, and indirectly affect centrobin localization. 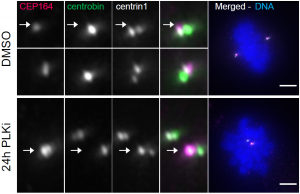 Ever since I started working with centrioles, I have been fascinated by the mother-daughter identity topic. There is something about a centriole being age-tagged at birth and maturing over the cell cycle. The authors of this work address this complex topic (usually hard to conceptualize) very clearly with an elegant experimental design.

It is interesting to see such a dynamic localization of centrobin after S-phase. Would you also expect to see centrobin localization in the mother centriole upon PLK1 inhibition in G1?

Would you imagine that fusing G1 cells with different “centriolar ages” would also lead to centrobin recruitment by the youngest?